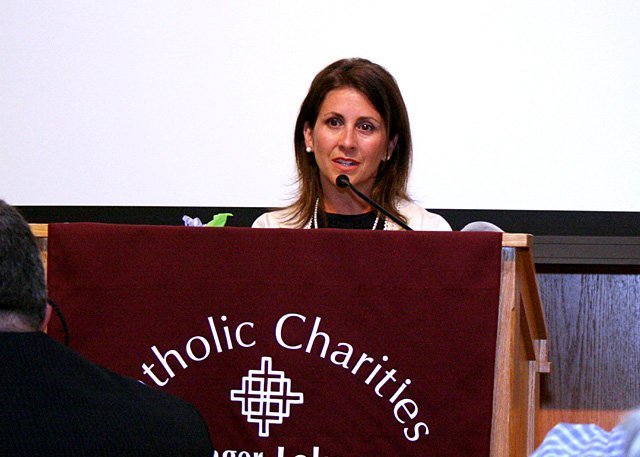 Liz Gilges accepts the Diocese of Rochester’s Vita Award during the June 16 Sharing the Light event at Hobart and William Smith Colleges in Geneva.

The Diocese of Rochester recently honored Canandaigua resident Liz Gilges for her commitment to the protection of human life from conception through natural death.

Bishop Salvatore R. Matano presented her with the diocese’s Vita Award during Catholic Charities of the Finger Lakes’ Sharing the Light Event, which was held June 16 at the Scandling Center on the campus of Hobart and William Smith Colleges in Geneva.

"I was completely surprised to receive this award, as I don’t think I have done anything special," Gilges later remarked.

Catholic Charities of the Finger Lakes officials felt otherwise, however, and nominated Gilges for the award, which is presented each year to individuals who have shown exemplary efforts to protect human life and promote understanding of the consistent-life ethic. Gilges has volunteered her time with a number of pro-life efforts and has demonstrated her commitment to upholding the dignity of life in her personal life as well,

"I feel strongly about protecting human life, as there is no greater gift from God than our very life," Gilges said.

Gilges, who is a mother of six and told the Catholic Courier she has always been pro-life, has helped organize bus trips from the Finger Lakes region to the March for Life in Washington, D.C. each January since 2006. She also is passionate about caring for those nearing the end of life and recently completed the training necessary for her to be a hospice volunteer at Light Hill Comfort Care Home, which is set to open in Canandaigua later this year.

"I absolutely love hospice, and feel it is more about training for life than death. I recommend the training for everyone, as at some point the knowledge will most likely become very practical. I find it a profound time to accompany someone at the end of their life," Gilges said.

Gilges is quite familiar with what it takes to care for someone who is nearing the end of life. Her firstborn daughter, Elie, was born in 1993 and was diagnosed with a brain tumor when she was just eight months old. After undergoing surgery she soon suffered a massive stroke that left her unable to walk, talk or care for herself. Elie was diagnosed as being in a persistent vegetative state, but that did not change the way Gilges and her husband, Kent, treated her.

"To me she was still my living, breathing, beautiful child and, perhaps more importantly, still God’s child," Gilges explained.

Under her parents’ loving care, Elie lived for nine years longer than doctors had predicted and passed away in March 2004 at the age of 10. Kent Gilges published his reflection on her life, death and effect on his family in a 2008 book titled A Grace Given.

The Gilges family belongs to St. Benedict Parish in Canandaigua and East Bloomfield, and Liz and Kent’s other children — Alex, Nicholas, Oliver, Hannah and Avery — attended St. Mary School in Canandaigua. The family has been a staunch supporter of the school and last summer hosted "Party With a Purpose" at their Canandaigua home. This large lawn party raised money to support both St. Mary School and Louverture Cleary School in Haiti. The Louverture Cleary School is run by The Haitian Project and is a Catholic, coeducational boarding school for talented and motivated students from Haitian families who otherwise could not afford to educate their children. The Gilges family has supported The Haitian Project for years and in 2014 took a mission trip to Haiti, where they worked alongside the school’s teachers and Haitian residents.

Gilges said being a mom to her six children is her greatest accomplishment, but she also enjoys supporting worthy causes in her spare time.

"Since I do not work outside the home, I am free to help whoever God puts in my path," she explained. "I consider it a luxury to have a husband who works hard to provide for us, so that I can reach out to others. I like to help those who are particularly suffering from illness or death of a loved one."

Gilges herself fell ill in 2011, when she was diagnosed with cancer. She was bedridden for six months following her diagnosis, and although she is healthy now, she is grateful for the opportunity her illness gave her to reflect on her life.

"I have had time to contemplate my own mortality. In doing so, I think it has helped me to appreciate how meaningful our life can and should be," she said.