Cancer tops causes of death in some counties - Catholic Courier 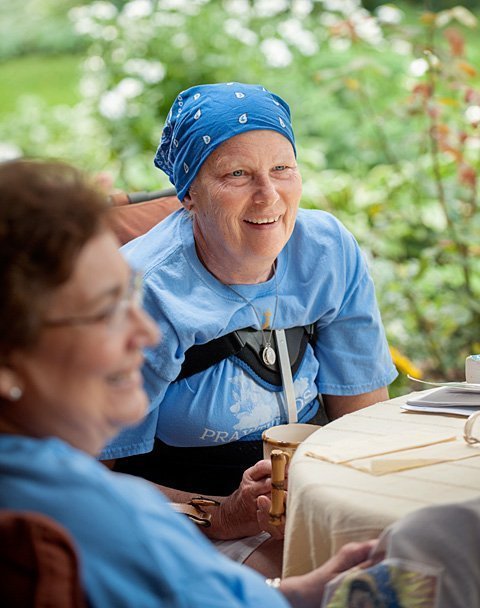 Virginia Tondryk (left) and Kathy Worboys, parishioners of St. Paul of theCross in Honeoye Falls, are battling leukemia and breast cancer, respec-tively. Above, they attend an Aug. 13 meeting of their prayer group.

Cancer has moved ahead of heart disease as the leading cause of death in some New York state counties, including Livingston, Monroe, Schuyler, Tioga, Tompkins and Wayne.

That’s according to 2011 age-adjusted vital statistics at the county level released in March by New York’s Department of Health. Age-adjusted death rates are used to make more accurate comparisons among communities with different age compositions, according to the state health department’s website.

Although heart disease has long been the top killer, death rates from heart disease have dropped substantially over the past decade, while death rates from cancer have dropped slightly, due to advances in treatment, early detection and preventive lifestyle changes, according to information from the American Cancer Society, the American Heart Association and the Centers for Disease Control and Prevention.

One reason for declines in cancer deaths is an increase in early diagnoses, cancer society officials said.

"The earlier (cancer is) caught, the better the outcome," said Amy S. Voelkl, director of the Decision Support team for the Lakes Region Office of the American Cancer Society in Rochester.

Cultural and socioeconomic disparities also exist in treatment, leading to disparities in mortality rates, LaRose said. For example, while death rates have dropped for nearly all types of cancers and among all races and ethnicities, Hispanic/Latinos in Monroe County have seen a 14.5 percent increase in mortality rates from colorectal cancer.

"Depending on socioeconomic circumstances, a patient may have better access to treatments or in some cases may not have access to the treatments," LaRose said. "That’s creating disparity right there."

LaRose said some people may not be aware that free screenings for breast, cervical and colorectal cancer for uninsured and underinsured individuals — as well as legal and supportive services — are made available in every county through the New York department of health’s cancer services program. Call toll free 1-866-442-2262 for details.

In addition to getting screenings when recommended, patients can make lifestyle changes to dramatically reduce their cancer risk.

"Two out of three cancers can be prevented through diet, physical activity and not smoking," LaRose said. "One-third of cancers are caused by smoking."

One local Catholic fighting cancer says people should not forget to pray, in addition to focusing on prevention. Diagnosed this spring with a stage 4 recurrence of breast cancer that had spread to her bones, Kathy Worboys of Honeoye Falls said she is fighting her disease with prayer and pain relief. That also is the prescription for Virginia Tondryk, a friend and fellow prayer group member who was diagnosed with leukemia on the same day Worboys learned her cancer had returned.

Worboys and Tondryk, both members of St. Paul of the Cross Parish in Honeoye Falls, say they rely on their prayer group, Daughters of the Blessed Mother, to help support them through daily difficulties.

"I shouldn’t even be here," Worboys said, noting that she was marking six months since her diagnosis.

She said she is unafraid of death.