Candle calls for prayer for the unborn - Catholic Courier 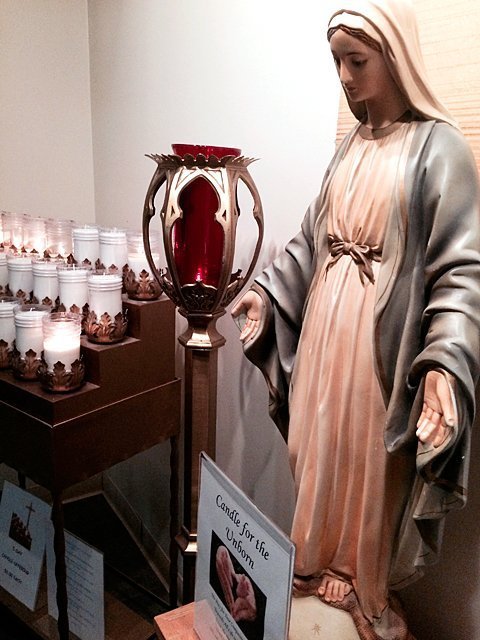 A Candle for the Unborn, encased in red glass, went up at the beginning of 2016 in the votive-candle area at St. Mary of the Lake Church in Watkins Glen.

WATKINS GLEN — Emphasis on the sanctity of human life rings loud and clear throughout Schuyler Catholic Community, thanks in large part to efforts by the cluster’s United for Life Committee.

In recent months a table near an entrance to St. Mary of the Lake Church has displayed pro-life pamphlets, booklets and other information. Parish members also have raised funds for a crisis pregnancy center; featured numerous bulletin notices offering reflections on life issues; and engaged in pro-life activities in the wider community.

While such initiatives strive to incite action and thought, a new addition at St. Mary addresses the spiritual side of this movement.

It comes in the form of a Candle for the Unborn, encased in red glass and perched on a special stand, located in the church’s votive-candle area. Next to the candle is a sign displaying a prayer for compassionate love toward all life in the womb from conception to the moment of birth.

The Candle for the Unborn was put in place at the beginning of 2016. Deacon Thomas Ruda, pastoral associate for Schuyler Catholic Community — St. Mary along with St. Benedict in Odessa — said the candle is meant to spur profound prayer about God’s gift of life.

"We want to connect with the person deep within. The prayer, it sets our heart back to true north," Deacon Ruda said, adding that people who approach the candle are encouraged to offer prayers related to a difficult pregnancy; medical problems related to a birth; a healthy newborn child; a mother considering abortion, a child who is aborted; or the family into which a child is to be born.

Deacon Ruda, along with United for Life members Warren Klick and his wife, Anne Dziuba, noted that the candle serves as a gentle reminder of all Catholics’ obligation to support the unborn.

"This starts a conversation in a person’s heart," Klick said. "It’s a quiet way of inviting anyone who stops back here into it."

"If we’re doing our part, then the rest is up to the Holy Spirit," Deacon Ruda remarked. He added that the candle will hopefully result in "the unborn in all of us to come out," explaining that Christ must emerge in our own lives in a way that "is no longer our old self but Christ" — an awakening that affects life-related attitudes not only toward the unborn but also in our use of natural resources; valuing money vs. the gift of life; opinions on the death penalty and physician-assisted suicide; and treatment of the disabled.

Dziuba added that praying before the Candle for the Unborn can help people appreciate the wisdom of church teachings on these issues.

The candle is one of several ways that United for Life members promote their priorities. For instance, Klick and Dziuba also attended the March for Life in Washington, D.C., this past Jan. 22, while a Litany for Life was held back at St. Mary. Later that weekend, a Celebrate Life Baby Shower took place at St. Mary and St. Benedict, with gifts and cash donations being collected for the Southern Tier Pregnancy Resource Center.

Klick and Dziuba further noted that Schuyler parishioners are involved in the Life Chain held annually in Elmira each October, as well as the 40 Days for Life initiative in Ithaca that takes place twice per year including the most recent 40 Days that concluded March 20.

Through all of these efforts, Klick believes that progress is being made in the pro-life movement — a cause that has become more urgent since the Roe v Wade Supreme Court decision in 1973 made abortion legal in the United States.

"Effects are being felt. You just keep plugging along," Klick said.

"This is beyond any one individual. We must come together as a community," he said.