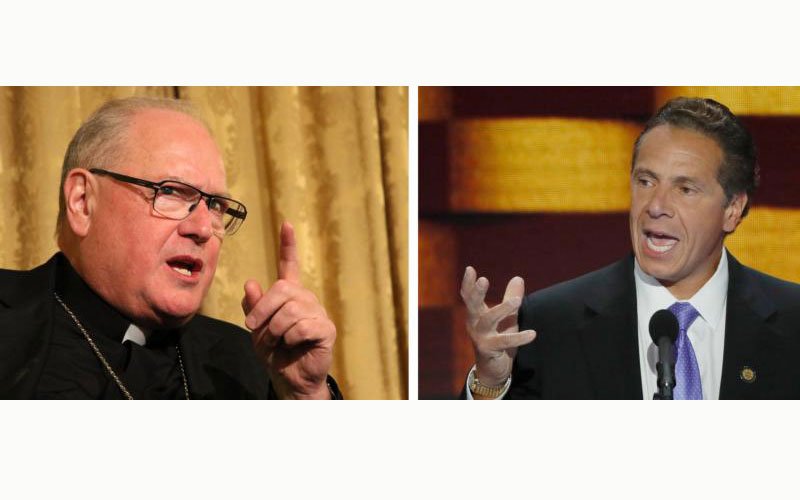 New York Cardinal Timothy M. Dolan and New York Gov. Andrew Cuomo are seen in a 2017 and 2016 combination photo. On SiriusXM radio Jan. 29, 2019, Cardinal Dolan took issue with Cuomo on several fronts, including the governor's claim he is more in tune with Pope Francis than the bishops are when it comes to advocating for victims of sex abuse. (CNS photo by Mike Segar/Reuters and Greg Shemitz)

WASHINGTON (CNS) — On Jan. 22, the New York Statehouse burst into cheers after a landmark abortion bill had been passed.

The Reproductive Health Act, or RHA, most notably removed abortion from New York’s criminal code and now permits abortions with very few restrictions at any week of a pregnancy.

New York Gov. Andrew Cuomo had been one of the bill’s strongest supporters. He called its passage “a giant step forward in the hard-fought battle to ensure a woman’s right to make her own decisions about her own personal health” and additionally ordered that the needle atop the One World Trade Center — the tallest building in the United States — be lit pink in celebration.

Cuomo, a Catholic, drew the ire of his fellow Catholics in New York and across the country for his advocacy against church teaching on the issue.

Some petitioned Cardinal Timothy M. Dolan of New York to excommunicate Cuomo, but they were disappointed when a spokesperson for the cardinal’s office released a statement on Twitter, which suggested that “under canon law, excommunication is not an appropriate response to a politician who supports or votes for legislation advancing abortion” and that issues regarding abortion should be addressed “personally and directly” with offending politicians.

The statement laid out “general principles” and did not address any specific individual.

So what does the Code of Canon Law say about excommunication for public servants who do not accept elements of the Catholic Church’s teaching?

Brennan pointed to Canon 1398, which states: “A person who procures a completed abortion incurs a ‘latae sententiae’ excommunication”; “latae sententiae” means “automatic.” While this provision does not mention politicians, Brennan mentioned that “canon law does acknowledge the role of an accomplice in moral evil.”

So would Catholic policymakers who ardently support legal abortion qualify as accomplices?

For an answer to this question, Brennan turned to Canon 19, which reads in part: “If a custom or an express prescript of universal or particular law is lacking in a certain matter, a case … must be resolved in light of … the common and constant opinion of learned persons.”

According to him, “the overwhelming view among learned people … is that it (Canon 1398) does not apply to legislators.”

So Cardinal Dolan’s spokesperson seems to have it correct at first glance. However, Brennan criticized the first point of the representative’s statement: “First, excommunication should not be used as a weapon. Too often, I fear, those who call for someone’s excommunication do so out of anger or frustration.”

Additionally, Brennan took aim at the spokesperson’s last point: “Fourth, and finally … I do not believe that excommunication would be effective as many politicians would welcome it as a sign of their refusal to be ‘bullied by the church,’ thinking it would therefore give them a political advantage.”

“The purpose of the bishops in administering canon law is not from the standpoint of public relations,” said Brennan, who related that including considerations about the church’s public image “sound(ed) prudential” as opposed to morally correct and dulled the overall credibility of the statement.

In remarks Jan. 28 on “Fox & Friends,” Cardinal Dolan seemed to indicate that excommunicating Cuomo would indeed hurt the church, saying it would “be giving ammo to our enemies.” “We have a governor that uses his dissent from church teachings as applause lines. … He’s not going to be moved by this. So what would be the use?”

When Brennan was asked about Catholic prelates, like Archbishop John Francis Rummel of New Orleans, and Cardinal Joseph Ritter of St. Louis, who, in the age of segregation, regularly threatened to excommunicate members of their flock — including politicians — who did not enforce the church’s teaching against segregation, he held up Canon 1399 as an example of a “catch-all” that would endorse that kind of action.

Presumably, this law could support Cuomo’s excommunication as well.

The provision reads, “… the external violation of a divine or canonical law can be punished by a just penalty only when the special gravity of the violation demands punishment and there is an urgent need to prevent or repair scandals.” Brennan told CNS there was “greater willingness among bishops back then” to exercise this sort of discretion and that most bishops today will use Canon 915 to forbid dissenting Catholic politicians from receiving Communion instead.

But some bishops argued that excommunication would be the right move at this time.

However, he clarified his position the following day in a statement: “My remarks about excommunication for lawmakers are my personal views,” he said, though he added that he still feels “it is hideous and repulsive that a child can be killed by abortion minutes before it comes to term.”