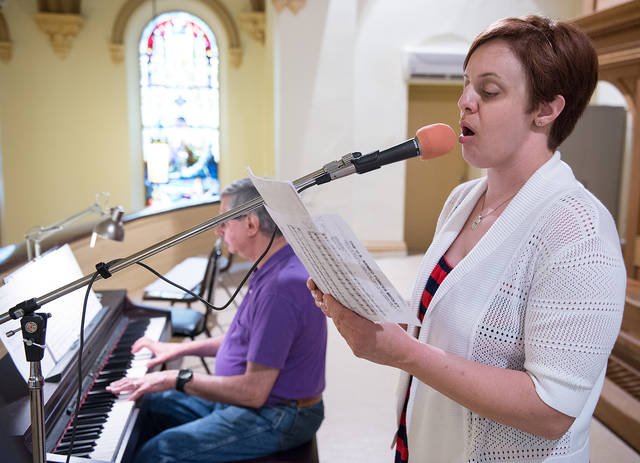 Cantor Samantha Hockey sings during the 11:15 a.m. Mass at Holy Family Church in Auburn May 27. Hockey recently received a scholarship to continue her education in music. 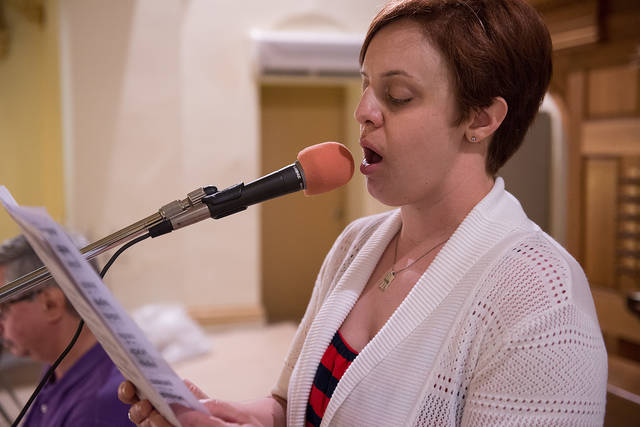 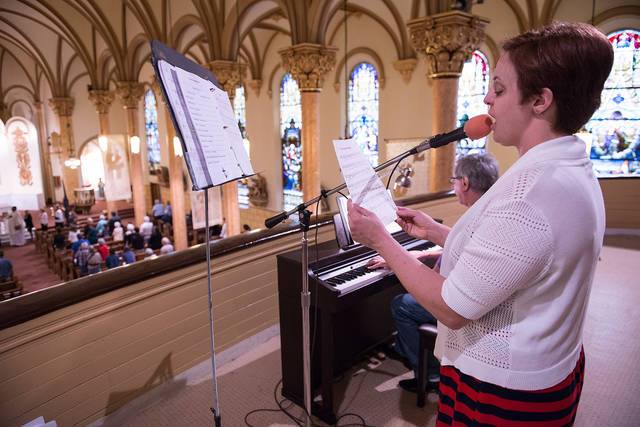 A scholarship from the Ginny Miller Scholarship Fund for Music Ministers will help Samantha Hockey continue her studies at Hochstein School of Music and Dance in Rochester. Hockey is a cantor at Holy Family Church in Auburn.

Music has been a constant, calming presence in Samantha Hockey’s life ever since she was a little girl.

“I always joke with my organist (at Holy Family Parish) and say I would be lost if I didn’t sing or have music in my life in some way. It’s kind of like my sanity saver,” remarked Hockey, who cantors each Sunday at the Auburn parish’s 11:15 a.m. Mass.

Hockey is one of seven adults throughout the Diocese of Rochester to have recently received a financial award from the Ginny Miller Scholarship Fund for Music Ministers, which encourages the formation of music ministers in the diocese. These awards, as well as the St. Cecilia Awards for high-school music ministers, were presented during a ceremony at Sacred Heart Cathedral in late April, although, in an interesting coincidence, Hockey was unable to attend the ceremony because she was singing at a Mass at Holy Family.

Hockey has been cantoring at Holy Family for five years, but she’s been singing in church for much longer than that. She was just a child when she realized she loved to sing, a realization that dawned on her while she was attending Mass with her grandmother at St. Hyacinth Church in Auburn.

“My grandma was a big part of it. She used to sing, and I remember singing with her in the pews, and it just kind of happened. It’s just been music in my blood, I guess,” Hockey recalled. “For as long as I can remember, I always said if there’s nothing else I can do, I’m going to sing.”

Hockey studied music as a young adult and minored in music during her studies at Nazareth College in Pittsford. Although she did not pursue a full-time job in the music field, her job at a local preschool presents her with plenty of opportunities to sing, and her love of music is well-known among both her colleagues and her young students.

“Everybody at the preschool where I work jokes and calls me the music lady,” Hockey said.

When she’s not working at the preschool, Hockey frequently may be found at Holy Family. Not only does she cantor at Mass every week, but she also sings at funerals and a number of other extra Masses.

“I think music has made my faith stronger. I’ve always liked the saying (attributed to St. Augustine) that, ‘He who sings prays twice,’” Hockey said.

Hockey also regularly practices with Holy Family’s organist, Tom Techman, who has been teaching her music theory in his spare time.

“He takes time each week when we rehearse to break things down step by step so I know exactly what I am doing. He also creates activities for me to practice my music theory and strengthen my ear training,” Hockey wrote in her application essay for the Ginny Miller Scholarship Fund.

Techman represents one half of what Hockey calls her “music bookends.” The other half is Sandra Boysen Sluberski, who teaches at Hochstein School of Music and Dance in Rochester. Hockey has been taking voice lessons with Boysen Sluberski since 2006

“Dr. Boysen Sluberski takes time out of each lesson to allow me to practice what I will be singing at Holy Family during the weekend and answer any additional questions I may have,” Hockey wrote in her application essay.

Hockey said she feels lucky to be able to learn from such accomplished and helpful musicians. It was Techman, in fact, who suggested she apply for the scholarship funds. Hockey did so in the hopes of receiving funds to use to further her musical education at Hochstein.

Hockey learned in April that she’d won a scholarship and would be receiving $300 to put toward her musical education.

“When we applied we didn’t know how much it was for. It was a very nice surprise,” she remarked.

Hockey is excited to be able to continue her studies at Hochstein, which she said in turn will benefit the Holy Family community.

“It’s helping me better serve my church community because it helps me become a better musician and feel more confident in my musicianship,” Hockey said.