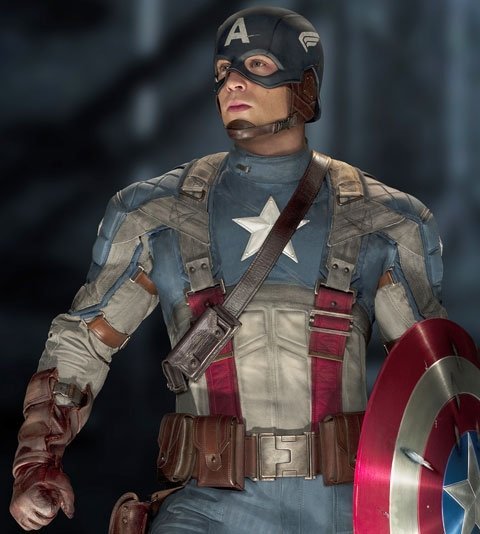 NEW YORK (CNS) — Out of the summer glut of superhero movies, "Captain America: The First Avenger" (Paramount) distinguishes itself by a complete absence of cynicism, a crackling undercurrent of dry wit, and the classical purity of its golden-age Hollywood references. In keeping with its nostalgic tone, moreover, this comic book adaptation’s mostly unobjectionable content also harkens back to more innocent times.

It helps, of course, that in relating their origins story of the titular character — set during World War II — director Joe Johnston and screenwriters Christopher Markus and Stephen McFeely display a warm affinity for America in the 1940s. Thus, along with the usual nods to other figures in the Marvel Comics stable, this epic features allusions to Betty Grable musicals and the Danny Kaye wartime film "Up in Arms."

The old saying, "They don’t make ’em like that anymore," notwithstanding, in this case they really have — and most intelligently. As a result, despite some scenes of destruction, "Captain America" registers, for the most part, as full-on family entertainment of the old school.

Chris Evans plays Steve Rogers, a 90-pound wannabe soldier from Brooklyn transformed into a muscular super-warrior in the Dr. Frankenstein-like lab of Dr. Abraham Erskine (Stanley Tucci), whose ultimate goal is the creation of battalions of such fearless, gene-altered fighters.

(As the historical context makes clear, this is no distasteful, potentially unsettling attempt at creating a master race; it’s simply a case of better fighting through chemistry.)

A Nazi agent, however, destroys Erskine’s technology, thus breaking the mold in which Steve’s new persona was formed, and leaving him an inimitable prototype.

Now what to do? First, send Steve, in his Captain America costume, and accompanied by a bevy of chorines, on a war bonds tour. But this fails to satisfy Steve, who, it seems, is no mere song-and-dance man. He wants to fight the Germans, and gets his chance when he’s sent overseas to entertain the boys in the field.

Gruff Col. Chester Phillips (Tommy Lee Jones) gives Steve his own platoon, and off he goes, armed with a bulletproof red, white, and blue shield, and motivated by a suitably broadminded motto: "I don’t like bullies. I don’t care where they’re from."

Steve and his cohorts — including his newfound love interest, fetching scientist Peggy Carter (Hayley Atwell) — end up fighting not the German military, but rogue Nazi Johann Schmidt (Hugo Weaving). Schmidt, it develops, is actually a satanic character called Red Skull. Acting in cahoots with evil scientist Arnim Zola (Toby Jones), Schmidt is out to destroy the world — or at least the eastern third of the United States.

Schmidt’s source of power: a magic crystal that used to belong to the Norse gods. His preferred music: Wagner’s operas. The filmmakers, as you can tell from such details, have brushed up not just on their old movies, but on their cultural cliches as well.

The film contains much action violence, including gunplay. The Catholic News Service classification is A-II — adults and adolescents. The Motion Picture Association of America rating is PG-13 — parents strongly cautioned. Some material may be inappropriate for children under 13.