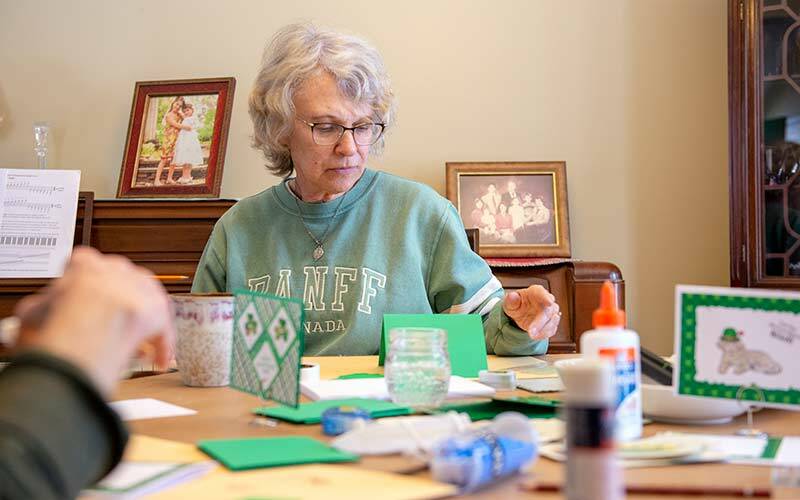 Lisa Guernsey, a parishioner of St. Christopher Parish in North Chili, crafts greeting cards at her home in Churchville Feb. 9 with other members of the parish’s card ministry. (Courier photo by Jeff Witherow) 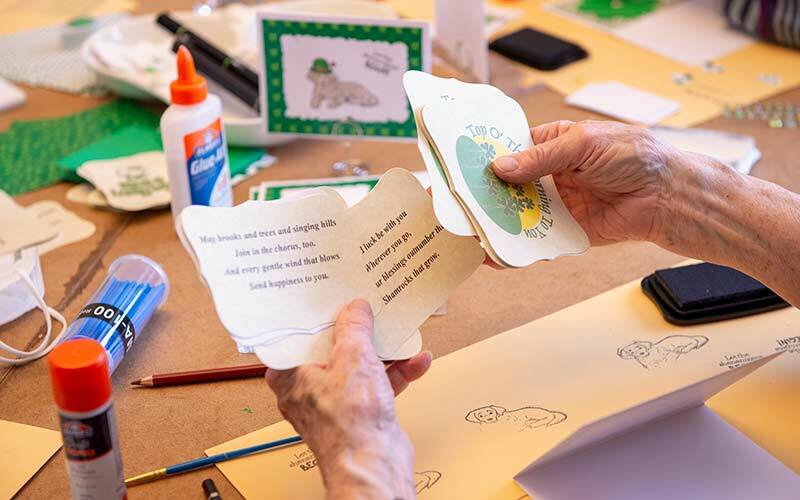 Greeting-card ministry connects to those unable to attend church

CHURCHVILLE — With St. Patrick’s Day still more than a month off, the festive nature of that occasion was already filling Lisa Guernsey’s house.

Mixing artistic efforts with lively conversation, their creations featured such sayings as “May the Luck o’ the Irish be yours!” and “May good luck be with you wherever you go/And your blessings outnumber the shamrocks you grow.”

The designing get-together was part of a thriving ministry at North Chili’s St. Christopher Parish, through which greeting cards are sent to people who are sick, shut-ins, having surgery or experiencing other difficulties. Cards made that day at Guernsey’s home were eventually forwarded to other ministry volunteers from the parish, who in turn wrote personalized notes on the cards and mailed them in time to arrive for St. Patrick’s Day March 17.

Mailings are done by the card ministry on a monthly basis. Guernsey noted that the greeting cards are typically store-bought, so last year she conceived the idea of expanding the effort to occasionally design theme cards for such special occasions as St. Patrick’s Day.

“I thought, wouldn’t it be nice if we could do some homemade cards? It might be a fun way to get people together a couple of times a year,” said Guernsey, explaining that she offered her home as a gathering place, since she enjoys artwork and has many of the necessary supplies already on hand. She noted that another volunteer, Jeanne Alexander, comes over a week ahead of time to help prepare for the group gathering. The ministry also made Christmas cards this past October, and is looking to enact a similar effort for the Fourth of July later this year.

“It’s nice to get together,” remarked Janet Sheflin, a volunteer.

Although Guernsey said no artistic experience is necessary, Maureen Emerson acknowledged that she was initially hesitant about joining the group.

Names of card recipients are acquired through a weekly parish-bulletin listing of people in need of prayer. The ministry also sends cards to people who might be grieving the deaths of loved ones. Guernsey added that cards, as well as welcoming gifts, are earmarked for newcomers to the parish. Others receiving cards range from a family that recently had to vacate their home due to a fire, to a woman with dementia who checks her mailbox daily for a card.

Fran Powarzynski, for one, has been involved in the ministry both as a volunteer and as a recipient. While creating St. Patrick’s Day cards in early March, she recalled that she received cards of her own after her husband died nearly five years ago. She added that her son, who suffered a severe heart attack approximately a year ago, received cards at the rehabilitation facility where he lives out of town, as well as a pillow from the parish’s Eucharia Ministry, which specializes in knitting and crocheting items for the same type of people served by the card ministry.

St. Christopher’s efforts are similar to the “Sonshine Ministry” at neighboring St. John the Evangelist Parish in Spencerport, where volunteers gather regularly in the parish center to sign and address cards for the homebound and sick. Powarzynski noted the importance of receiving such gestures, saying, “It just makes you feel connected to everybody.”

Another St. Christopher card-ministry volunteer, Maggie Choy, added that this type of outreach can be meaningful for the card-issuers as well as the recipients.

“There’s a lot of love and time that goes into this. These (cards) are pretty special,” she remarked. “If I got something like this in the mail, I would feel really, really cared for.”