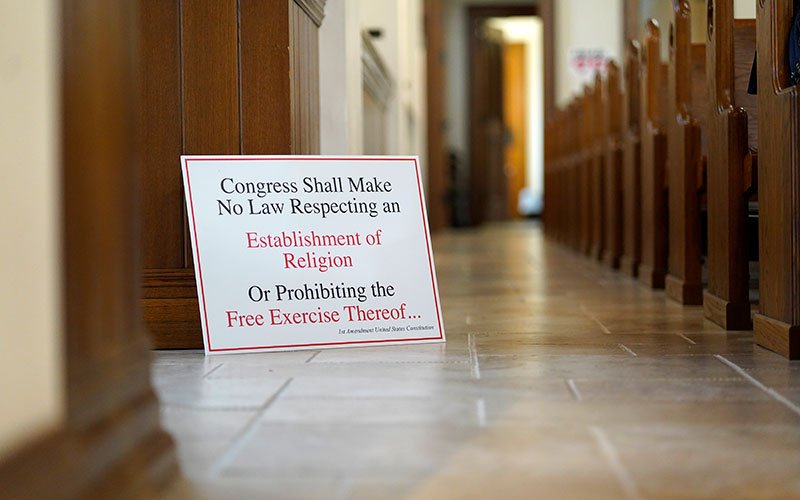 A placard highlighting words from the U.S. Constitution's First Amendment is seen during the recitation of the "Rosary for America" on National Religious Freedom Sunday Jan. 15, 2023, at St. Therese of Lisieux in Montauk, N.Y. The event, which was sponsored by Catholics for Freedom of Religion, took place the day before Religious Freedom Day. (OSV News photo by Gregory A. Shemitz)

Cardinal Timothy M. Dolan of New York, chair of the U.S. Conference of Catholic Bishops’ Committee for Religious Liberty, said in a statement, “Catholic Christians engage political life in various ways and at different levels.” He noted the responsibility of lay Catholics to “vote, advocate and serve in public office,” and the role of bishops and clergy “to form consciences, both of lay voters and officials.”

“What informs this engagement?” Cardinal Dolan said. “Are we motivated by a desire for power — to control the levers of government? Are we a political party, working to protect our own interests?”

Cardinal Dolan cited the work of Pope Benedict, who died Dec. 31, saying his “legacy especially comes to mind in these recent weeks.”

“He sought to show how the church’s mission in political life is to bear witness to the truth, particularly the truth about human nature and the dignity of all persons,” Cardinal Dolan said. “As he put it, ‘Fidelity to man requires fidelity to the truth, which alone is the guarantee of freedom and of the possibility of integral human development. For this reason the church searches for truth, proclaims it tirelessly and recognizes it wherever it is manifested. This mission of truth is something that the church can never renounce.'”

“Prioritizing reason and truth in politics is a challenge,” Cardinal Dolan said, citing Pope Francis. The pontiff condemned in his encyclical “Fratelli Tutti” what he called “a perverse and barren way of thinking” where ultimately “the law of the strongest prevails.”

“Good and evil no longer exist in themselves; there is only a calculus of benefits and burdens,” the pope said in his critique. “As a result of the displacement of moral reasoning, the law is no longer seen as reflecting a fundamental notion of justice but as mirroring notions currently in vogue.”

Speaking the truth in controversial issues

Cardinal Dolan said that the truth of controversial issues like marriage, abortion and the dignity of every person, “can be known by reason without the aid of faith.”

“When these truths come under attack, religious freedom is not an escape route, as if we could watch the common good be harmed so long as we obtain religious exemptions,” Cardinal Dolan said. “Indeed, if we abandon the priority of truth, natural law, human nature, and the common good, then we abandon freedom itself.”

Cardinal Dolan called for Catholics to “dedicate ourselves to the cultivation of virtue to which freedom calls us, particularly the virtue of fortitude, that we may patiently and courageously bear witness to the truth in our public life. In this way, we will promote true freedom and bless our great country.”

Tags: NY Catholics, USCCB
Copyright © 2023 OSV News / Our Sunday Visitor, Inc. All rights reserved. Linking is encouraged, but republishing or redistributing, including by framing or similar means, without the publisher's prior written permission is prohibited.