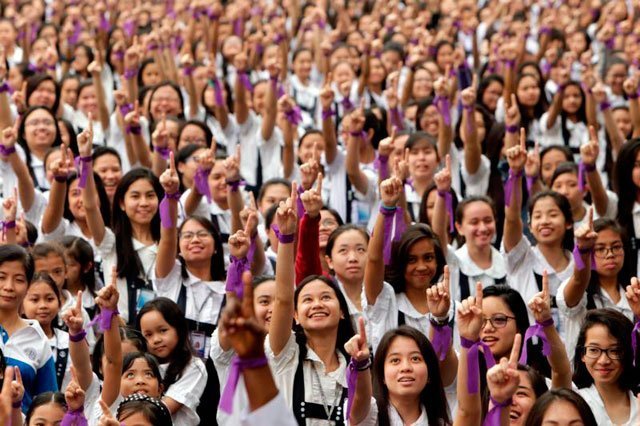 Philippine students inside an all-girl Catholic school in Manila, Philippines, demand an end to violence against women and girls Feb. 13. Cardinal Giuseppe Versaldi, head of the Congregation for Catholic Education, said Catholic schools need to boldly proclaim values.
By Carol Glatz
Catholic News Service
VATICAN CITY (CNS) — Strong Catholic identity for Catholic schools and educational institutes depends on fostering proactive, creative and charitable witnesses of God’s love and Gospel values, not defending abstract ideologies, said the head of the Congregation for Catholic Education.
Catholic identity must recognize the major mission of evangelization is "salvation and not conflict," said Cardinal Giuseppe Versaldi, the congregation’s prefect.
"If one uses an abstract rationality, one heads for an ideological battle that does not take into account the essence of the proclamation of the Gospel, which is for people, not for ideas," he said at a Vatican news conference Nov. 13.
The cardinal and others were giving a preview of a world congress sponsored by the congregation titled, "Educating Today and Tomorrow. A Renewing Passion." Some 2,500 people had signed up for the gathering scheduled for Nov. 18-21 at the Vatican and Castel Gandolfo.
To mark the 50th anniversary of the Second Vatican Council’s Declaration On Christian Education and the 25th anniversary of the apostolic constitution
"Ex Corde Ecclesiae," the world congress was meant to reinvigorate the church’s commitment to education and respond to the many challenges facing its mission.
Some of those challenges, gleaned from a three-year-long process of input from experts, seminars and a questionnaire sent to church leaders involved in education worldwide, included greater study and reflection on the identity and mission of Catholic schools and universities.
Italian Archbishop Angelo Zani, secretary of the Congregation for Catholic Education, told reporters that a growing number of students at many Catholic schools are not Catholic or baptized Christians. In some parts of the world, 98 percent of the student body may belong to another religion.
The question of "who are we, what are we doing?" then arises, when it comes to the responsibility to evangelize and promote Christian values, he said.
When asked about how gender theory and greater acceptance of homosexual persons in the larger culture would impact discussions of Catholic identity during the congress, Cardinal Versaldi said Christian identity "cannot be separated from dialogue."
Proclaiming the Gospel is an invitation, a proposal, which necessitates understanding who the other person is, which in turn requires listening, engaging them with explanations of the Christian faith and guiding them along a path of seeking the truth, he said.
If, on the other hand, the approach is "defensive," he said, the brandishing of truth "from above, from afar," then that "becomes ideology or at least perceived as such," he said.
What is more successful in many educational institutions, he said, is an identity based on "witnessing charity" in which Catholic administrators, faculty and students "are able to witness charity in dialogue, in respect for the other, in making the faith intelligent and not provocative. Then you see the ice melt, the walls come down."
"Instead, when one begins with the idea of defending concepts," he said, one "reinforces conflict and, on our part, one isn’t able to seem credible," missing the opportunity to keep evangelizing.
"Identity, in a defensive sense brings conflict," he said, but identity as being loving witnesses "seems to me to be the identity that wins out."
Copyright © 2022 Catholic News Service, Inc. All rights reserved. Linking is encouraged, but republishing or redistributing, including by framing or similar means, without the publisher's prior written permission is prohibited.