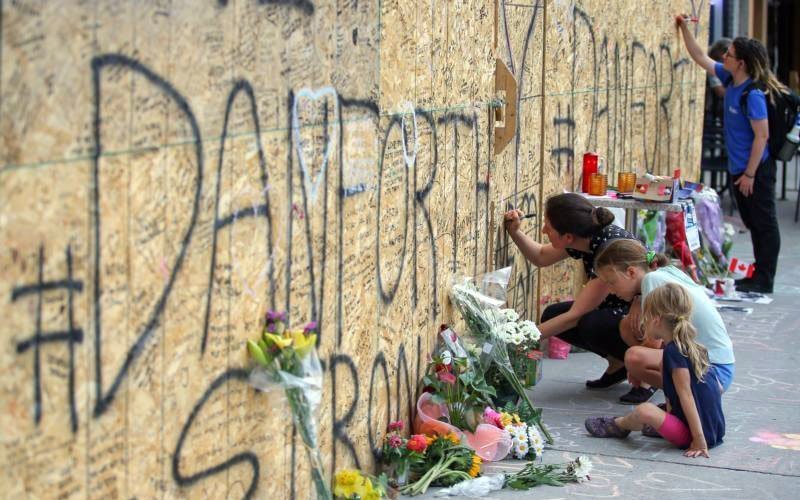 People write messages on construction boarding July 24 after a mass shooting in the Greektown area on Danforth Avenue in Toronto. Cardinal Thomas Collins of Toronto urged people to pray with him for the victims of a shooting spree that claimed three lives, including a 10-year-old girl, late July 22. (CNS photo by Chris Helgren/Reuters)

TORONTO (CNS) — Cardinal Thomas Collins of Toronto urged people to pray with him for the victims of a shooting spree that claimed three lives, including a 10-year-old girl, late July 22.

An 18-year-old woman, Reese Fallon, also was killed in the rampage on Toronto’s Danforth Avenue, the center of the city’s Greek community. The incident left 13 others injured, according to police.

Fallon recently graduated from high school and was planning to study nursing at McMaster University in the fall.

Authorities said the 29-year-old gunman, Faisal Hussain of Toronto, also is dead, though it’s not clear if he was shot by police or died of a self-inflicted wound. His family said he suffered from severe mental illness.

“Please join me in praying for all those injured and killed in the wake of the Sunday evening Danforth shooting,” Collins said in a statement released to The Catholic Register, Canada’s national Catholic newspaper. “I will be asking all Archdiocese of Toronto churches to offer a special prayer intention for victims of violence in our community. Let us unite in our comfort and care for those who are hurting today.”

A vigil was held at Calvary Church July 23, just blocks from the shooting scene. Another interfaith vigil was planned for July 25. The candlelight service was to begin at Danforth Church, followed by a procession to the site of the shooting.

Toronto hospitals treated 13 shooting victims, who range in age from 10 to 59. Eight of the victims are female. Injuries ranged from minor to critical, according to authorities.

Emergency services, including police, fire and ambulance, responded shortly after 10 p.m. to reports of a man dressed in black with a messenger bag slung over his shoulder walking down the street shooting into restaurants with a handgun.

Responding officers exchanged gunfire with the gunman on Bowden Street before he fled and was later found dead on Danforth Avenue, according to Ontario’s Special Investigations Unit.

Swan is associate editor of The Catholic Register in Toronto.