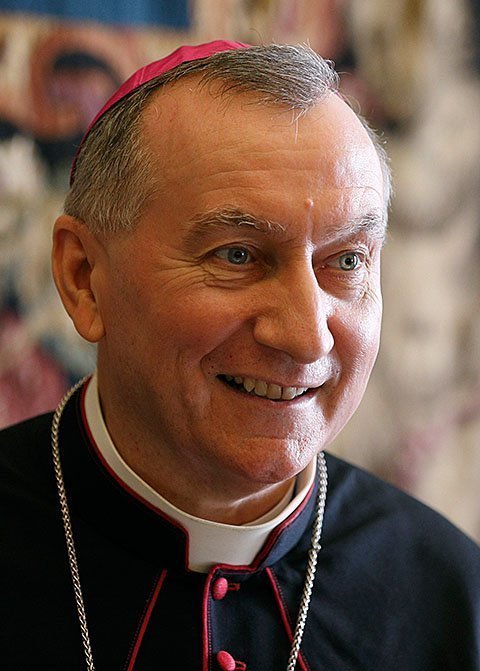 Italian Archbishop Pietro Parolin, Vatican secretary of state, is among 19 new cardinals named by Pope Francis Jan. 12. He is pictured during a meeting at the Vatican Nov. 18, 2013.

VATICAN CITY (CNS) — In his dual roles as coordinator of the Roman Curia and chief Vatican diplomat, Cardinal-designate Pietro Parolin has said he hopes to imitate the joy and the simplicity with which Pope Francis has carried out his ministry.

The pope announced Jan. 12 that Archbishop Parolin, his secretary of state, was one of the 19 churchmen he would make cardinals Feb. 22.

Cardinal-designate Parolin, who will celebrate his 59th birthday Jan. 17, officially became secretary of state Oct. 15, but his first day in the office was delayed by a month after he underwent surgery during a visit to his home in northern Italy.

At the time of his appointment to the top Curia post, he was the Vatican nuncio to Venezuela. He told reporters he was surprised Pope Francis chose him to be secretary of state, a role that makes him the pope’s chief aide.

"I see how he carries out his role with great joy, and I hope this joy, this simplicity of spirit will infect me," he said.

In a Sept. 6 interview with the Venezuelan Catholic newspaper, Diario Catolico, he said the Vatican’s success in international diplomacy has been due to the fact that Vatican diplomatic efforts are not tied to national interests, but to "the well-being of all humanity."

The secretary of state coordinates the work of the Roman Curia, oversees the operation of the Vatican press office and newspaper, coordinates the preparation and publication of papal documents, and supervises the work of Vatican nuncios in their relations with Catholic communities in individual countries and with national governments.

Until his appointment as nuncio to Venezuela in 2009, the cardinal-designate worked in the Vatican Secretariat of State. For several years, he led Vatican delegations to Vietnam to discuss church-state issues with the country’s communist government, a process that eventually led Vietnam to accept a nonresident papal representative to the country. The move was widely seen as a step toward establishing full diplomatic relations.

He also represented the Vatican at a variety of international conferences, including meetings on climate change, on human trafficking and on the Israeli-Palestinian conflict. He led the Vatican delegation to the 2007 Middle East peace conference in Annapolis, Md.

At a news conference in 2006, Archbishop Parolin said that through the nuncios and other Vatican diplomats present in each country, the church and the pope show people they are always near and that Christians — no matter how small their numbers — are not alone in the world.

Cardinal-designate Parolin was born Jan. 17, 1955, in Schiavon, Italy, and was ordained to the priesthood in 1980 for the Diocese of Vicenza. He studied at the Vatican diplomatic academy while earning a degree in canon law from the Pontifical Gregorian University. In 1986, he began working at Vatican embassies, serving in Nigeria and in Mexico before moving to the Vatican Secretariat of State. He was named undersecretary for foreign relations in 2002.