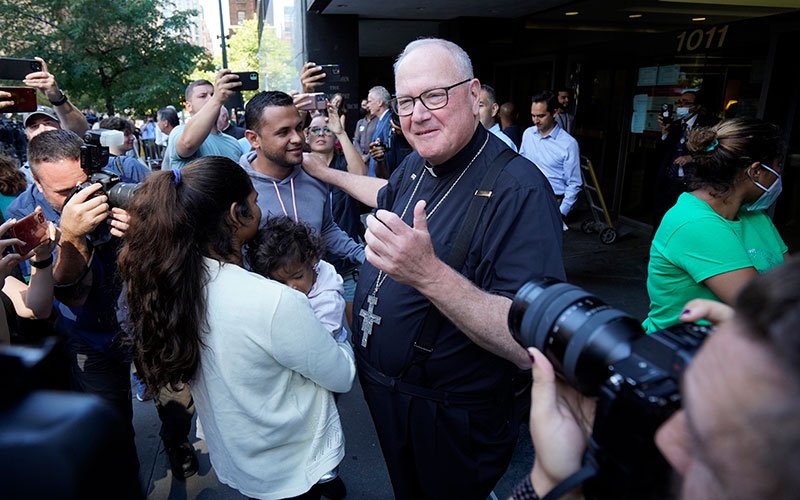 New York Cardinal Timothy M. Dolan greets a family from Venezuela seeking asylum in the U.S. prior to a news conference outside the Archdiocese of New York's headquarters in New York City Aug. 16, 2022. (CNS photo by Gregory A. Shemitz)

NEW YORK (CNS) — The Catholic Church’s perspective on the needs of migrant families arriving in New York City on buses from Texas is to see them “with the eyes of Jesus,” Cardinal Timothy M. Dolan told reporters at a news briefing Aug. 16.

“He’s the one who said to us, ‘When I was a stranger … an immigrant, you welcomed me,'” the cardinal said.

“Our perspective is not the political perspective” others may have about what has led to huge numbers of asylum-seekers from dozens of countries crossing into the United States from Mexico, he said. “Our perspective is to help them … (with) a sense of honor that we are able to help these people in whom we see the face of God.”

Before the briefing, Cardinal Dolan and Msgr. Kevin Sullivan, executive director of Catholic Charities of the Archdiocese of New York, met privately with several individuals and families who had arrived in recent days on buses sent by Texas Gov. Greg Abbott.

More than 6,000 migrants have been bused to the city to date and Catholic Charities of the New York Archdiocese has assisted 1,500 migrants.

Abbott said Texas “has had to take unprecedented action to keep our communities safe” due to “President (Joe) Biden’s continued refusal to acknowledge the crisis caused by his open-border policies.”

New York Mayor Eric Adams has called the transportation of migrants to New York “horrific” and accused Abbott of using migrants as a political tool. Adams announced the city will house hundreds of them in a Times Square hotel.

These migrants are seeking “safety, protection and opportunity” in the U.S., Msgr. Sullivan said.

Catholic Charities has been “steadfast in accompanying immigrants and refugees for over a century,” and serving these asylum-seekers who “suddenly and unexpectedly arrive at our doorstep” is no different, he added.

The agency’s “dedicated staff” is treating them with “respect, compassion, dignity and professionalism,” the priest said.

Catholic Charities and its partners are helping the newly arrived with food, clothing and information about city services such as shelters, as well as providing them with the assistance of immigration attorneys.

Msgr. Sullivan said the agency’s business partners, Catholic philanthropic groups and city officials have stepped up and responded generously to help. He recognized in particular city officials, who he said have “never shirked from accepting responsibility to provide shelter … even though this surge is unprecedented.”

The priest said the archdiocese and Catholic Charities “continue to look forward to working with New York City as a reception center is established to help these new New Yorkers.”

The center, expected to open Aug. 25, will be set up by the city, and Catholic Charities and other nonprofits will provide migrants information and services “to help them make it in our city,” he said.

Msgr. Sullivan acknowledged some have expressed frustration over this migrant surge, “but there is pride in being a New Yorker and stepping up to plate. And there is hope too that with a little bit of help, these individuals and families will contribute to the vibrancy of New York.”

Jennifer, an asylum-seeker from Venezuela, told reporters she was “thankful to God” for the help she has received from Catholic Charities, including legal assistance.

With Kelly Agnew-Barajas, director of refugee resettlement for Catholic Charities, interpreting for her, she repeated that she was “thankful from the bottom of my heart.”

“I have never been more proud or grateful … for how they have risen to the need,” Cardinal Dolan said of the Catholic Charities staff, noting they “are old hands at this and used to doing this with respect and efficiency.”

He added that these newly arrived families with whom he had just visited “aren’t just cases … aren’t just problems, statistics. These are people with names, dads and moms, husbands and wives, kids. We love them, we are so happy to see them. They are happy to be here.”

“They have been through turmoil for months. Now they feel at home,” he said. “We see them and love them and … the church which they love which has helped them all along the way. Alleluia.”

The cardinal added that these newcomers “just want to get settled and have a normal life and to have their children in school.”

According to the cardinal, the New York Archdiocese will make scholarships available for these children to go to Catholic schools, just as it has done for children of Haitian, Afghan and Ukrainian refugees.