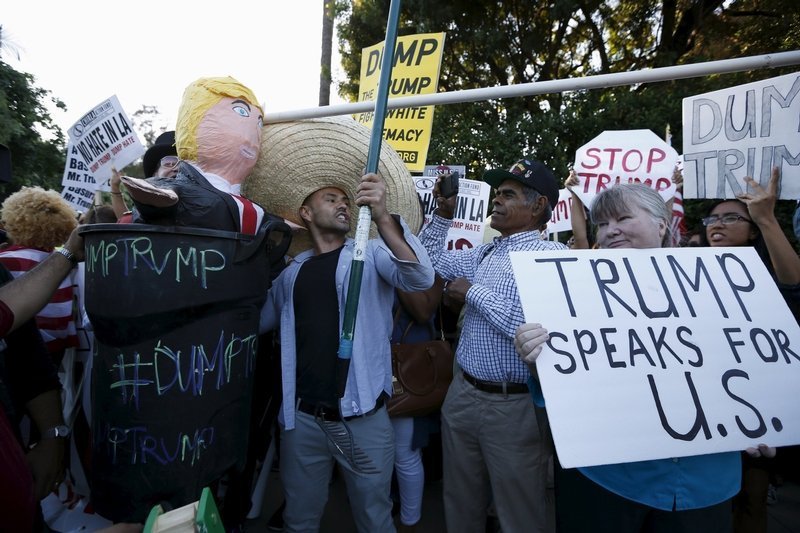 He recalled teaching college students about nativism — the policy of protecting the interests of native-born inhabitants against those of immigrants — and telling students it was "a continual virulent strain in the American psyche, which would probably sadly show up again."

The cardinal said the students back then disagreed, telling him: "Who could ever believe now that immigrants are dirty, drunken, irresponsible, dangerous threats to clean, white, Protestant, Anglo-Saxon America?"

"I wish I were in the college classroom again, so I could roll out my ‘Trump card’ to show the students that I was right. Nativism is alive, well — and apparently popular!" the cardinal wrote.

Trump struck a nerve during his presidential campaign announcement when he said "murderers" and "rapists" were among those crossing the U.S.-Mexico border.

Cardinal Dolan said American historians describe two approaches to the immigrant: The nativists "who see the unwashed, ignorant, bothersome brood as criminals and misfits who threaten ‘pure America,’ and are toxic to everything decent in the United States" and those "with the more enlightened and patriotic view" who see immigrants "as a gift to our nation, realizing that the only citizens whose ancestors were not immigrants are the Native Americans. All of us here are descendants of newcomers."

The cardinal also noted that those who support immigrants also realize the "need to control our borders, fairly regulate immigration and be prudent in our policies and laws."

Cardinal Dolan said he is "not in the business of telling people what candidates they should support or who deserves their vote. But as a Catholic, I take seriously the Bible’s teaching that we are to welcome the stranger, one of the most frequently mentioned moral imperatives in both the Old and New Testament."

He also wrote that as an American, he takes "equally seriously the great invitation and promise of Lady Liberty," noting that it’s one of the reasons why he is "so eager to share with Pope Francis the wonderful work being done by our Catholic Charities to assist immigrants who come to New York, and look to the church for assistance and a warm welcome."

"I guess, as a Catholic American, I’m a bit biased," he added.

The cardinal also pointed out that the poet Walt Whitman called New York Archbishop John Hughes a "mitered hypocrite,’ because the prelate defended his poor Irish immigrant flock — the Mexicans of his day — from the nativists."

"Thank God Walt Whitman stuck to poetry, and did not run for president," the cardinal wrote.