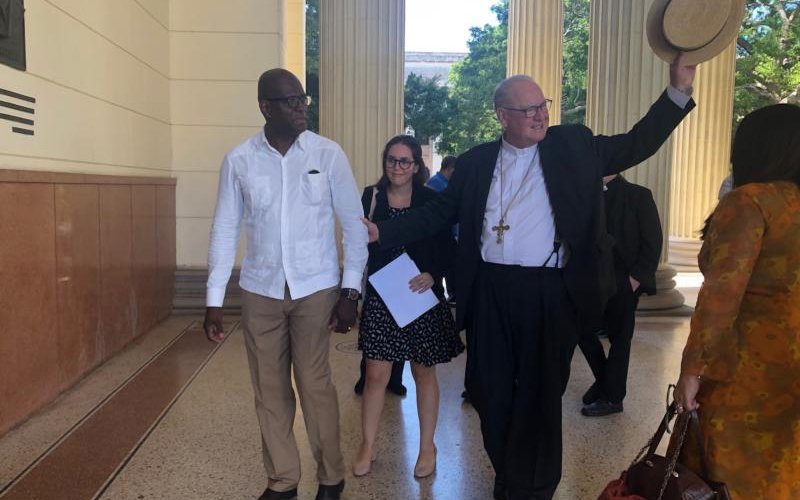 HAVANA (CNS) — New York Cardinal Timothy M. Dolan met privately with the president of the Republic of Cuba Feb. 11, the last full day of a six-day visit to the island nation mostly filled with visits to Cuban prelates and humanitarian organizations and facilities where the island’s Catholics operate services for the poor and elderly.

“The meeting went very well, and it was no surprise because he’s always extraordinarily cordial,” the archbishop of New York said in an interview with Catholic News Service following the meeting with Cuban President Miguel Diaz-Canel Bermudez in Havana. “I said I’m not here as a politician. I’m here as a pastor, Mr. President. I want you to know how much I admire my brother bishops (in Cuba).

“We’ve been very thrilled to meet priests and women religious, lay leaders and the faithful and they are happy, and they love Jesus and his church. I’m so grateful for the openness of Cuba to allow priests and sisters and lay faithful leaders into Cuba to help in the mission of the church.”

The meeting lasted 50 minutes, Cardinal Dolan said, adding that he reiterated the ardent desire of the church “to just be a partner in the public square in any project that enhances the dignity of the human person, human life, the dignity of the family, the importance of marriage, and the real deep heritage of faith found in the Cuban people.”

He said he found the president to be “realistic” but also “yearning to see if there could be good relations.”

Cardinal Dolan said he’d met Diaz-Canel twice before and the last time was in 2018, the year he took over the helm as head of Cuba from Raul Castro. Diaz-Canel visited New York later that fall and spoke before the United Nations. He asked for a meeting with Cardinal Dolan at St. Patrick’s Cathedral and during that visit, he gave the prelate a present: a statue of Our Lady of Charity of El Cobre.

Though church members, along with other religious groups on the island, suffered persecution after the triumph of the Cuban revolution, Cuba’s Catholic Church underwent a wave of openness from government officials following the 1998 visit of St. John Paul II to the island. Then Pope Benedict XVI visited in 2012, followed by Pope Francis in 2015 — all with messages of salvation.

The Vatican, with the help of Cuban Cardinal Jaime Ortega of Havana, who died in July 2019, played a major role in the rapprochement between Cuba and the U.S. and the two countries announced the reestablishment of diplomatic relations in late 2014, which included the reopening of their respective embassies in Havana and Washington.

The Catholic Church has constantly held that it’s better to engage Cuba instead of isolating it, and efforts — from the Vatican to the U.S. bishops — have emphasized diplomatic solutions.

However, with a Donald Trump presidency came sanctions and new restrictions on U.S. travel to Cuba. Cardinal Dolan said that Diaz-Canel said he was appreciative of the efforts by the Vatican and the U.S. Conference of Catholic Bishops, saying that dialogue is always better than antagonism and that mutual exchanges in commerce and culture are beneficial to the understanding of people, “and I affirmed that,” he said.

Cardinal Dolan said he agreed that those who suffer the consequences of measures such as the embargo are not the government leaders but the common people of Cuba.

“And when you see the huge shortages of food and medicine, it does strike one as unfair,” he said.

To those who would criticize his meeting with Diaz-Canel, he said he has plenty on his plate, but if he’s invited to visit a place and the visit might do some good, that’s his interest as a pastor.

“I don’t sit around wanting to make trips. I got enough to do. I’ve got a full-time day job,” he said.

He said that during the meeting, Diaz-Canel told him that Cuba was the only place in the Americas where three popes have visited.

“And I said ‘No, no. There’s one where four popes have been, namely St. Patrick’s Cathedral. Then I gave him a gift” from the cathedral, he said.

Cardinal Dolan said if others could pay visits like his to the island, including educational leaders, business leaders, artists, writers and leaders of other faith communities, “I think how things would warm up.”

The meeting made headlines in the government newspaper Granma Feb. 12, which published two stories about the cardinal’s visit saying he had been welcomed to the island with “hospitality and respect,” and mentioning his meetings with Cuban bishops and his visits to “places associated with church activities” in Cuba.

A second article mentioned the cardinal’s “visit of solidarity with the Cuban people for whom he has declared affection on more than one occasion.”