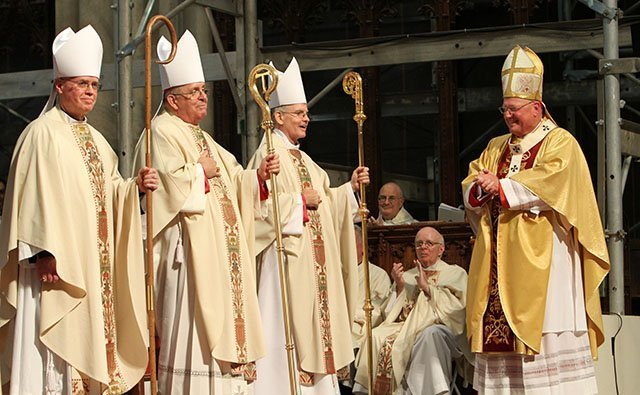 NEW YORK (CNS) — The feast of St. John Vianney, patron of priests, was a fitting day for New York Cardinal Timothy M. Dolan to ordain three new auxiliary bishops for New York, the first to be appointed since the cardinal became archbishop of New York in 2009.

The new auxiliaries were ordained at an afternoon Mass Aug. 4 at St. Patrick’s Cathedral.

Bishops John J. Jenik, John J. O’Hara and Peter J. Byrne all have at least 30 years of priestly experience and all have served long tenures as pastors.

"Lord, you never fail to provide shepherds for your people," Cardinal Dolan said in his homily.

The church can now count on "a new Peter, John and John, to encourage us, to keep our eyes locked on Jesus and walk on the water toward him," Cardinal Dolan said, "for as St. John Vianney preached, ‘A life lived in faith and holiness is nothing less than a miraculous walk on the waters.’"

Bishop O’Hara, 68, was pastor of St. Teresa of the Infant Jesus Parish on Staten Island for 12 years and parochial vicar there for eight years prior before being named archdiocesan director of strategic pastoral planning two years ago. In that capacity, he has led the archdiocese’s "Making All Things New" parish planning initiative.

Ecumenical and interreligious leaders also were in attendance.

After the ordination rite was completed, Cardinal Dolan led the three auxiliary bishops to their places in the sanctuary to thunderous applause from the congregation.

After Communion, as part of the concluding rites, the newly ordained bishops took their miters and crosiers and processed through the cathedral, blessing all present.

Among the many "Bronxites" cheering on Bishop Jenik was Irene Baldwin, 53, a member of St. Gabriel’s Parish. "This is the work of the Holy Spirit," she told Catholic New York, the archdiocesan newspaper.

Sister Margaret Mary Fitzgibbon, a Sister of Charity, who was the sixth-grade teacher of Bishop O’Hara, smiled with pride from her pew as she eyed her prized pupil in the sanctuary.

"He got the whole message" taught at Our Lady of Mount Carmel School in Ridgewood, New Jersey — "love," Sister Margaret Mary, 81, said after the ceremony.

Quoting Scripture, she added, "’God is love, and those who live in love, live in God, and God lives in them.’ That’s what he’s doing, and to be a bishop is to do it more, spreading more love."

Among the altar servers from Bishop Byrne’s parish who attended the ordination were two young men, Jean Minaya, 26 and Sandy Alberto, 22.

"He’s a great pastor, he’s a humble man," Minaya said of his pastor.

Alberto recalled learning about Bishop Byrne’s appointment from a friend’s Facebook posting. "I was so happy," he said, adding proudly, "that’s my pastor."

Tags: NY Catholics
Copyright © 2023 Catholic News Service, Inc. All rights reserved. Linking is encouraged, but republishing or redistributing, including by framing or similar means, without the publisher's prior written permission is prohibited.