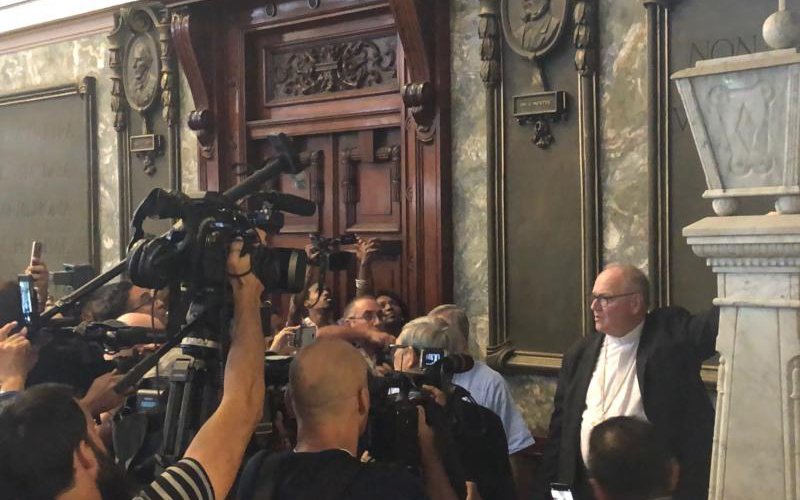 New York Cardinal Timothy M. Dolan pays his respects Feb. 11, 2020, at the place where the remains of revered Cuban-born Father Felix Varela are interred in a great room at the University of Havana in Cuba. (CNS photo by Father Stephen Ries)

HAVANA (CNS) — The moment was anything but intimate, but it was probably the best chance Cardinal Timothy M. Dolan had to pay respects to a revered Cuban-born priest who helped Irish immigrants in New York.

The archbishop of New York, followed by a crowd of press Feb. 11, approached the place where the remains of Father Felix Varela are interred in a great room on the campus of the University of Havana and began to pray. Cardinal Dolan spoke of Father Varela’s accomplishments as a scholar, teacher and thinker, one who made great contributions in his home country but also in his adoptive home.

Father Varela was born in Havana Nov. 20, 1788, but carried out his ministry in New York. He is a candidate for sainthood, and in 2012, the Vatican declared the priest “Venerable,” recognizing his heroic virtues.

Cardinal Dolan made the stop during the last full day of a Feb. 7-12 mission trip to the island nation. He was accompanied by Auxiliary Bishop Octavio Cisneros of Brooklyn, New York, who was born in Cuba and is the vice postulator of Father Varela’s canonization cause.

“He was a great thinker, but he was a man who would take the shirt off his back for others,” Bishop Cisneros told reporters.

And that’s what Bishop Cisneros wanted to emphasize, that Father Varela was a priest above all. Father Varela was ordained a priest in Havana but served in New York, including in a post as vicar general, as the church helped with an influx of Irish immigrants and refugees from other countries.

Though many Cubans on the island may associate his name with being a patriot or a scholar, he was primarily a pastor, Bishop Cisneros said. His remains were first buried in St. Augustine, Florida, where he died Feb. 18, 1853, at age 64. His remains were later returned to the island and interred on the campus.

Those who traveled with the cardinal from the Archdiocese of New York gave out prayer cards of Father Varela during Masses in Cuba where Cardinal Dolan presided.

The priest who helped the poor, the downtrodden and the immigrants in the U.S. — “that’s Father Varela” — may not be a saint canonically, he is a saint in the hearts of many, Bishop Cisneros told reporters who had gathered around Cardinal Dolan to ask about U.S.-Cuba relations.

Cardinal Dolan made the stop after a brief tour of the campus of the University of Havana, where he met with university and government officials.