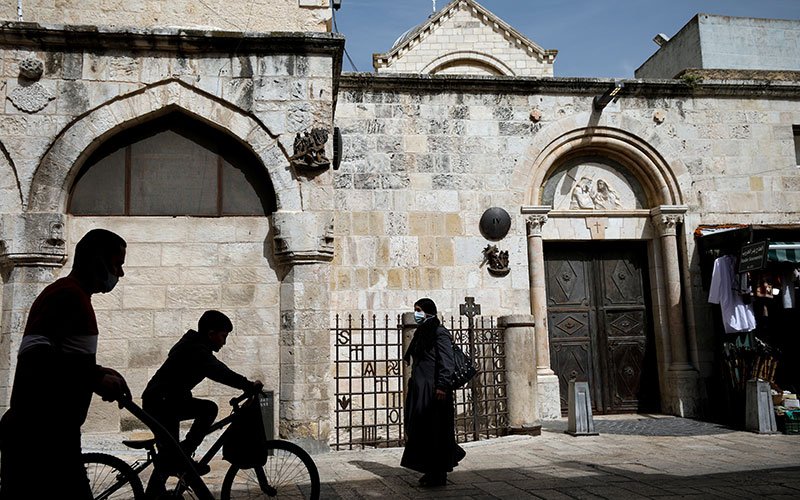 People pass two Stations of the Cross along the route of the Via Dolorosa in the Old City of Jerusalem in this March 21, 2021, file photo. A Vatican official has asked for continued support for the traditional Good Friday collection taken around the world for the Holy Land. (CNS photo by Amir Cohen/Reuters)

VATICAN CITY (CNS) — Catholics must unite helping those who, through war and persecution, experience Christ’s suffering on the cross in their own lives, said the prefect of the Congregation for Eastern Churches.

“If, in personal terms, Christ has suffered and died only once and cannot die anymore, in his body, which is the church, he continues to suffer, especially in the Middle East, but also in every other place in the world where the freedom to live the faith is trampled and prevented,” Cardinal Leonardo Sandri, congregation prefect, said in a letter released March 24.

In the letter, sent to bishops around the world, Cardinal Sandri asked for continued support for the traditional Good Friday collection for the Holy Land.

Christ’s passion and death can be seen today “from persecution in many cases, from the hostile environment at times, often from the globalization of indifference, from the violence of wars with which humanity unfortunately never seems to be satisfied, as happens in Ukraine,” the cardinal said.

The Good Friday collection, taken up at the request of the pope, is administered by the Franciscan Custody of the Holy Land — an administratively autonomous province of the Franciscan order — and the Congregation for Eastern Churches. The congregation monitors how all funds are used and how they support projects in the Holy Land, Cyprus, Syria, Lebanon, Egypt, Ethiopia, Eritrea, Turkey, Iran and Iraq.

The Franciscan Custody is responsible for most of the shrines connected with the life of Jesus as well as for providing pastoral care to the region’s Catholics, running schools, operating charitable institutions and training future priests and religious.

In his letter, Cardinal Sandri said Pope Francis’ visit to Iraq, as well as to Cyprus and Greece, brought attention to those who continue to suffer the consequences of war.

The visits, he said, also invite other Christians to ask themselves, “What do I see, what do I notice? What is the perimeter of my gaze?”

Additionally, he said, the COVID-19 pandemic has further isolated the Christians of the Holy Land, who have lived “without the warmth and solidarity of pilgrims visiting the holy places and local communities.”

“Families have suffered beyond measure, more from the lack of work than from the immediate effects of the pandemic itself,” he wrote.

Cardinal Sandri said an offering to the Good Friday collection — great or small — “allows our brothers and sisters to continue to live, to hope and to offer a living witness to the Word made flesh in places and on the streets that saw his presence.”

“If we lose our roots, how can we be, wherever we are in the world, a tree that grows and bears fruits of love, charity and sharing?” he asked.