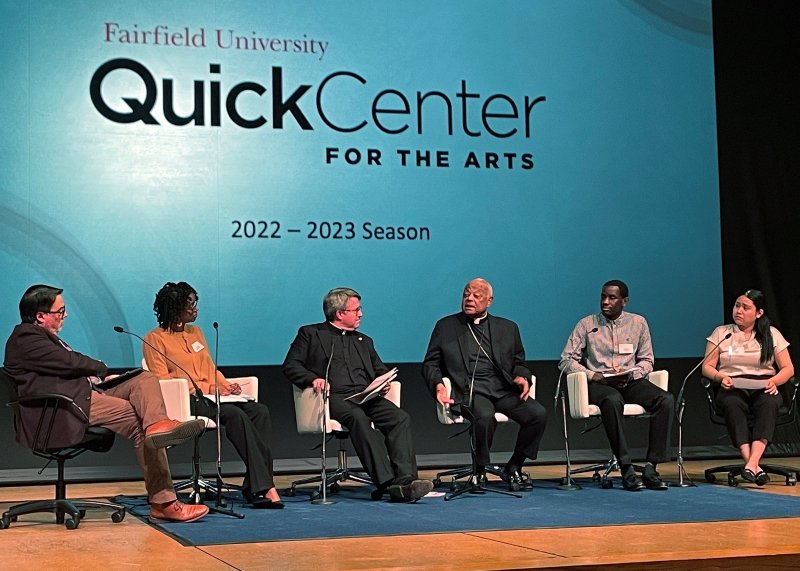 What does it look like to hold a consistent life ethic?

WASHINGTON (CNS) — Catholics, and all people of faith, must engage in the “critically important work” of fighting injustice, racism and other societal ills that prevent people from living in peace, Washington Cardinal Wilton D. Gregory said in an Oct. 13 address at Fairfield University in Connecticut.

In his lecture — as the inaugural speaker in the Jesuit-run university’s “Faith Leaders for Racial Justice” series — the cardinal pointed out that while the Catholic Church “has been at the forefront of racial reconciliation and racial justice for many years … we have not overcome all obstacles of injustice even within the church herself.”

He also said it is “fitting that we, as a church, discuss the important topic of racism within the context of our faith” and stressed that to overcome the sin of racism, parishes and ministries must be places of genuine hospitality and welcome.

The cardinal said the faithful “are called to model Christ in our society in every way we can,” and can be guided to do so by following Catholic social teaching, which he called “an incredibly valuable part of our faith.”

He lamented what he called “a unique and tense time in our history,” adding: “We are bombarded with the negative heaviness of it all as it becomes painfully clear that we are not caring for our neighbor … We see these things happening all around us and know that we cannot sit by and just let them continue.”

He also criticized what he called a “breakdown in civility and respect (that) is threatening our unity and hampering our ability to address the myriad of issues we are facing — such as institutional racism, police brutality, gun violence and respect for the dignity of every human life, especially the most vulnerable.”

“Our ability to communicate and speak honestly with one another to engage in meaningful and healthy conversation is diminishing, and it is costing us our well-being,” he said. “As people of faith and faith leaders, it is our responsibility to address … all inequalities we see — as we pray, work and always promote peace in a world full of hostility and conflict.”

Cardinal Gregory urged the faithful to familiarize themselves with Pope Francis’ encyclical letter, “Fratelli Tutti: On Fraternity and Social Friendship,” issued in 2020 as a call for the world to reject racism and war and strive toward global fraternity and solidarity.

He also suggested a careful review of the U.S. bishops’ pastoral letter, “Open Wide Our Hearts: The Enduring Call to Love,” against racism.

He stressed that racism can be defeated if believers “experience ongoing conversion to live the Gospel message and work for justice. When our brothers and sisters are treated unjustly because of their country of origin or subjected to structural racism due to the color of their skin or discriminated against because of a disability or anything else — we are called to proclaim the Gospel message,” he said.

“We are on a journey as a human family, and I have great hope that we will experience racial reconciliation in our ongoing conversion through honest and respectful dialogue,” he added. “With this and our rededicated commitment to progress, led by our devotion to prayer and active work to end racism and division, we will get there.”

Szczepanowski is managing editor of the Catholic Standard, archdiocesan newspaper of Washington.