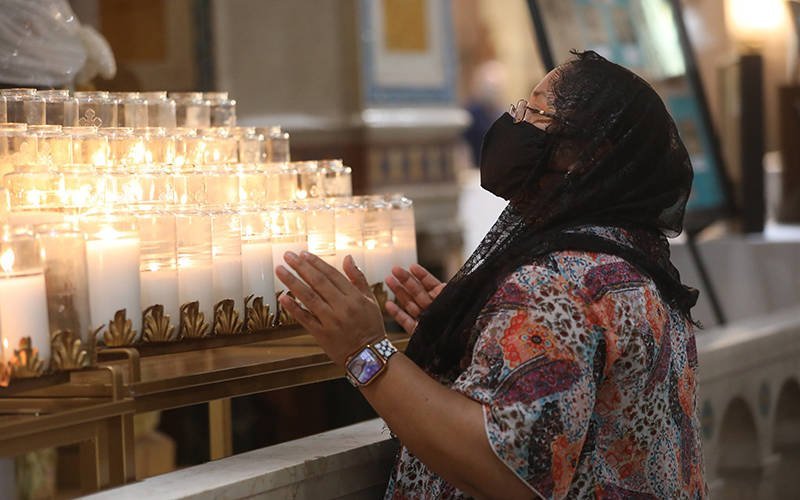 A woman in Washington prays for the people of Haiti prior to a Mass celebrated by Washington Cardinal Wilton D. Gregory at the Shrine of the Sacred Heart Parish in Washington, Aug. 27, 2021. (CNS photo by Andrew Biraj/Catholic Standard)

WASHINGTON (CNS) — Washington Cardinal Wilton D. Gregory celebrated an Aug. 27 Mass urging prayers and support for the people of Haiti in the wake of an earthquake and tropical storm that recently devastated that island nation.

The Mass was held at the Shrine of the Sacred Heart in Washington, one of three churches in the Washington Archdiocese that hosts Masses for the local Haitian Catholic community.

“The deep faith of the Haitian people has been tested repeatedly over these past several weeks,” the cardinal said. He also pointed out that “painful and frequent struggles, unfortunately, are no strangers to the people of Haiti,” but that “as in the past, your faith has been the very anchor of your survival.”

The cantors, choir and congregation said prayers and sang hymns in Creole and French. The congregation of about 300 people were of all ages and ethnic backgrounds.

In his homily, the cardinal said the purpose of the Mass was to encourage people to pray for and support the people of Haiti.

“This is also a moment when all of your brothers and sisters both here and in the Archdiocese of Washington and throughout the entire global community must recall and recommit ourselves to stand once again with our Haitian family in their moment of dire need,” he said.

In remarks after Communion, Father Luc Philogene — the chaplain of the Haitian Catholic community in the Archdiocese of Washington who is a priest from the Archdiocese of Port-au-Prince, Haiti’s capital — thanked the cardinal for his pastoral concern for the people of Haiti.

The priest, who serves about 350-400 families from Haiti now living in the Washington area, also thanked people for their prayers and support, saying that ongoing help is vital.

In an email interview before the Mass, he said: “There are no words to express the pain these people are currently experiencing.”

In the email, he told the Catholic Standard, archdiocesan newspaper of Washington, that many lost everything to the earthquake and had to sleep under the stars with practically no beds, many with broken bones, wounds, ailments of all kinds.

“Then comes tropical storm Grace, which gives no grace to these people. The strong winds of the storm coupled with the heavy rainfall gave rise to floods and mudslides. The victims who had no time to breathe from the earthquake the day before have no food, water, tents, blankets, or flashlights.”

He also said the that Catholic Church has been particularly hard hit by the recent earthquake.

“We counted many dead of all ages, including two priests, as well as hundreds of injured parishioners. Several churches, rectories, convents, parochial schools sustained significant damages. Most of the churches’ structures in these dioceses are totally lost. Also, many houses owned by the faithful incurred structural damages and would either need to be rebuilt or repaired,” he said.

Earlier in his homily, Cardinal Gregory paid special tribute to a Catholic bishop who had been a leader in promoting support for Haiti: Bishop Guy A. Sansaricq, a retired auxiliary bishop for the Diocese of Brooklyn and a native of Jérémie, Haiti, who died Aug. 21 at the age of 86, one week after the earthquake hit his native country.

He was the first Haitian bishop in the United States and was a founder and the first director of the National Center of the Haitian Apostolate headquartered in New York.

“His long and devoted service to the global Haitian community is not only a personal legacy, but also an inspiration for us all,” the cardinal said. “It is ironic that his death came in the midst of such suffering for the Haitian people, but also as a witness to the tasks of service and care that he left behind.”

Before the Mass, Washington-area Haitian Catholics reflected on the recent tragedies in their homeland and echoed the need for ongoing prayers and support.

Sophia Guerrier-Gray, a parishioner of Our Lady of Sorrows in Takoma Park, said many of her friends in Haiti have told her they are psychologically troubled after the earthquake.

“The aftershocks gave rise to panic attacks and many opted not to sleep in their houses by fear that the worst could happen,” she said. “Many have complained about how challenging life has become. Nonetheless, they say that they continue to trust God, for he is faithful.”

Zimmermann is editor of the Catholic Standard, archdiocesan newspaper of Washington.