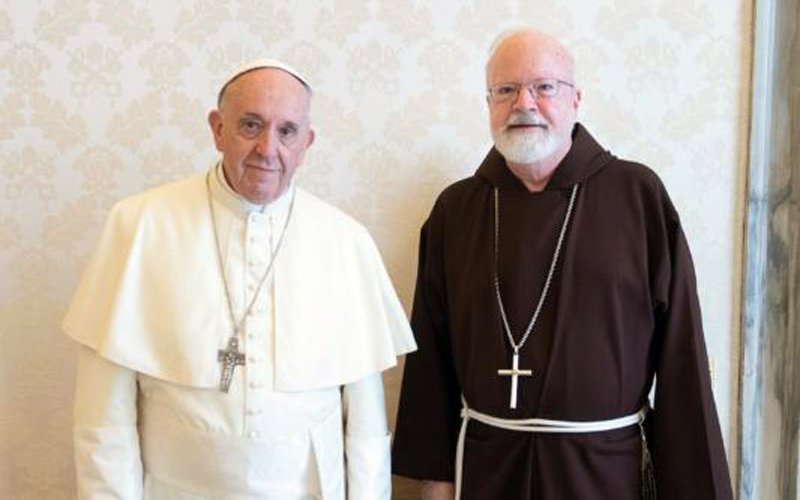 Pope Francis poses for a photo with Cardinal Sean P. O'Malley of Boston, president of the Pontifical Commission for the Protection of Minors, during a private audience at the Vatican April 19. Cardinal O'Malley Aug 10 called for an investigation of St. John Seminary in Boston. (CNS photo by Vatican Media)

WASHINGTON (CNS) — The Archbishop of Boston said in an Aug. 10 statement that he has asked the rector of its main archdiocesan St. John Seminary to go on sabbatical leave immediately and is asking for an investigation of allegations made on social media about activities there “directly contrary to the moral standards and requirements of formation for the Catholic priesthood.”

“At this time, I am not able to verify or disprove these allegations,” said Boston Cardinal Sean P. O’Malley in a statement sent to media via email. He does not say in the statement what the allegations are about.

However, a post on the community section of a Facebook page for the Archdiocese of Boston has a comment by someone named Andrew Solkshinitz‚Äé with a link to a blog post that describes seminarians at “conservative seminary” drinking heavily, “cuddling” after a drunken party, and being involved in sexual behaviors and acts. Solkshinitz says on Facebook that the seminary not identified in the blog post is St. John.

“As a former Boston seminarian for 3 years I am calling upon the church to seriously examine the seminary located on Lake street,” Solkshinitz writes in the post he made on the page. “The church has not learned her lesson and maybe if the stories are once again made public then things will finally change.”

In a statement released by the archdiocese, Cardinal O’Malley said that Father Stephen E. Salocks, professor of sacred Scripture, will serve as interim rector at St. John Seminary as Msgr. James P. Moroney, its rector, goes on sabbatical leave for the fall semester, “in order that there can be a fully independent inquiry regarding these matters,” he wrote.

Cardinal O’Malley said he also has appointed a group “to oversee an inquiry into the allegations made this week, the culture of the seminary regarding the personal standards expected and required of candidates for the priesthood, and any seminary issues of sexual harassment or other forms of intimidation or discrimination.”

He said he has asked the group to submit its findings as soon as possible.

“The allegations made this week are a source of serious concern to me as archbishop of Boston,” he wrote. “The ministry of the Catholic priesthood requires a foundation of trust with the people of the church and the wider community in which our priests serve. I am determined that all our seminaries meet that standard of trust and provide the formation necessary for priests to live a demanding vocation of service in our contemporary society. “

Cardinal O’Malley is one of Pope Francis’ chief advisers on clerical sexual abuse and heads the Pontifical Commission for the Protection of Minors.

Boston was the epicenter of the abuse scandal that erupted in the church in 2002. The Boston Archdiocese was then headed by Cardinal Bernard F. Law.

EDITOR’S NOTE: Nine seminarians for the Diocese of Rochester are enrolled at St. John’s Seminary, and Bishop of Rochester Salvatore R. Matano serves as a member of the seminary’s board of trustees. In a statement, the Rochester Diocese said it fully supports the statement of Cardinal O’Malley and the direction he has chosen regarding St. John’s.