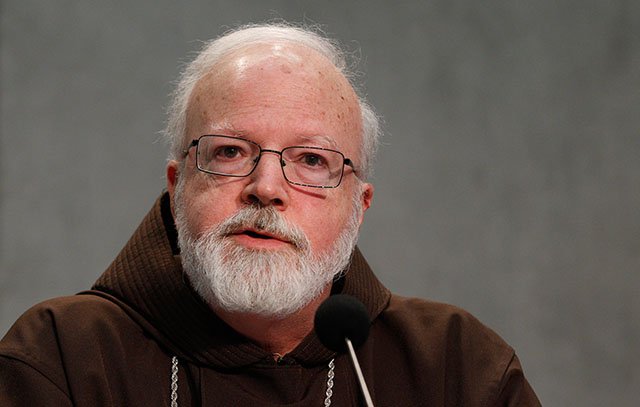 Boston Cardinal Sean P. O'Malley, a member of Pope Francis' advisory Council of Cardinals, speaks during a press conference at the Vatican Dec. 5, 2013, after being named to the Pontifical Commission for the Protection of Minors.

WASHINGTON (CNS) — In an interview with the CBS newsmagazine "60 Minutes" that aired Nov. 16, Cardinal Sean P. O’Malley of Boston said the Vatican needs to "urgently" address the situation of Bishop Robert W. Finn of Kansas City-St. Joseph, Missouri, who was convicted in 2012 on one misdemeanor count of failing to report suspected child abuse.

Bishop Finn is the highest-ranking U.S. Catholic official to face criminal charges related to the priest sex abuse scandal that erupted within the U.S. church in 2002. In the Bishop Finn case, diocesan authorities who had been told in December 2010 of child pornography found on a priest’s computer did not tell civil authorities until six months afterward.

"It’s a question that the Holy See needs to address urgently," Cardinal O’Malley said of the case, according to a transcript provided by CBS. He added, "There’s a recognition of that … from Pope Francis."

Cardinal O’Malley leads the Pontifical Commission for the Protection of Minors, established last December by Pope Francis. The cardinal’s appointment to the Archdiocese of Boston, as well as to the Dioceses of West Palm Beach, Florida, and Fall River, Massachusetts, followed the outbreak of clerical sex abuse scandals in each of those dioceses. He is one of nine members of the members of the Council of Cardinals advising Pope Francis on the reform of the Roman Curia and governance of the church.

"We’re looking at how the church could have protocols — how to respond when a bishop has not been responsible for the protection of children in his diocese," Cardinal O’Malley told Norah O’Donnell of "60 Minutes."

He agreed with O’Donnell’s assertion that under the Archdiocese of Boston’s protocols for child and youth protection, "Bishop Finn wouldn’t be able to teach Sunday school in Boston."

In late September, Archbishop Terrence Prendergast of Ottawa, Ontario, conducted an apostolic visitation to the Diocese of Kansas City-St. Joseph, Mo., to interview Bishop Finn and others in the diocese about the bishop’s leadership.

In the "60 Minutes" interview, Cardinal O’Malley also called the Vatican’s investigation into the Leadership Conference of Women Religious and efforts to reform the organization "a disaster."

An assessment by the Vatican’s Congregation for the Doctrine of the Faith called for the reform to ensure LCWR’s fidelity to Catholic teaching in areas including abortion, euthanasia, women’s ordination and homosexuality.

Asked if he thought women should be in more positions of responsibility in the Curia, Cardinal O’Malley replied, "Yes. I think there should be. And — hopefully, there will be."

He offered no timetable as to when that could happen. "I can’t tell you what time," he laughed, "but — hopefully soon, you know."