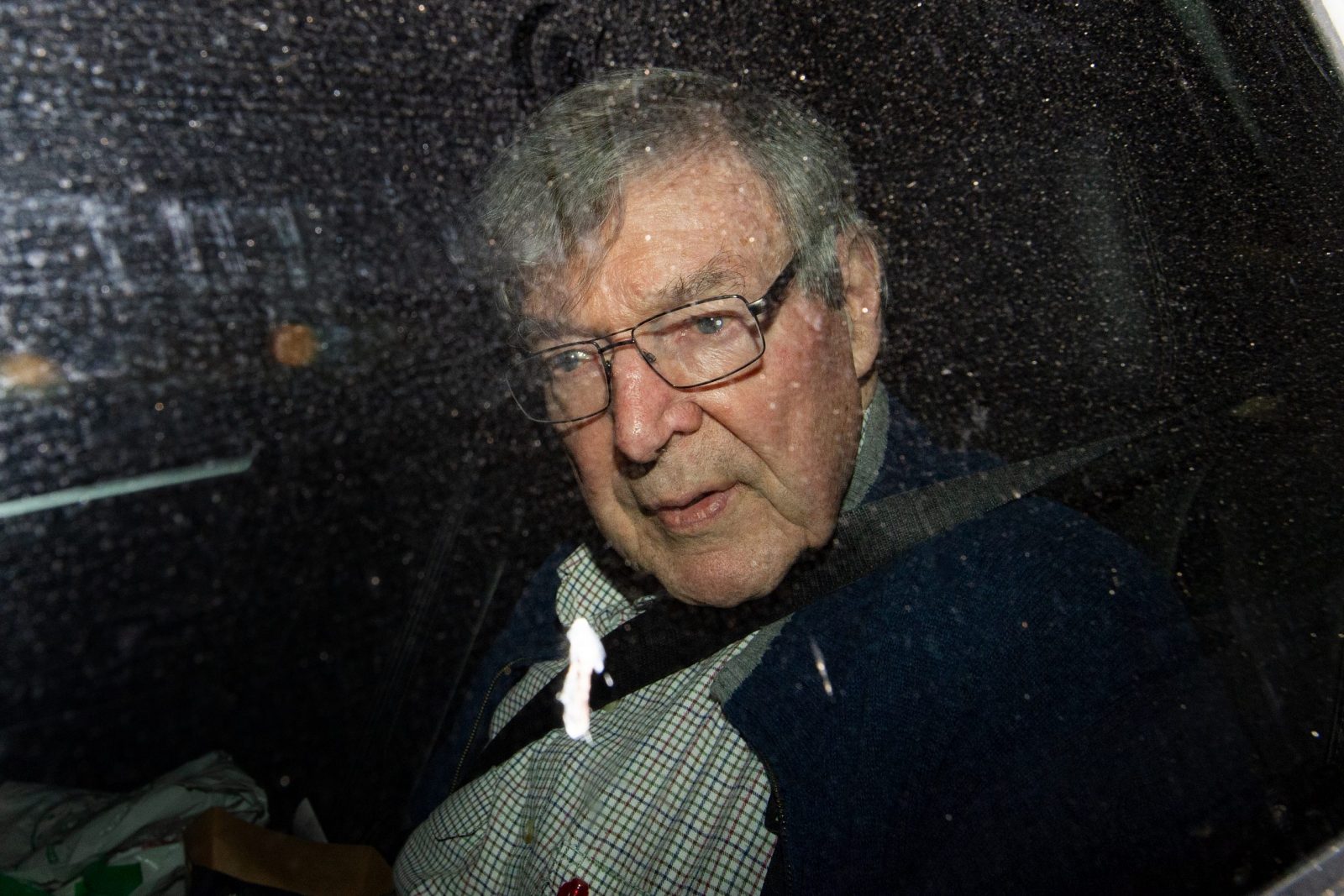 Cardinal George Pell arrives at the Seminary of the Good Shepherd in Sydney April 8, 2020. Cardinal Pell was released from prison the previous day after the High Court of Australia unanimously overturned the December 2018 jury verdict that found him guilty on five counts of molesting two 13-year-old choirboys in 1996. (CNS photo by Bianca De Marchi/AAP Image via Reuters)

VALLA BEACH, Australia (CNS) — Cardinal George Pell has been released from prison after 405 days behind bars after the seven judges of the High Court of Australia unanimously overturned the original December 2018 jury verdict that found him guilty on five counts of molesting two 13-year-old choirboys in 1996.

The court’s decision, read April 7, concluded there was “a significant possibility that an innocent person has been convicted because the evidence did not establish guilt to the requisite standard of proof.”

A few hours later, the 78-year-old Cardinal Pell was driven from Barwon prison to a Carmelite monastery in Melbourne.

“I have consistently maintained my innocence while suffering from a serious injustice,” Cardinal Pell said in a statement, adding that he holds “no ill will toward my accuser.”

The Vatican said in a statement that it “welcomes the High Court’s unanimous decision concerning Cardinal George Pell, acquitting him of the accusations of abuse of minors and overturning his sentence.”

The statement said the Holy See “has always expressed confidence in the Australian judicial authority,” and noted that “Cardinal Pell has always maintained his innocence and has waited for the truth to be ascertained.”

“At the same time,” the statement continued, “the Holy See reaffirms its commitment to preventing and pursuing all cases of abuse against minors.”

The court reversed the result of Cardinal Pell’s June 2019 appeal to the Victoria Supreme Court, which had upheld the jury verdict by a majority of 2-1. The High Court said the Victoria court should have overturned the verdict based on reasonable doubt about the cardinal having an opportunity to commit the offenses immediately after a Mass in the Melbourne cathedral.

The most senior Catholic to be convicted of child sexual offenses, Cardinal Pell originally was sentenced to six years in prison — with a possibility of parole after three years and eight months — for sexually abusing two choirboys in 1996 and 1997. One of the men has since died.

“The High Court found that the jury, acting rationally on the whole of the evidence, ought to have entertained a doubt as to the applicant’s guilt with respect to each of the offenses for which he was convicted, and ordered that the convictions be quashed and that verdicts of acquittal be entered in their place,” the brief judgment stated.

The High Court agreed with Cardinal Pell’s legal counsel who argued that the judges on the Victoria court did not take into account the testimony of witness who said that the cardinal, who was archbishop of Melbourne at the time, might not have had the opportunity to commit the offenses, thus raising reasonable doubt about his guilt, and therefore should have overturned the jury decision.

“The court held that, on the assumption that the jury had assessed the complainant’s evidence as thoroughly credible and reliable, the evidence of the opportunity witnesses nonetheless required the jury, acting rationally, to have entertained a reasonable doubt as to the applicant’s guilt in relation to the offenses involved in both alleged incidents,” the High Court said.

Australia’s final court of appeal issued its judgment less than a month after a two-day hearing by the justices on March 9-10. The decision was delivered initially by a Twitter message on the court’s official feed linking to the decision, due to the unique circumstance of the COVID-19 pandemic that has infected more than 5,000 Australians and claimed more than 40 lives.

Due to social distancing measures in Australia to stem the spread of the coronavirus and the closure of some state borders in the country, the verdict was delivered by Chief Justice Susan Kiefel in a near empty room in the High Court registry in her home state of Queensland, rather than at the High Court in Australia’s capital Canberra.

Cardinal Pell said in his statement that “my trial was not a referendum on the Catholic Church, nor a referendum on how church authorities in Australia dealt with the crime of pedophilia in the church. The point was whether I had committed these awful crimes, and I did not.”

Many survivor’s groups, who had seen the cardinal’s conviction as vindication for their long-standing campaigns to get justice from the church for decades of child sexual abuse, were devastated by the acquittal.

Archbishop Mark Coleridge, president of the Australian Catholic Bishop’s Conference, said in a statement that the High Court’s ruling will be “welcomed by many, including those who have believed in the cardinal’s innocence throughout this lengthy process.”

“We also recognize that the High Court’s decision will be devastating for others,” he said. “Many have suffered greatly through the process, which has now reached its conclusion. The result today does not change the church’s unwavering commitment to child safety and to a just and compassionate response to survivors and victims of child sexual abuse. Any person with allegations of sexual abuse by church personnel should go to the police.”

Cardinal Pell’s legal problems might not be over. Prosecutors could potentially revive another set of potential charges for a second set of historical abuse allegations that were headed for trial but dropped once he was originally convicted.

He is also facing a string of civil suits — Australian news media have reported as many as 10 suits either filed or in preparation — and new allegations were made in recent weeks as part of a three-part documentary series on child abuse in the Australian church.

In addition, Australian Attorney General Christian Porter is now free to authorize the removal of lengthy redactions to two case studies from the country’s Royal Commission into Institutional Responses to Child Sexual Abuse.

One case study concerned a timeframe when the cardinal was a priest in the Diocese of Ballarat and was supposedly advising the bishop at a time when serial child sexual abuse by other priests occurred, as documented by the Royal Commission. The other covered a time frame when he was archbishop of Melbourne when other such offenses were committed by priests in the diocese.

Survivors groups are pressing Porter to release the information.

The Vatican had said Cardinal Pell faced an abuse investigation by the Congregation for the Doctrine of Faith, but that investigation was put on hold awaiting the conclusion of the Australian legal process.

The Vatican statement April 7 did not say whether or not the church investigation would continue.