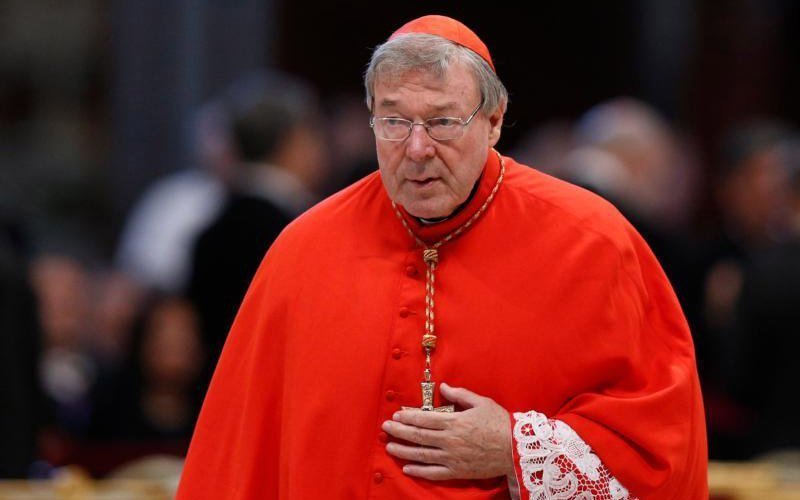 In this 2015 file photo, Australian Cardinal George Pell, prefect of the Vatican Secretariat for the Economy, is seen at the Vatican. (CNS photo by Paul Haring)

SYDNEY (CNS) — A man Cardinal George Pell was convicted of sexually assaulting said he is finding it hard to “take comfort” in the cardinal’s six-year jail sentence because a request to appeal the conviction is due to be heard June 5.

The father of the other victim, now deceased, expressed his disappointment with the sentence, which could see the cardinal freed on parole after three years and eight months.

Judge Peter Kidd, who imposed the sentence March 13, said was it shorter than usual due to Cardinal Pell’s age, 77, and ill health.

The cardinal was convicted of abusing two 13-year old choirboys in late 1996 and early 1997 in the sacristy of Melbourne’s St. Patrick’s Cathedral.

The surviving victim, referred to as “victim J” in the judge’s sentence, said in a statement read by his lawyer, “I respect what the judge said. It was meticulous, and it was considered.”

But, he said, “it is hard for me, for the time being, to take comfort in this outcome.”

“I appreciate that the court has acknowledged what was inflicted upon me as a child. However, there is no rest for me. Everything is overshadowed by the forthcoming appeal,” the statement said.

The victim, who has never been named, also rebutted criticism of the guilty verdict, saying he had spent more than two days giving evidence and was cross-examined by Cardinal Pell’s defense lawyer — vigorously, sources told Catholic News Service — while the cardinal did not take the stand at all.

“A jury has unanimously accepted the truth of my evidence; Pell chose not to give evidence; the jury did not hear from him,” his statement said.

The father of the deceased victim, who is suing Pell, described the sentence as a “joke” in a statement issued by his lawyers.

“Today we witnessed history with one of the world’s most senior Catholic figures jailed for child sexual offenses,” said Lisa Flynn, representing the father’s law firm. “Our client is disappointed with the short sentencing and has expressed sadness over what he believes is inadequate for the crime.”

Victims of abuse have been “waiting to feel heard,” she said. “Pell’s sentencing moves that progress forward, even if only a few small steps. I admire the courage of my client to keep fighting on behalf of his deceased son. To him, this battle is not over,” Flynn added.

“The criminal justice system has only partially satisfied our client’s pursuit for justice today,” she said. “It’s now on us as his civil litigators to keep pushing for more just outcomes.”

Flynn said her client is suing the cardinal “knowing that civil action has the power to disrupt an institution and impact meaningful change to prevent more tragedies from occurring.”

Cardinal Pell was present for the sentencing; he wore and open-necked black shirt with a beige blazer, but no clerical collar.

The assembled victims, supporters, legal teams and media respected the judge’s call for silence throughout the proceeding; he spent more than an hour explaining the reasoning behind his sentencing.

The cardinal displayed no emotion and avoided eye contact during proceedings, before using a handrail to help him stand to hear the final sentence, reporters in the courtroom noted. After sentencing, the cardinal was ordered to sign the Victoria state sex offenders’ register before he was taken away in a prison van.

Victims’ rights advocates outside the court cheered the verdict but said only a small piece of justice had been done and thousands more victims were waiting for justice.

The Australian Catholic Bishops’ Conference and the Melbourne Archdiocese declined to comment on the sentence.

“I would just ask Australians today to get around those who have been victims of child sexual abuse,” Australian Prime Minister Scott Morrison told reporters in Melbourne only minutes before the verdict.

“Let them know we know it happened, that we want to help you be stronger and to survive what is the most abominable you could think that could happen to an individual with a breach of trust,” he said.

Bill Shorten, leader of the opposition Labor Party who will face Morrison in an election in May, said, “We can never underestimate the courage and resilience it takes for a survivor of child abuse to seek justice.”

Noting that the Royal Commission into Institutional Responses to Child Sexual Abuse found that survivors were rarely believed, Shorten said, “instead, against the weight and power of both church and the state, they were marginalized, shamed and re-abused.”