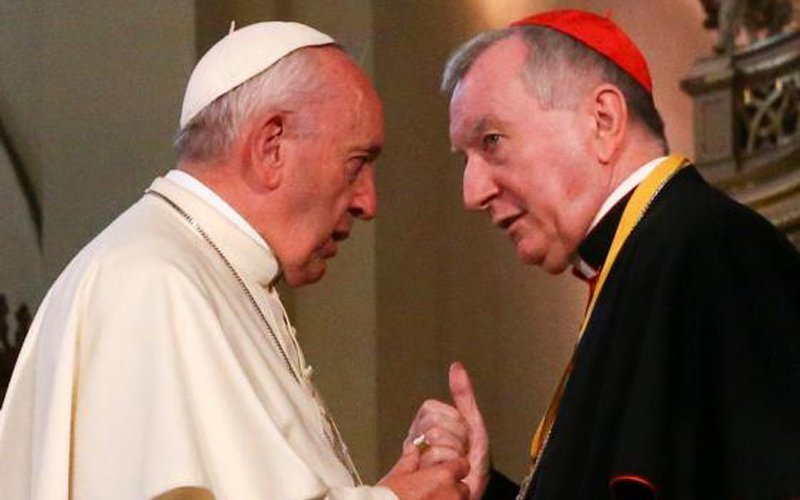 In an interview posted Aug. 30 by “Vatican Insider,” the online news supplement to the Italian newspaper La Stampa, Cardinal Pietro Parolin said that in situations like the current crisis “that obviously creates so much bitterness and worry,” the pope “has the ability to take a very serene approach.”

“From what I saw — I haven’t seen him today, but I have seen him in these days; I was with him during the trip to Ireland and after — he seems serene,” Cardinal Parolin said.

In an 11-page statement, published Aug. 26, Archbishop Vigano, who served as nuncio to the United States from 2011 to 2016, accused church officials, including Pope Francis, of failing to act on accusations of abuse of conscience and power by now-Archbishop Theodore E. McCarrick. Archbishop Vigano claimed he told Pope Francis about Cardinal McCarrick in 2013.

Citing the rights of the faithful to “know who knew and who covered up (Archbishop McCarrick’s) grave misdeeds,” Archbishop Vigano also named nearly a dozen former and current Vatican officials — including Cardinal Parolin — who he claimed were aware of the accusations.

Speaking to reporters traveling back to Rome with him from Dublin Aug. 26, Pope Francis called on them to read Archbishop Vigano’s statement carefully “and make your own judgment.”

“I think the statement speaks for itself, and you have a sufficient journalistic ability to make a conclusion,” the pope said.

Cardinal Parolin said that “one can only express pain, great pain” in a situation in which a bishop makes serious accusations against the pope.

“I hope that we can all work in the search for truth and justice, that those may be the points of reference and nothing more,” the cardinal said.

However, when asked his opinion of the veracity of Archbishop Vigano’s accusations, Cardinal Parolin said he deferred to Pope Francis’ response.

“It is better not to enter into details on those things,” Cardinal Parolin said. “I repeat what the pope said: You must read and make your own judgments; what was written speaks for itself.”