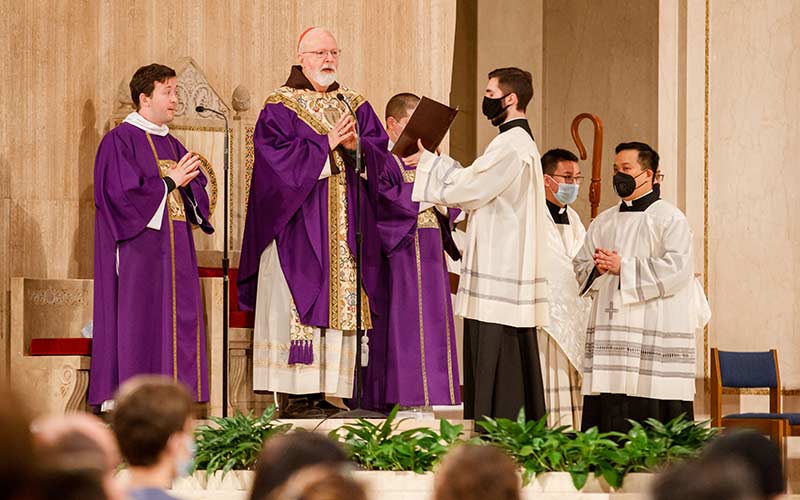 Boston Cardinal Seán P. O'Malley, president of the Pontifical Commission for the Protection of Minors, celebrates the closing Mass of the National Prayer Vigil for Life Jan. 21, 2020, at the Basilica of the National Shrine of the Immaculate Conception in Washington. (CNS photo by Gregory L. Tracy/The Pilot)

Catholics urged to pray, work for day when every life is protected in law

WASHINGTON (CNS) — Likening the pro-life cause to the Rev. Martin Luther King Jr.’s “I Have a Dream” speech at the March on Washington in 1963, Cardinal Seán P. O’Malley of Boston said dreams can take a long time to come true.

“We’re all painfully aware that dreams are seldom realized overnight. They point us in a direction and they encourage us to make the journey,” Cardinal O’Malley said in his homily at an early Jan. 21 Mass that ended the annual National Prayer Vigil for Life in Washington.

Such was the case for St. Joseph, he explained. Joseph was visited in a dream by an angel, who told him that King Herod — who wanted the Christ Child dead — was now dead himself. “Take the child and his mother back to the land of Israel,” the angel said. The Holy Family had fled to Egypt to escape Herod’s murderous rage.

“Joseph’s whole life is completely upended but he completely and generously obeys God’s will,” said Cardinal O’Malley during the Mass at the Basilica of the National Shrine of the Immaculate Conception.

In much the same way “half a century ago,” he recalled, that happened to him — when he was a Capuchin Franciscan priest ministering at the Spanish Catholic Center in Washington and known as “Father Seán” — and happened to March for Life founder Nellie Gray.

“We had a dream that we wouldn’t have to go back on a cold day in January every year,” he said, and that Roe v. Wade, the 1973 Supreme Court decision that legalized abortion nationwide “would one day be relegated to the dustbin of history.”

Gray “renounced her career as a lawyer in the Labor Department to dedicate her life” to this cause, the cardinal said.

“Perhaps this will be the year of Herod’s death, when legal protection for unborn children will be enshrined in our laws,” he noted.

A case currently before the U.S. Supreme Court involving a Mississippi law banning most abortions after 15 weeks is seen by many as a direct challenge to Roe.

Court watchers speculate the justices could decide to overturn Roe or at the very least severely curtail it with their decision in in Dobbs v. Jackson Women’s Health Care. The ruling is expected in June or early July.

Even if abortion’s legality becomes once again an issue for state lawmakers to consider, much work remains, Cardinal O’Malley said in his homily.

“The pandemic has unmasked terrible inequalities that exist in our society and in our world,” among them less access to health care, education, housing, and “even justice in our courts,” he noted.

“Minorities account for two-third of abortions each year” as “whatever meager assistance comes (is) far too late,” Cardinal O’Malley said. “We are failing them and their children in their time of need. We can and must do better.”

“Dismantling unjust laws is only the beginning. We still have the arduous task of creating a pro-life culture, of changing heart and minds,” he said, but if pro-lifers “come across as judgmental and self-righteous we’re never going to get a hearing in America.”

Rather, Cardinal O’Malley said, “our task is not to judge others, but to try to bring healing. … Our job is to build a society that takes care of everybody, where every person counts, where every life is important.” Otherwise, he warned, “poverty, racism and economic injustice will continue to fuel abortion in post-Roe v. Wade world.”

The antidote to abortion, he said, “ultimately, will be solidarity and community” to counter “so much isolation and alienation and individualism.”

Women in difficult pregnancies are “often overwhelmed and compelled to end the life of the child,” Cardinal O’Malley said. “Our role as a church is to build a strong sense of community where people feel responsible for each other. The statistics are grim — 1 million abortions a year. Most of those abortions are performed on unmarried women in poverty.”

The cardinal recalled the Marshall Plan, in which the United States helped rebuild a Europe ravaged by the devastation wrought by World War II. “What are we doing for the disenfranchised of our own country?” he asked. “A land where the rich grow richer and the poor grow poorer will always be fertile soil for abortion.”

Cardinal O’Malley called it ironic that “2 million Americans each year try to adopt children, and only 20,000 U.S. babies are given up (for adoption). At the same time, a million babies are being aborted. It’s tragic.”

He said, “Only a huge educational effort will be able to change the cultural prejudices that exist. Adoption needs to be more user-friendly, it needs to be more transparent and it needs to be celebrated,” adding that adoptive parents can find a role model in St. Joseph, the foster father of Jesus.

“Changing the laws is important, but building a civilization of love is what