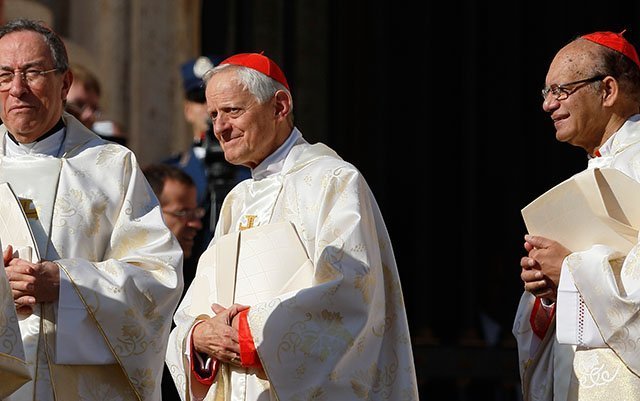 Cardinal Donald W. Wuerl of Washington, center, arrives in procession for the beatification Mass of Blessed Paul VI in St. Peter's Square, Oct. 19. Cardinal Wuerl said the next Synod of Bishops on the family would focus more on traditional families.

VATICAN CITY (CNS) — Cardinal Donald W. Wuerl of Washington said the Oct. 5-19 Synod of Bishops on the family came to a "real consensus" after two weeks of animated debate, and that its final report will serve as a solid basis for the world synod on the family in 2015.

"What we saw and what we ended up with was the result of a free and open process. The pope at the very beginning said speak with clarity and charity and listen with humility and that’s what happened," Cardinal Wuerl told Catholic News Service Oct. 20.

The cardinal said the only "glitch" in the process came with the synod’s Oct. 13 midterm report, which made headlines with its strikingly conciliatory language toward people with ways of life contrary to Catholic teaching, including divorced and remarried Catholics, cohabitating couples and people in same-sex unions.

The midterm report was "seen by many as not being as balanced as it should have been. At least from their perspective, it wasn’t as reflective of the balance in the discussions," the cardinal said.

As a result, he said, "it was really important that that final (report) be a consensus document."

Cardinal Wuerl, who served on the 11-member team that drafted the final report, said "there were a number of things that you see in this final document that were only lightly touched upon (in the midterm report), and then there were things you see in that (midterm report) that aren’t in here at all."

He said the synod’s working groups commonly objected to the theological concept of "graduality," which the midterm report used, among other ways, to suggest the positive value of "irregular" relationships such as cohabitation.

"You don’t see that in the final document because the small language groups said, ‘Yes, it was said, but it didn’t garner support,’" the cardinal said.

Synod fathers voted on each of the final report’s 62 paragraphs. All received a simple majority, but three — on especially controversial questions of homosexuality and Communion for the divorced and civilly remarried — failed to gain the two-thirds supermajority required for approval of synodal documents.

The final report was a "consensus document, to the best of the ability of everybody working on it," Cardinal Wuerl said. "And you know what verifies that for me? Every single one of those paragraphs received a majority and only a handful didn’t receive the two-thirds."

The final report will serve as the working paper for the October 2015 world synod on the "vocation and mission of the family in the church and the modern world."

"Between now and next October, I think there is going to be so much fruitful discussion in the church," Cardinal Wuerl said.

Following the often-contentious discussion of sexual ethics and how to reach out to people in "irregular" unions during the synod, preparation for the next assembly, the cardinal explained, would give more attention to the challenges and virtues of traditional families.

"We’ve had such an airing, such as expression of the problematic," Cardinal Wuerl said. "I think we are going to be hearing more and more the positive side … the wonder of what the church has experienced and presented from the beginning."