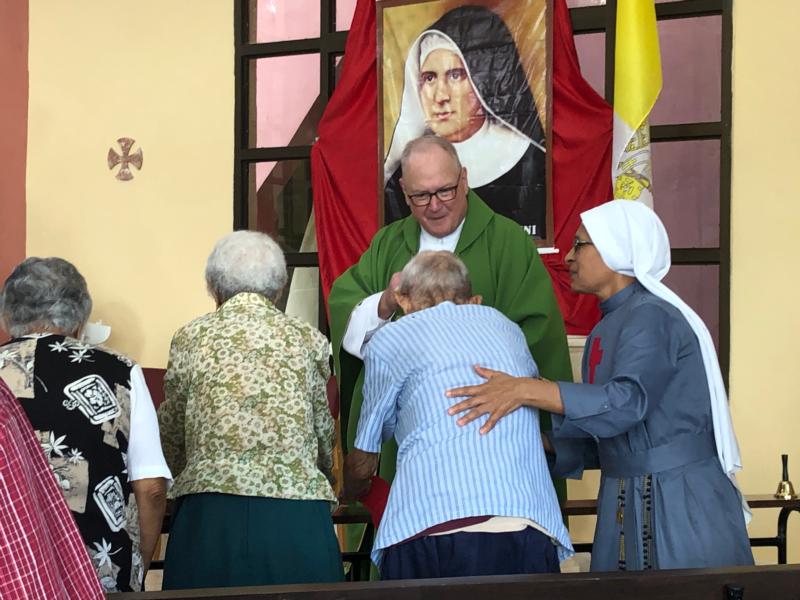 New York Cardinal Timothy M. Dolan gives Communion to residents of a home for the elderly in Camaguey, Cuba, where he celebrated Mass Feb. 9, 2020. (CNS photo by Rhina Guidos)

CAMAGUEY, Cuba (CNS) — Cuban Archbishop Wilfredo Pino Estevez gently motioned U.S. Cardinal Timothy M. Dolan toward the man quietly sitting in the chair who had recently lost part of his leg due to complications from diabetes.

With a gentle smile, the archbishop of New York approached the man and softly traced the sign of the cross on his forehead, stopping to briefly chat with him, then touching his shoulder in comfort during a Feb. 9 visit to a facility in Camaguey, where a small group of women religious, along with a small staff, care for the sick and elderly.

While governments may disagree with one another over ideologies, that doesn’t mean religious organizations can’t be a source for good works that need to be carried out in a society, said the cardinal, following a visit to the center named after Cuban Archbishop Adolfo Casildo Rodriguez Herrera, and popularly referred to as the Monsenor Adolfo Rodriguez center, because he envisioned the facility but didn’t live to see it come to fruition.

Cardinal Dolan, in the midst of a six-day mission visit, his first to the island, thanked the three religious sisters of the order of St. Camillus of Lellis “for your example” after celebrating Sunday Mass with them and a group of more than two dozen residents of the facility.

At the same hour they regularly celebrate Sunday Mass at the center each weekend, he celebrates Mass at St. Patrick’s Cathedral in New York City, he told them, expressing joy about being with them in Camaguey instead of on Fifth Avenue. He said he was paying the visit as their neighbor but also as a brother in Christ.

Living on an island, sometimes it’s easy to feel isolated, said Archbishop Pino of Camaguey, in an interview with Catholic News Service, but visits from outside, such as Cardinal Dolan’s, remind Catholics in Cuba of that universal church they belong to, he said.

“Just that simple detail, of realizing that at the same time we celebrate a humble Mass here with 10 or 15 people, that at that same hour in New York and in other parts of the world, we’re sharing the same things. It’s very exciting,” Archbishop Pino said. “Sometimes we’re not always aware of those things, of the great things that God carries out through us.”

That connection with Catholics from outside, particularly with those who have roots in Camaguey, in fact, is what made the center for the elderly a reality, Archbishop Pino said. The U.S. has a great “Camagueyan” colony of Catholics living in the U.S. who contributed to the building of the center, which took 13 years to build, and provides essential services in the rural area.

With help from the Cuban diaspora, the center will acquire an ambulance set to arrive any day, Archbishop Pino told the cardinal.

Some of the residents showed the cardinal plaques bearing the names of Camagueyans living abroad, who had donated the money to finance their room or who had contributed to name a room after a loved one.

“They showed a quiet dignity,” the cardinal said of the interaction he had with the 40 or so residents, many whom he personally greeted during or after Mass and who proudly showed him their living quarters.

Such services provided by the sisters and staff become important as the island ages, said Archbishop Pino.

“Sadly, the Cuban population is old and there isn’t a great population boom,” he said. “Some people are afraid to have children in the midst of difficulty. That is something Pope John Paul II warned us about during his visit. Simply put, there is a low birth rate.”

The teachings of the Gospel, to care for others, then become more important, Archbishop Pino said, adding that even though Scripture warns against telling others about one’s good works, “for one day, I would like to disobey God,” and tell others what great things the church does, from feeding the poor, visiting or caring for the elderly, as is the case at the Monsenor Adolfo Rodriguez center, he said.

“There are so many great works of charity that the church carries out here,” he said.