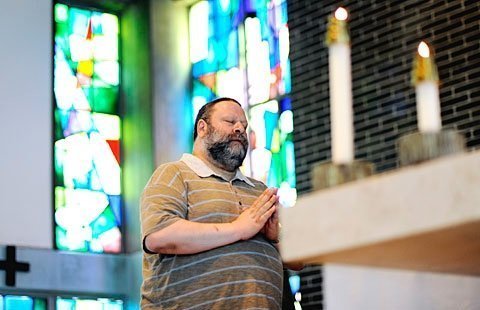 Joe Del Plato, who receives outpatient services at the Rochester Psychiatric Center, prays during a May 22 Mass at the center.

ROCHESTER — A middle-aged man entered St. Jude Chapel at Rochester Psychiatric Center, wearing a large cross around his neck, looking skyward and making numerous signs of the cross before proceeding to the front row.

He was among approximately 20 people — mostly patients of the facility — who gathered for the 10 a.m. Sunday Mass on May 22. Some folks sauntered in late; others left within minutes of arriving. A few spoke loudly when silence was to be observed. Most remained seated when invited to stand.

Disregard for protocol notwithstanding, people with mental illness are just as deserving of spiritual nourishment as anybody else, said Deacon Brian McNulty, the psychiatric center’s chaplain.

"Very definitely, they have a relationship with God. You always try to be sensitive to that relationship," he said.

One worshiper, Joe Del Plato, told the Catholic Courier that he rates his bond with God "very good."

"The greater my faith, the greater my hope," said Del Plato, 55, who was altar server that day for Father Otto Vogt, a retired diocesan priest and frequent celebrant of the center’s semiregular Sunday liturgy.

Del Plato was diagnosed with severe depression just before turning 50 — "I came to work one day and hit a brick wall, couldn’t do anything" — and spent most of the next five years as a Rochester Psychiatric Center resident before being discharged in February 2011. "God has been moving me and pushing me, this way and that way, to get to where I am now. My faith is stronger," he said.

Jean Ange served as a lector at the May 22 Mass. She had recently ended a two-month stay at the center due to schizoaffective and general anxiety disorders that have plagued her since high school. Ange, 43, said she often stays inside when she’s struggling. But she makes a point of attending church regularly "even when I’m not feeling well; it makes me stronger."

Del Plato and Ange currently are outpatients at the psychiatric center, which Deacon McNulty said houses 200 to 250 patients at any given time. However, he emphasized that this total "doesn’t begin to track the pervasiveness of mental illness in the community," pointing out that even though most mental illnesses don’t require institutionalization, they can still be starkly debilitating.

One in every four people develops one or more mental disorders at some stage of life, according to the World Health Organization. Despite its effects on a considerable portion of the population, Deacon Tom Lambert feels that mental illness remains a taboo topic. That, in turn, hampers governmental support and community acceptance of the mentally ill, he said.

"Well, it blows my mind, I’ll tell you. It’s the last thing in the closet, and there’s not much left in the closet. It’s just one of those things that people don’t like to talk about. We need to give people permission to talk about it," said Deacon Lambert, who established the Commission on Mental Illness in the Archdiocese of Chicago and cochairs the National Catholic Partnership on Disability’s Council on Mental Illness.

Raising this important issue among parishioners is exactly what the Diocese of Rochester’s Public Policy Committee will do frequently in the upcoming year: The committee recently announced that outreach to the mentally ill will be its advocacy issue for 2011-12. Brigit Hurley, a committee member who proposed the theme, said she’d like to erase perceptions that mental illness is "a character flaw rather than an illness" and only exists among a limited, isolated population.

"They’re here, they’re in our parish communities and families. You can’t ignore it," said Hurley, who serves as parish social-ministry coordinator at Rochester’s Catholic Family Center.

An illness, not a choice

Deacon McNulty described mentally ill people as "disconnected," saying that they feel anxiety, dread, fear and pain just like anybody else but have a harder time controlling those feelings. This disruption of mood and thought prevents the mentally ill from functioning socially and/or carrying out typical daily activities.

"What they feel is the same thing I go through. How it might get experienced is different. That’s my point of contact with them — we’re the same," said Deacon McNulty, a retired teacher of children and adolescents at Rochester Psychiatric Center.

Deacon Lambert noted that for most mentally ill people "there’s a biological base" to such conditions as severe depression, bipolar disorder, obsessive-compulsive disorder, paranoia, anxiety and panic disorder, schizophrenia, posttraumatic stress disorder and eating disorders. Del Plato, for one, said he’s come to accept that his depression is not something he chose but a genuine illness — "just like catching a cold, getting diabetes or high blood pressure."

Services for the mentally ill have improved greatly in recent decades thanks to medical advances and the expansion of group homes, day-care facilities, and mental-health community centers and associations. As a result, Deacon McNulty said the psychiatric center has gone from housing a peak total of 6,000 patients in the 1950s to fewer than 250 today.

"They’re in society being cared for," he said.

However, he and Deacon Lambert contend that far too many people with mental illness are still getting inadequate treatment, if any at all. Deacon Lambert said this often becomes "the root cause" for addictions, homelessness, suicide, violence and incarceration. If more tax dollars were earmarked for psychiatric care, costs to the public would be offset by fewer people landing in prison, he argued.

"If you get people into treatments and on their medication, they’re not going to be committing crimes," he explained.

The diocesan Public Policy Committee, meanwhile, is beseeching New York state legislators to create incentives that would swell the ranks of service providers –– particularly for young people. As it stands, Hurley said, only 20 percent of children and adolescents in the United States with a psychiatric disorder receive treatment.

Although mental illnesses affect 25 percent of the general population, those illnesses often remain hidden. Deacon McNulty said a street person who talks loudly to himself may be easily noticeable, but "what you don’t see are the thousands of people petrified, scared to leave their apartment."

Mental illnesses also may remain hidden even when those affected are among us. "The majority are holding jobs, doing very well in society, but they’re not about to tell us," Deacon Lambert said. He contended that much of the silence stems from fear of ridicule or being told — even by family members — that their illnesses can easily be controlled.

"People say, ‘Why don’t you just get out of bed and get a job?’" he remarked.

Deacon Lambert said such an attitude illustrates how the topic of mental illness is minimized or avoided. Another example involves his own daughter, now 42, who suffers from personality disorder, depression and schizophrenia. Whereas a stream of well-wishers visited his home for weeks after his wife’s open-heart surgery, he recalled, the experience was much different after his daughter had a stay in a psychiatric hospital: "No one came over, nobody rang the bell."

Ange said her high-school friends supported her upon learning of her mental illness, but in subsequent years she lost out on job opportunities because of it. And in the places she was employed, "other workers shunned me. They didn’t understand (my illness)."

Deacon Lambert acknowledged that one reason for this avoidance is the societal tendency to create distance from anybody who acts unusually. He said this reaction has some merit in the name of personal safety, but it’s not a valid excuse for mistrusting and ignoring all people with mental illnesses: "At some point you have to understand the difference between the symptom of an illness and a real danger." He said attitudes must be adjusted so that people who are mentally ill can feel more comfortable about coming forward. He applauded the recent public disclosures by Oscar-winning actress Catherine Zeta-Jones and teen star Demi Lovato that they’re being treated for bipolar disorder.

"That’s exactly what we should be able to say — ‘I need some help, I’m recognizing the symptoms and am going to get some help,’" Deacon Lambert said.

How can Catholics help in giving the mentally ill greater dignity, respect and confidence? Perhaps a cue can be taken from Father Joe Marcoux.

In an early-June bulletin column, Father Marcoux — who serves as pastor of St. Catherine of Siena in Ithaca — described being admonished by a parishioner after he said during a homily that a particular day had been "manic" and "bipolar." With newfound sensitivity toward mental illness, Father Marcoux has pledged to begin a mental-health support group at the parish in honor of St. Dympha, the patroness of those afflicted with mental and nervous disorders.

Such actions exemplify what Blessed John Paul II envisioned in a 1996 address on the mentally ill. The late pope said that since these people are made in God’s image and likeness, they’re worthy of the same care and compassion as any other human.

"It is everyone’s duty to make an active response: our actions must show that mental illness does not create insurmountable distances, nor prevent relations of true Christian charity with those who are its victims," the pope told an international health-care conference. "Indeed, it should inspire a particularly attentive attitude towards these people who are fully entitled to belong to the category of the poor to whom the kingdom of heaven belongs."

Deacon McNulty said parishes can play a crucial role in recovery because mental health patients benefit much more from a community setting than from being isolated. Armed with their faith, they can make necessary steps forward.

Del Plato, for instance, has begun returning on weekends to Batavia, where he’s been welcomed openly at Ascension Parish. He also enjoys his regular Saturday-morning breakfast outings with friends in town.

"Sometimes I just want to sit and talk with someone," he said. "It’s good to get back."

As she looks ahead, Ange said she’d like to once again have a job, return to school and get an apartment. She said her faith helps remind her "that God loves me, that I know he wants me to have a purpose in this world. I think I’m meant to be a daughter and sister — to be there (for family) and live my life to the fullest."