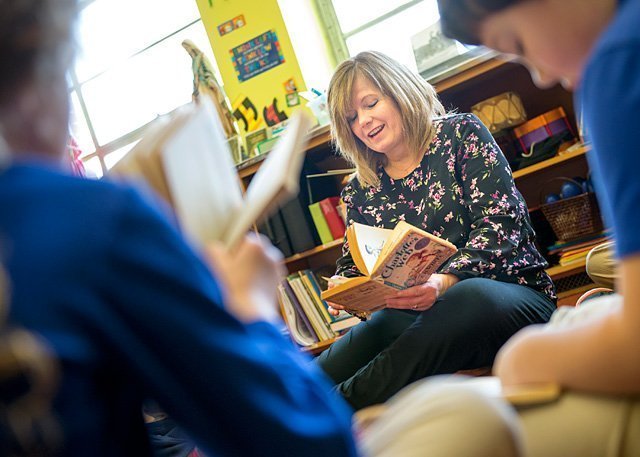 A longtime teacher at All Saints Academy in Corning, Kathy Boderick leads a class in a book discussion at the school on Jan. 20.

Given the modest pay and chronic enrollment challenges, why do many diocesan teachers dedicate most, if not all, of their careers to Catholic schools?

For Kathy Broderick, such intangible benefits as high educational standards, a family atmosphere and an environment that is faith-filled day in and day out inspire a sense of mission.

“It is this God-driven ‘beyond the job’ component that has sent and will continue to send families to our schools. It is the reason why I have remained a Catholic-school educator,” said Broderick, who has worked continuously for 17 years — and 20 overall — at Corning’s All Saints Academy, where she teaches music and technology and serves as librarian.

“The environment we have is a positive one to work in on many levels,” agreed Mary Beth Sullivan, the first-year director of technology at Brighton’s Siena Catholic Academy. She’s a veteran of six Catholic schools over a 30-year career as both teacher and administrator.

Meanwhile, Martha Grant and her sister, Lucyann Ormiston, have logged a combined 70 years in classrooms around the Diocese of Rochester.

“I can’t envision having done it any differently. I’m very happy with the choice I made,” said Grant, the educational-technology coordinator at Rochester’s Holy Cross School where she has worked since 2011.

“We grew up with Catholic schools. It just felt like this is where we were supposed to be,” remarked Ormiston, who teaches fourth grade at St. Pius Tenth School in Chili. 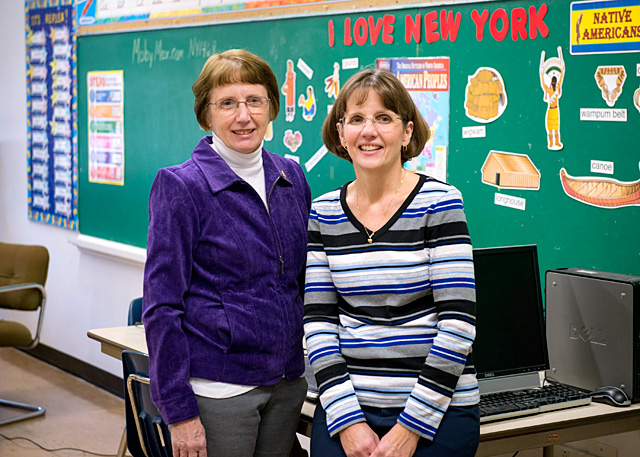 ‘The place to be’

Broderick began teaching at All Saints in 1994 after 13 years with Corning Inc. Anna Hurley, likewise, didn’t start out as a teacher, having worked for 14 years with developmentally disabled children and adults before landing in 1997 at St. Michael School in Penn Yan, where she remains today. She had learned of the teaching opening through attending daily Mass at St. Michael Church, and pursued it despite knowing the job would entail a pay cut.

Her decision “was really because I was part of the (faith) community and wanted to work with the people in it. I knew it was the place to be,” said Hurley, who is teaching a combined first/second grade class in 2016-17.

JoAnne Coutlee has taught at St. Michael School for nearly her whole career, although she did not attend Catholic schools and never planned to seek work in Catholic education. Nevertheless, she has been at St. Michael since 1998 and currently is teaching kindergarten.

“I really just wanted to get a job,” Coutlee recalled, laughing. “I got offered this job and loved it from the start. I loved the small classes, and the families are so friendly and supportive.”

Like Coutlee, Sullivan was simply looking for work when she took her first teaching job in 1987 at Greece’s St. Charles Borromeo School. As time went on, Sullivan came to appreciate that “I liked what I was doing,” and she has now been affiliated with Catholic schools for three decades and counting.

She said there’s a definite connection between her longevity as a teacher and the fact that “I am a product of a Catholic elementary school.” Hurley, similarly, credits her own Catholic education with helping guide her career path. Grant and Ormiston said they were strongly influenced by their parents’ encouragement to use their talents to pass on the faith, and viewed becoming Catholic-school teachers — both in 1982 — as a natural progression.

The sisters noted that their own children — and Ormiston’s grandchildren — attended Catholic schools; all four of Broderick’s kids, meanwhile, have gone through All Saints. In other signs of Catholic education persisting across generations, several teachers said they often end up teaching the children of former students, and that it’s not uncommon for Catholic-school graduates to return to their old schools as teachers.

Unfortunately, faculty and parent commitment has not been enough to keep all Catholic schools afloat amid declining enrollments and rising expenses in recent years. In fact, the first four schools at which Sullivan taught no longer exist today. Neither do any of Grant’s previous schools — three in all — nor one (St. Boniface, Rochester) where Ormiston taught for more than a quarter-century.

“It was almost like a death,” Grant observed regarding the sorrow experienced by students and staff at being uprooted from their beloved institutions.

Even so, Sullivan, Grant and Ormiston moved on to other Catholic schools — a sign of dedication Broderick said is typical in their line of work.

“Catholic-school teachers give their heart, soul and talent every day,” she remarked, adding that her colleagues often dip into their own pockets to fund books, supplies and subscriptions to online programs.

Similarly in Penn Yan, Coutlee said, “We have some really dedicated teachers who go above and beyond. We’re all working on fundraisers; we all do extracurricular things.”

“The parents are working as hard as we are,” Hurley said.

Great sacrifice can spawn considerable rewards, and Coutlee, for one, said she enjoys knowing she plays a part in providing superior education. Since the closing of Geneva DeSales High School in 2012, nearly all St. Michael graduates have gone on to attend public high schools, she noted, adding that her former students are consistently successful.

“They’re always on honor roll; we always hear good things about them. They’ve had the building blocks,” Coutlee remarked.

She said St. Michael students benefit from modest class sizes — “We’re able to do just a ton of stuff” — and Hurley added that teachers are given the flexibility “to use our gifts and talents for the benefit of the school.”

Ormiston and Grant, meanwhile, said they have benefitted from dedicated principals.

“Both of us have worked for just some incredible administrators who are so easy to work with, you didn’t want to leave,” Ormiston said.

Evidence of that support can be seen in the state-of-the-art computer equipment in their classrooms, Sullivan and Hurley said.

“I think sometimes the misconception is that we don’t have the same technology as other schools. That’s totally false,” Sullivan remarked. “Our diocese is very engaged in technology, and has been right from the get-go.”

What does separate Catholic schools from others, Sullivan said, is that she can freely “share the faith with the students.” To Hurley, the prayer and faith-sharing factor is so vital that “I can’t imagine working anyplace else.”

Broderick observed that by incorporating faith into all aspects of a student’s day, Catholic schools build strong morals and character. Grant noted that in a Catholic-school environment “you’re able to use Jesus as an example” in teaching right from wrong, while Ormiston said she values the schools’ emphasis on compassion and selflessness.

“It is so nice to work in an atmosphere where we can be conscious of the other person, to get out of this ‘me’ attitude. The Catholic schools do that so well,” Ormiston said.

Sullivan said Catholic schools are “very family based and community oriented, and that definitely is something that’s been an important part of my career.” Hurley, meanwhile, said she knows firsthand the benefit of being among caring folks, saying the St. Michael community has helped lift her through some personal difficulties.

“To be honest with you, I could not have continued without the support from people here,” she said.

Coutlee, her longtime colleague in Penn Yan, said her love of Catholic-school teaching is so strong that she long ago ceased thinking of the job as a career building block.

“My husband would say, ‘You’ve got to get into the public schools.’ After about eight or nine years, he stopped doing that,” she remarked.

“I have chosen to stay at All Saints regardless of several attempts from others to change my mind,” added Broderick in Corning. “It’s the best.”

Tags: Catholic Schools
Copyright © 2023 Rochester Catholic Press Association, Inc. All rights reserved. Linking is encouraged, but republishing or redistributing, including by framing or similar means, without the publisher's prior written permission is prohibited.