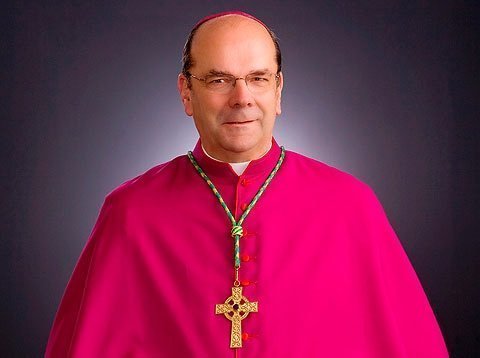 "Caretaker" was the word Bishop Cunningham used Sept. 21 to describe his role as the Diocese of Rochester’s apostolic administrator until the ninth Bishop of Rochester is named.

"It’s important to remember the work of the church goes on," he said during a press conference that day.

Father Joseph A. Hart, whom Bishop Cunningham has named as his delegate in the daily governance of the Rochester Diocese, explained that it was this third option that Pope Benedict XVI chose in appointing Bishop Cunningham to be apostolic administrator.

Father Hart, who was one of two diocesan vicars general and also moderator of the diocesan Pastoral Center under Bishop Emeritus Matthew H. Clark, noted that the appointment of an apostolic administrator in a vacant see is not unusual. For instance, he noted that Archbishop Alexander Brunett, archbishop emeritus of the Archdiocese of Seattle, was recently appointed apostolic administrator of the Diocese of Oakland, Calif. And closer to home, Bishop Robert J. Malone of Buffalo also continues to watch over his former diocese of Portland, Maine, Father Hart noted.

The appointment of an apostolic administrator also is not a signal that there could be a future combination of those dioceses, he said, as some have speculated could be the case for Rochester and Syracuse.

"Buffalo and Portland, Maine, are not being joined, and Oakland and Seattle are not being joined," Father Hart said. "This is a temporary kind of thing. While both dioceses (Rochester and Syracuse) are smaller than they once were, they are still much larger than many in the country."

In fact, apostolic administrators are not allowed to make major changes to the dioceses they are overseeing, he said. They are put in place to help manage the day-to-day operations of a diocese or archdiocese, but they are not authorized to start new initiatives, such as renovations or additions to parish properties, sales of parish properties, mergers or appointments of new pastors.

"In this case, (Bishop Cunningham) is a bishop and he can do everything a bishop does, like confirm, ordain," Father Hart said. "But because this is not his diocese — we are still waiting for the ninth Bishop of Rochester to be named — he’s not supposed to do anything new; no innovations. That’s the reason why diocesan and parish properties can’t be sold in the meantime. That’s why new pastors can’t be appointed. That’s why brand-new building projects can’t be started. He’s really watching over a diocese as opposed to moving it forward."

During the period that the diocese is without a bishop, there is no vicar general, and the diocesan Priests’ Council also is disbanded, Father Hart said. However, the judicial vicar, chief finance officer, chancellor and pastors remain in office. The diocesan Stewardship Council and the College of Consultors likewise remain in place.

In his role as apostolic administrator, Bishop Cunningham has said he will be present in the Diocese of Rochester as often as his schedule in Syracuse will allow. Bishop Clark also may be asked to assist at events, Father Hart said.

Although the process of naming a new bishop usually takes about a year from the time the see becomes vacant until it is filled, Father Hart said there’s no way to know how long it could take for the ninth bishop of Rochester to be named.

"If we look at the bishops that have been named lately, in Lincoln, Neb., it took two years," he said. "That’s extremely unusual. More likely it’s about a year, although last week a bishop was named after only 10 months."