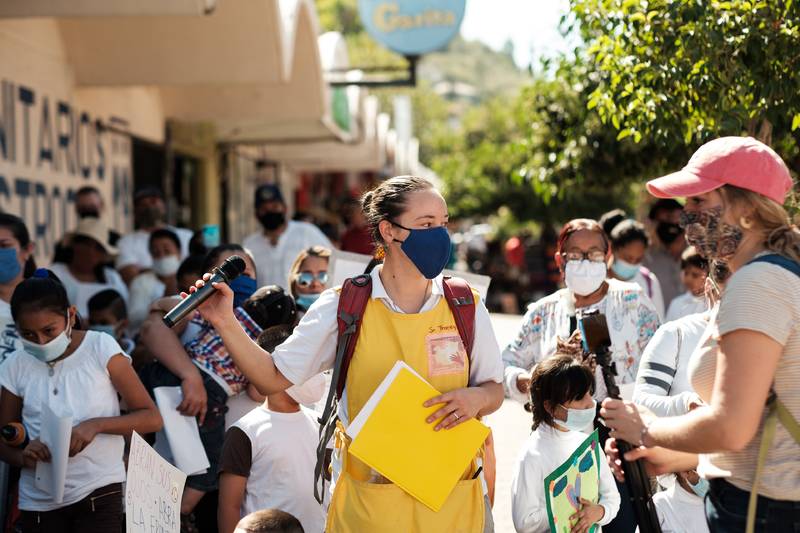 Sister Tracey Horan, associate director of education and advocacy at Kino Border Initiative is seen Oct. 21, 2020. “We have a responsibility to lift up migrant voices and make sure their real experiences are being highlighted,” said Sister Horan, a Sister of Providence of St. Mary of the Woods, Indiana. (CNS photo by Julius Schlosburg/courtesy Kino Border Initiative)

A few years ago, a woman migrating from Mexico to the United States with her children arrived at Kino Border Initiative’s center in Nogales, Arizona. Her family had suffered in custody with border control as her children’s food was taken from them and they were forced into a cold room. She had been cussed at and called names.

As she shared her experience with Sister Tracey Horan, a Sister of Providence of St. Mary of the Woods, Indiana, the religious sister asked her if she would like to file a formal report of what she experienced.

“I just saw her face change,” Sister Horan said, that it clearly meant a lot to the woman “just to know that it was possible that she could be heard and that her story could make an impact and that someone cared and wanted to acknowledge that what had happened to her was unjust.”

At the heart of Kino Border Initiative’s ministry is education, advocacy and care for migrants — from listening to their stories, offering food and shelter, to providing them guidance throughout their journey.

Through educational programing, Sister Horan, the associate director of education and advocacy, said she works to “move minds, hearts and policies toward more human migration.”

By inviting groups from throughout the United States and beyond to immerse themselves in the migrant experience, Sister Horan said that people are able to really learn the truth about conditions at the border and encounter those who are in the midst of their “sacred journey of migrating.”

Prior to the pandemic, about 40 groups would visit Kino Border Initiative each year.

“We really challenge them to return home and take action in their communities in solidarity with migrants,” Sister Horan said.

Working to advocate for migrants both in the United States and in Mexico, Kino Border Initiative documents abuses that migrants experience as they’re traveling to the border or while in the custody of U.S. officials and reports them to the proper authorities, Sister Horan said.

“Part of it is just people having the chance to be heard,” she said. “Sometimes people will come in and say that this is the first time in months or even in a year that someone actually cared about their story or why they are migrating.”

Much of the work of the Kino Border Initiative is rooted in Catholic social teaching on the dignity of the human person and the respect that every individual deserves as a child of God.

“We think a lot about the Holy Family here because we see many holy families that come through our door fleeing persecution for a number of reasons,” she added. “Venezuelans who are fleeing dictatorship and political persecution, mothers with small kids fleeing domestic violence, young people fleeing abuse at the hands of organized crime.

“For me, it’s so easy to see how the person of Jesus is so present here,” Sister Horan said.

Prior to the pandemic, Kino Border Initiative’s shelter and offices in Nogales would open up their soup kitchen to those who wished to attend Mass. Since the pandemic has introduced several challenges to their programming, Sister Horan said that ensuring that their work continues to “encounter” migrants has become a main priority.

“You see their faces and recognize the way that they light up — and so often I think people come just as much for our company and the environment of welcome that we have as they do for the food,” Sister Horan said.

As situations at the border are still difficult and often dangerous for migrants, Sister Horan said, “we have a responsibility to lift up migrant voices and make sure their real experiences are being highlighted.”

She encouraged people to reach out to their elected officials, expressing their concern and care for the migrants seeking shelter in the U.S.

To learn more about Kino Border Initiative and their ministry to care for migrants, visit www.kinoborderinitiative.org.

Von Dohlen is communications coordinator at Franciscan Monastery of the Holy Land in America.