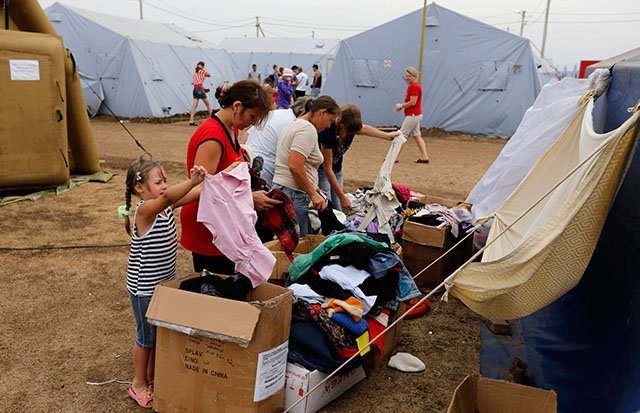 People look through donated clothing Aug. 18 at a temporary tent camp for Ukrainian refugees near the Russian-Ukrainian border. The U.N. Office for the Coordination of Humanitarian Affairs estimated Aug. 15 that 155,800 Ukrainians had been displaced by fighting, more than 2,000 people had been killed since mid-April and another 5,000 had been injured.

VATICAN CITY (CNS) — Caritas Ukraine and other humanitarian agencies in the country met in mid-August to face two big challenges: helping the thousands of displaced people find adequate shelter for the fall and winter; and, particularly, finding ways to deliver aid without getting shot at.

Andrij Waskowycz, Caritas Ukraine president, said that while no one has been able to verify in person reports of no running water and dwindling food supplies in Luhansk, telephone contacts with people in the city of about 200,000 people indicate a pressing need for aid.

"But the big danger for all humanitarian agencies is that there’s fighting there, and going in means to risk being shot at," he said Aug. 18 in a telephone interview with Catholic News Service. News agencies reported the same day that a rocket hit a convoy of civilians fleeing the town. It was not immediately clear who was responsible.

Ukrainian officials said Aug. 17 that their troops had entered the rebel-held city and re-captured a police station, but the fighting was continuing.

In Kharkiv, about 200 miles northwest of Luhansk, Caritas set up an emergency management center at the beginning of August to help the displaced, Waskowycz said.

"In the places liberated by the Ukrainian government," he said, Caritas and other agencies are delivering food and water while infrastructure repairs are made.

In towns like Slovyansk, recaptured in July, "we are organizing support for rebuilding," particularly focusing on schools and on the windows of the homes and apartments of 1,000 poorer families. People won’t be able to survive the winter in homes where the windows were shot out or broke during bombing.

The U.N. Office for the Coordination of Humanitarian Affairs estimated Aug. 15 that 155,800 Ukrainians had been displaced by the fighting, more than 2,100 people had been killed since mid-April and another 5,000 had been injured.

Helping the displaced and opening as many of Ukraine’s schools as possible Sept. 1 are key priorities for all the aid agencies, Waskowycz said. The two goals are closely connected, since many of the displaced are being housed in schools.