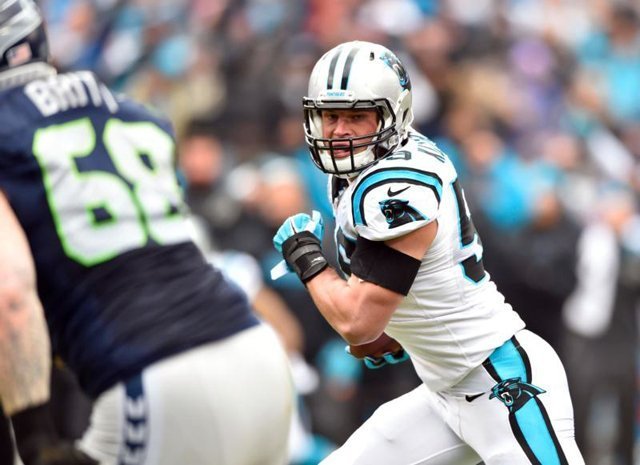 Carolina Panthers middle linebacker Luke Kuechly returns an interception for a touchdown Jan. 17 against the Seattle Seahawks in the first quarter of the NFC Divisional round playoff game in Charlotte, N.C. Kuechly, who will be the starting linebacker when the Panthers play the Denver Broncos in the Feb. 7 Super Bowl, credits his parents and his Catholic faith for making a positive impact on his NFL career and his outlook on life.
By SueAnn Howell
Catholic News Service
CHARLOTTE, N.C. (CNS) — Middle linebacker Luke Kuechly of the Carolina Panthers, the team going up against the Denver Broncos in the Feb. 7 Super Bowl, credits his parents and his Catholic faith for making a positive impact on his NFL career and his outlook on life.
"I went to a Catholic grade school, Jesuit high school and a Jesuit college, and I think you just learn certain things growing up in that environment.
Really, the biggest thing I learned from it is respect and to treat people correctly," he said after a Jan. 28 practice.
"Your background has something to do with it, but my parents I think were the biggest impact on that, as far as to be a good person. You know, it’s not that hard, as long as you’re nice to people, everything works out," he told the Catholic News Herald, newspaper of the Diocese of Charlotte. "Treat people how you want to be treated. It’s pretty straightforward stuff, and I think it makes things easier."
Kuechly, a product of St. Xavier High School, a Catholic boys school, near his hometown of Evendale, Ohio, and a graduate of Boston College, is known as a fierce competitor who does not give up, a natural and humble leader, the person everyone calls "the nicest guy on the team."
When he was in the fourth grade, Kuechly first played organized football with Cincinnati’s Catholic Youth Organization. In high school, he was a two-time All Greater Catholic League selection.
Kuechly, a three-time All America linebacker for Boston College, was the ninth overall pick in the 2012 NFL draft.
He was named the NFL Defensive Rookie of the Year in the 2012 season, and followed that up by being named the NFL Defensive Player of the Year by
The Associated Press in 2013, joining Lawrence Taylor as the only players in NFL history to win the NFL Defensive Rookie of the Year and NFL Defensive Player of the Year in successive years.
Kuechly said he doesn’t really have a special patron saint or a special prayer he always says before a game.
"We say a couple prayers in the locker room before games, though," he said.
The team is often seen praying at each game, and players are known as much for their charitable works off the field, especially for children in need.
Charitable works also were getting attention from supporters of both teams headed to the Super Bowl.
Gerry Carter, CEO and executive director of Catholic Charities of Charlotte, and Larry Smith, CEO and president of Catholic Charities of Denver, agreed to raise $50,000 by the end of the game in a fundraiser called Charity Bowl 50.
"It’s a worthy cause that will have a major impact on the lives of the poor and needy in each of our communities," Carter said. "All of our team’s fans and
Catholic Charities in the Carolinas look forward to this challenge, and the inevitable victory that will be ours."
Smith responded that Denver is not afraid of a challenge.
"Through Charity Bowl 50, Denver football fans have a real opportunity to show they have the best team spirit and a passion for serving others," Smith said. "This challenge is a true win for both Denver and Charlotte, but there’s no doubt we will seize the victory."
Anyone can participate in Charity Bowl 50 to help one of the charities raise the most money by donating online at CharityBowl50.org.
The site began accepting online donations Jan. 31 and will take them until the end of the Super Bowl Feb. 7. The donations will be tallied and counted toward the total amount raised. The winning charity’s CEO planned to hold a victory celebration during which charity employees will dump cold sports drinks over him. The losing charity’s CEO will dress in the opposing team’s colors and send a message of congratulations to the other charity.
The competition can be tracked on social media with the hashtag #CharityBowl50.
– – –
Howell is a senior reporter with the Catholic News Herald, newspaper of of the Diocese of Charlotte.
Copyright © 2022 Catholic News Service, Inc. All rights reserved. Linking is encouraged, but republishing or redistributing, including by framing or similar means, without the publisher's prior written permission is prohibited.