Carolinas brace for hurricane; seminary dedication is set to go on - Catholic Courier 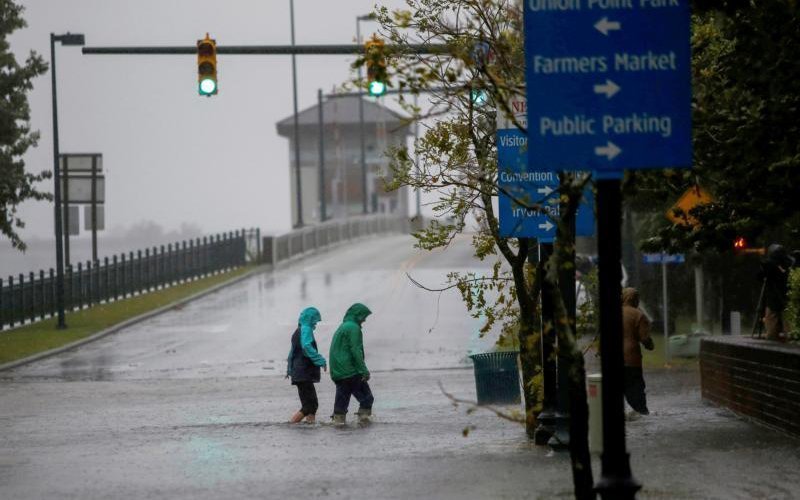 People walk on a local street in New Bern, N.C., Sept. 14 as water from Neuse River starts flooding houses ahead of Hurricane Florence making landfall in the Carolinas. The hurricane is poised to affect more than 10 million people in the southeastern U.S. (CNS photo by Eduardo Munoz/Reuters)

CHARLOTTE, N.C. (CNS) — With Hurricane Florence bearing down on the Carolinas, leaders in the Diocese of Charlotte leaders began taking precautions and staying in the loop with North Carolina emergency management officials.

When Hurricane Florence made landfall near Wrightsville Beach Sept. 14 at about 7:15 a.m., the storm had weakened slightly to a strong Category 1 storm with 90-mph sustained winds, according to the National Hurricane Center.

“Life-threatening storm surge and rainfall” as well as “tropical-storm-force winds” are expected for the next several days, the center reported.

Charlotte’s diocesan schools closed Sept. 14 and would determine if they also should close the following week.

Most parish festivals and celebrations had been canceled or postponed and pastors had urged people to pray for those in the hurricane’s path.

Parishes were instructed to adjust weekend Mass schedules as pastors see fit — as with other inclement weather conditions. Parishioners are being encouraged to check their parish websites or social media outlets for updates throughout the storm.

Father Christopher Roux, rector of St. Patrick Cathedral in Charlotte, advised parishioners to exercise caution when attempting to attend Mass during the Sept. 15-16 weekend. If weather conditions are too severe, he said, the cathedral will scale back and have one Mass on Sunday.

“Your obligation to attend is lifted if, in your good judgment, you determine that traveling to the cathedral is too dangerous. Taking risks will jeopardize your safety and the safety of others,” he said.

Staff at Catholic Charities Diocese of Charlotte are standing by, communicating with their colleagues on the eastern side of North Carolina in the Diocese of Raleigh to coordinate disaster response efforts.

“We await the landfall of Hurricane Florence and we hope and pray for protection against loss of life, injuries and property destruction,” said Joe Purello, who directs the Charlotte agency’s Office of Social Concerns and Advocacy.

One diocesan event not being canceled because of hurricane threat is the groundbreaking ceremony for St. Joseph College Seminary, planned for Sept. 15, just outside of Charlotte.

Charlotte Bishop Peter J. Jugis, clergy and supporters will break ground for the $20 million college seminary at the entrance to the 86-acre site in Belmont. Expected guests include town officials, the college seminary’s 21 students and faculty and monks from Belmont Abbey College, where the students take classes.

The day’s feast, Our Lady of Sorrows, is the driving force in moving ahead with the groundbreaking despite the anticipated bad weather, college seminary supporters said.

“The faith of the supporters of the seminary is impressive,” said David Hains, communications director for the Diocese of Charlotte. “At a time when the church is facing great turmoil, and coincidentally when we are facing the effects of a hurricane, they are pressing on with the groundbreaking.”

Father Matthew Kauth, the college seminary’s rector, said the date was significant as reparation for the church’s sexual abuse scandal.

“This building is a sign of the work that must take place, the building of strong and faithful men for the holiness of the priesthood,” he said in a Sept. 13 statement. “Brick and mortar of a building, form and strength of virtue, will rise on this site together.”

One supporter said that 100 years from now when people see the groundbreaking took place on Sept. 15 and recall the state the church was in it will “tell a beautiful story.”

The agency is working with local partners to have water, cleaning supplies, baby items and other needed supplies readily available in areas along the coast.

Catholic Charities USA has set up its website donation page and text-to-give platform to help individuals and families impacted by Hurricane Florence. As it did in response to last year’s hurricanes, the agency forwards 100 percent of funds raised to the local Catholic Charities agencies that serve the affected communities.

“We are praying for those affected by the storm,” said Dominican Sister Donna Markham, president and CEO of Catholic Charities USA. “Unfortunately, those most impacted by natural disasters are the individuals and families who are already struggling to make ends meet.

“But thanks to the generosity of our donors the most vulnerable have their immediate needs met and the long-term recovery support they need to rebuild their lives,” she said in a statement.

Catholic Charities USA said its staff members are prepared to deploy to local agencies that may need additional support. Its mobile response unit also is standing by to be sent to the region. The vehicle can be packed with nonperishable food items, health and hygiene kits and bottled water, all of which are ready for distribution. A trailer connected to the vehicle contains a washer and dryer that will allow survivors to clean their clothes. The mobile response unit also can be used as a field office.
– – –

Editor’s Note: Those wishing to donate to Catholic Charities USA disaster relief can text CCUSADISASTER to 71777 or call (800) 919-9338. The latest information on the situation can be found at CCUSA.faith/disaster.
– – –