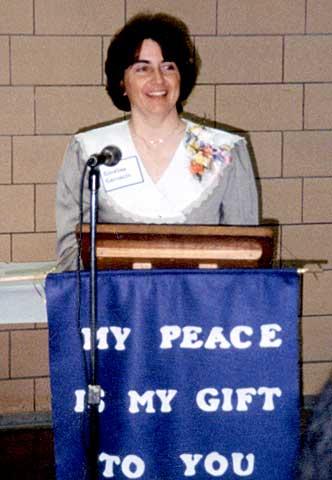 Throughout that time, she was the embodiment of the spirit and mission of Catholic Charities. Her work, deeply grounded in and emanating from her spirituality, was focused on direct service, but equally on advocacy and parish social ministry. She has been the person within diocesan Catholic Charities most responsible for promotion of parish social ministry over the last 20 years.

As the nature of parish social ministry was evolving in the early 1980s, it was defined by Catholic Charities staff: "Support of parishes to encourage them toward some form of outreach to those in need, training and sustenance of peer ministry, formation of informal but effective parish based information and referral networks, and development and support of parish based human development committees."

During her term at Catholic Charities of the Finger Lakes, Caroscio was assisted by Justice and Peace Coordinators Father Bill Spilly, Chris Grannis, Kevin Hennessey, Chris Wilkins and Scarlett Emerson.

Today, the work of parish social ministry in the agency is carried on by Justice and Peace Coordinator Ruth Putnam Marchetti, working with Executive Director Ellen Wayne.