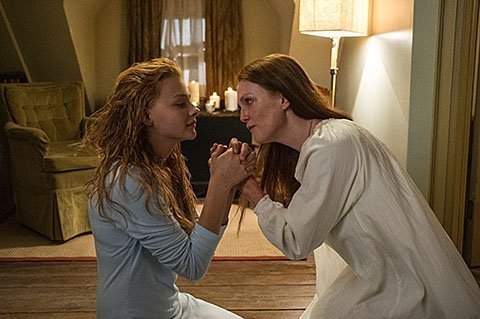 Chloe Grace Moretz and Julianne Moore star in a scene from the movie "Carrie." The Catholic News Service classification is L -- limited adult audience, films whose problematic content many adults would find troubling. The Motion Picture Association of America rating is R -- restricted. Under 17 requires accompanying parent or adult guardian.

Someone decided that a reboot of the 1976 horror film based on Stephen King’s 1974 novel was a good idea, though. So by gosh, by golly and by rote, director Kimberly Peirce has taken a crack at it, and here we are.

In the wake of the original film headlining Sissy Spacek, there followed a disastrous 1988 Broadway musical, a 1999 big-screen sequel, "The Rage: Carrie 2," and a 2002 TV movie on NBC. Troubled, naive Carrie White, humiliatingly splattered at the senior prom by a bucket of blood, now ranks in the remake league somewhere between "Anna Karenina" and "Dracula."

Let’s be clear what we mean by deranged: Margaret likes to lock her daughter into a closet to repent whenever she feels the girl has sinned, she refers to breasts as "dirty pillows" and she nearly killed Carrie at birth with a pair of scissors.

Peirce’s religious imagery includes reproducing one of the earlier film’s famous scenes in which Carrie directs a drawer full of cutlery at her mother, who’s then stuck onto a door like the arrow-riven St. Sebastian. Pierce also makes a nod to the novel’s use of Tennessee Ernie Ford’s gospel classic, "Let the Lower Lights Be Burning."

The plot, set in the present day, remains the same. Carrie does not understand menstruation; her ignorance leads to a mortifying scene in the communal high school showers. A cruel classmate, Chris Hargensen (Portia Doubleday), takes advantage of current technology to capture this on her cellphone and upload it to YouTube.

Kindly gym teacher Ms. Desjardin (Judy Greer) bans Chris from the prom as punishment, and Tommy Ross (Ansel Elgort) breaks through Carrie’s shyness to ask her to the dance. Carrie’s so happy, she makes her own gown. Chris is so angry, she plots a very public revenge.

In the meantime, though, Carrie discovers her ability to move objects around by directing them with her hands or by just glaring at them. She begins with water jugs and a restroom mirror, moves up to Stickley chairs and her mother, and by the time she’s queen of the prom, is ready to unleash mayhem.

Blood, and lots of it, is the leitmotif here. There’s so much gore, in fact, that it quickly loses all shock value. What’s left is a pretty tame gross-out attempt.