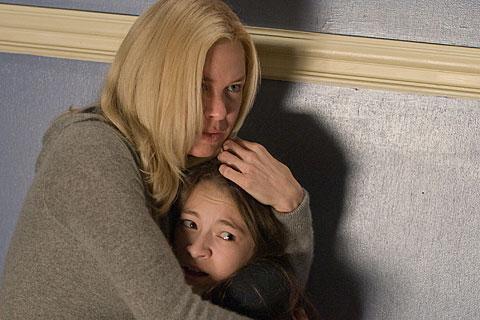 NEW YORK (CNS) — "Case 39" (Paramount Vantage), while not family fare, is the sort of turgid, clumsy self-parody of a horror film some adults might want to watch on DVD on a cold, rainy night, if they can make up a game to go along with all the ringing phones that are meant to portend disaster.

Director Christian Alvart and screenwriter Ray Wright scoop deeply from the cliches of demon-seed-children flicks, with the misplaced Renee Zellweger as the quivering protagonist trapped behind locked doors.

Zellweger is social worker Emily Jenkins, who rescues doe-eyed 10-year-old Lilith Sullivan (Jodelle Ferland), whom she believes to be an abuse victim, from her parents, Edward (Callum Keith Rennie) and Margaret (Kerry O’Malley). Mom and Dad, who have an appropriately spooky old house in Oregon, are arrested and later sent to a psychiatric hospital after they attempt to kill Lilith by shoving her into a gas oven — which, for extra effect, they light.

Emily takes temporary custody of Lilith, and things go smoothly at first, but it turns out Lilith’s parents were on to something. The child is mendacious, perspicacious and a stone-cold demon-possessed killer. She can wreak havoc at long distances, always, for some reason, signaling her mayhem with phone calls. And yet she has trouble with deadbolts.

How she got the demon is never explained. How to stop her takes up the entire second hour of the film. Exorcism is never discussed, even though Lilith (wouldn’t that name alone be sort of a giant clue?) has a large crucifix on her bedroom wall at home and Emily once encounters the only police officer who believes her, Detective Barron (Ian McShane), as he leaves what clearly appears to be a Catholic worship service.

Bradley Cooper as Doug, a psychiatrist, has just enough screen time to ask some penetrating questions, set off Lilith, and meet his doom with hornets.

Jensen is a guest reviewer for Catholic News Service. More reviews are available online at www.catholicnews.com/movies.