Christmas is over but appeal still stretches toward goal - Catholic Courier 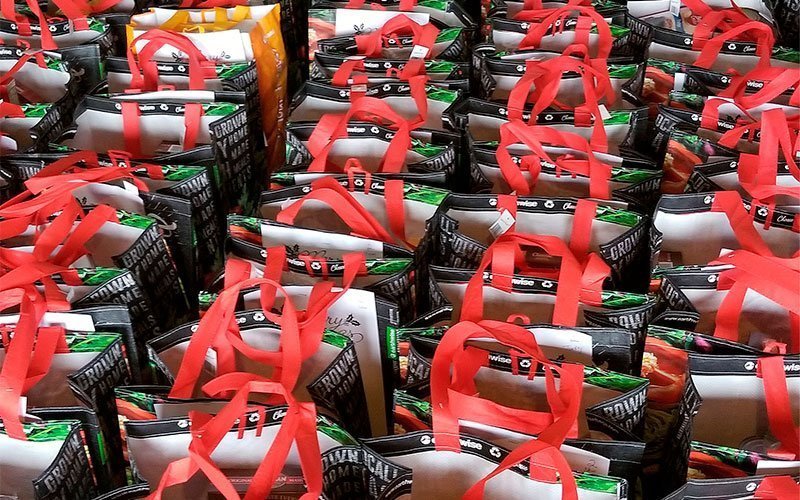 Bags containing Christmas food items for people in need are lined up in the rectory garage of Holy Cross Church in Rochester, awaiting delivery on Dec. 16 by volunteers. (Courier photo by Mike Latona)

Even though the Christmas season is over, time remains to make contributions to the 2018-19 Catholic Courier/Catholic Charities Christmas Appeal, which is more than $8,000 short of its annual goal.

Now in its 49th year, the annual appeal raises money that is used year-round by the emergency funds of various Catholic Charities agencies and other affiliated agencies throughout the Diocese of Rochester. A shortfall would reduce these agencies’ options in assisting needy people who are awaiting or do not qualify for other forms of aid.

The goal of the 2018-19 appeal, which began at Thanksgiving, is $45,000. As of Feb. 1, 441 donors had contributed $36,698 to this year’s appeal, which closes Feb. 28, according to Chloe Longabaugh, appeal coordinator and circulation manager for the Catholic Courier and El Mensajero Cat√≥lico newspapers.

Twenty people donated more than $1,000 of that total on Nov. 29, 2018, during ROC the Day, the United Way of Greater Rochester’s annual 24-hour communitywide fundraiser.

Longabaugh said the flow of donations received has dwindled with the conclusion of the Christmas season, but she’s hopeful that people will still give to the appeal, no matter the size of their donation.

“We will accept any donation that comes in,” she said, noting that small donations have always been the lifeblood of the appeal.

To contribute, send checks payable to Christmas Appeal to the Catholic Courier, PO Box 24379, Rochester, NY 14624. Please include your name, address, city, state, ZIP code and telephone number, and indicate whether the gift is being made in honor or memory of someone.