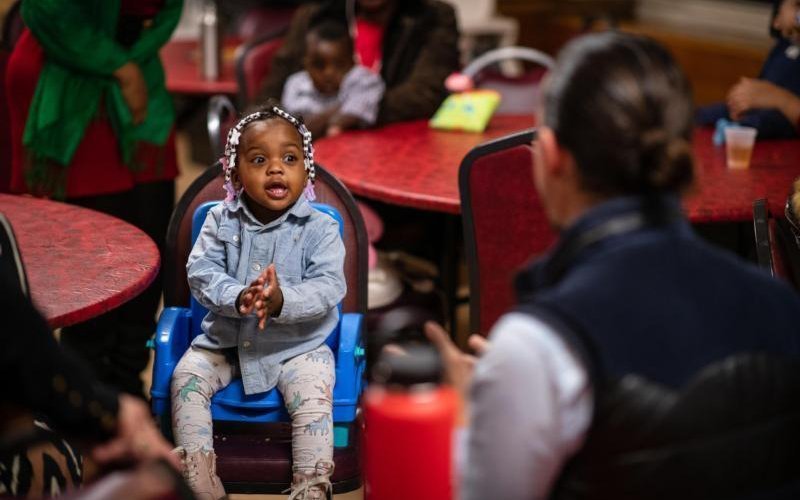 NEW YORK (CNS) — Lullabies have been sung by parents to their children for time immemorial.

At Siena House, a temporary residence for families in the Bronx, parents are continuing the tradition by crafting their own memorable lullabies that are emerging from personal experience and deeply held emotions.

With the help of artists from Carnegie Hall, the Lullaby Project is helping parents who are experiencing significant life crises — homelessness or domestic violence — bond with their children through the creation of personal lullabies.

Composer and music educator Thomas Cabaniss and other Carnegie Hall artists developed the project in 2011.

“The project was structured over the course of a month,” said Tiffany Ortiz, assistant director of early childhood programs at Carnegie Hall. “Eight to 10 women and seven Carnegie Hall artists spent an hour together, to establish a level of trust. The mothers wrote letters to their babies, including nicknames, hopes, dreams and wishes for their child. They distilled those key phrases and put hearts around the words they wanted in the lyrics to their lullabies. Then they worked on the music side.”

The result was so positive that, in 2013, officials at the New York City Department of Homeless Services recommended Siena House be one of the first places for the Lullaby Project to expand.

“At first, there was some hesitancy from the mothers,” said Dominican Sister Mary Doris, Siena House director. “They were not sure they would ever be able to compose a lullaby for their babies.”

Such hesitancy is not unusual, Ortiz said.

“A parent might say, ‘I’m not a singer,’ but we can say, ‘There are things you already do.’ Their voices are going to mean the most to their child, will resonate most. They’ve been hearing that voice in the womb. There’s a comfort in that,” Ortiz said.

Comfort might seem distanced from the stressful realities of some Siena House residents.

“We have a lot of victims of domestic violence. Women who have endured rape. Women who come from families that are rejecting them due to the fact that they have this child or are pregnant. Our women come from a place of anger, and many times they’re frustrated, screaming, telling the baby to shut up,” Sister Mary said.

“But with great sensitivity and gentleness, words were created and set to music.”

When the creative process was completed, the lullabies endured. The mothers professionally recorded their lullabies and received CDs of the songs. More importantly, they continued incorporating them into daily life.

“I remember hearing some of those lullabies in the hallways,” Sister Mary said. “They were actually using them.”

From the first collaborations, the project has become a monthly activity at Siena House, providing residents an opportunity to focus on positive, maternal feelings and craft their personal lullaby. They are guided by questions such as “What do you want to tell your baby, now?” and “What is your hope for this child?”

“When the mothers are sitting with the artist, they’re finding precious time to really tap into their own feelings for their child,” Sister Mary said. “Even saying things like, ‘I love you so much, I’m sorry I can’t provide a home for you right now’ or, ‘I’m sorry for you not having your father around.'”

As the lullaby forms, so do deep emotional bonds.

“Crying happens,” Sister Mary said. “A couple of little toddlers might be clapping, dancing. It’s a time with the mom, when they can set aside their anxieties and zero in on this precious gift. And, I say, ‘When your little guy gets to be 21 and you play this lullaby, it’ll carry on for that child’s life, too.”

Although each lullaby is different, Sister Mary notes an underlying similarity in the effects of the parent-child bonding.

“You see the beauty that’s so real and expressed in a song,” she said. “The effect is peace; there’s a peace that comes over them.'”

In the peace and stillness, Sister Mary recognizes the presence of prayer.

“We have women of every faith you can imagine and women of no faith. Those moments of the lullaby are prayer in action. (A mother might say) ‘I feel my love is coming out to my baby.’ In my mind, that is what prayer is: sharing love, God’s peace,” Sister Mary said.

Besides the mothers and children at Siena House, the Lullaby Project helps the staff appreciate positive qualities within the participants.

“When the staff is able to hear an individual mom who has written this beautiful song, it gives them a glimpse of the beautiful mother inside,” Sister Mary explained.

The Lullaby Project has inspired similar efforts and expanded to include fathers and other family members.

But at its core are the individual bonds forged and the peace shared.