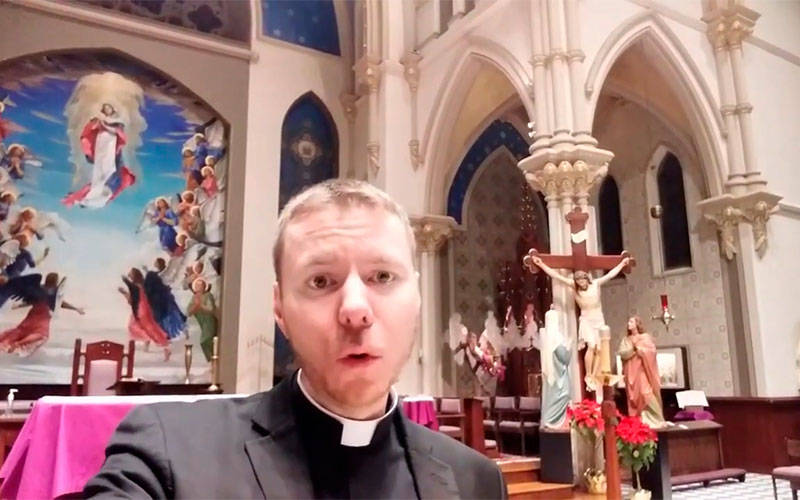 What does a more than-100-year-old song about whaling in New Zealand have to do with Lent 2021?

A local priest, Father Justin Miller, tapped into the newfound popularity of the former to help Auburn Catholics understand some of the ways the 2021 Lenten season will be different from those of previous years. The result is a popular YouTube video that features Father Miller singing about Lent from St. Mary Church in Auburn, where he is parochial vicar.

“Soon may repentant-time come, a time for praying for everyone. What way, before Lent is done, will you see God’s kingdom grow?” Father Miller asks rhetorically in song.

The song Father Miller sings in the video is a sea shanty, which is the type of traditional folk song that would have been sung in the 1800s by seamen as they worked on large sailing vessels. This genre received an unexpected boost in popularity in late 2020 and early 2021, when users of the social media platform TikTok began posting videos of themselves singing sea shanties. Many of the videos featured one song in particular, titled “Soon May the Wellerman Come,” or sometimes simply “Wellerman.” This song from New Zealand is about a whaling ship and its crew’s encounter with a right whale.

Father Miller saw some of the TikTok videos of people singing this song and “could not get the tune out of my head,” he recalled. Rather than feeling annoyed by the catchy song’s staying power, however, Father Miller recognized an opportunity for evangelization.

“A few days before Lent, I realized that I could change the lyrics and make an introduction to Lent and the peculiarities of Ash Wednesday during coronavirus,” Father Miller said.

“Wellerman” opens with the lines, “There once was a ship that put to sea, the name of that ship was the Billy o’Tea. The winds blew up, her bow dipped down. Oh blow, my bully boys, blow.” Father Miller’s Lenten adaptation of the shanty opens with the lines, “O there was a time when all could see, black foreheads on Ash Wednesday. What a change this year will be, blow, ye ashy dust, blow.”

Later in the song, Father Miller explained that ashes would be sprinkled on Catholics’ heads this year rather than rubbed on their foreheads in a Vatican-suggested attempt to avoid physical contact. He also reminds Catholic viewers of the Lenten practices of fasting and abstaining from meat.

“Ash Wednesday and each Lent Friday, we eat no meat or fowl-like prey, no snacks before your fish filet, we fast lest we plateau,” he sings.

Father Miller said he is hardly the first person to modify a secular work in this way.

“There is an old pattern among the Catholic tradition of taking secular literature and poetry and adapting its meter and form to Christian themes,” he said, noting that while he was in seminary he studied famous Greek plays that had been modified to include Jesus and Mary as main characters.

“I had been wanting to repurpose some folk and Irish songs with lyrics related to Auburn or Catholicism in Auburn, and this was the first venture in that area,” said Father Miller, who also is parochial vicar at Sts. Mary and Martha Parish in Auburn and Our Lady of the Snow Parish in northern Cayuga County, which both are clustered with St. Mary Parish.