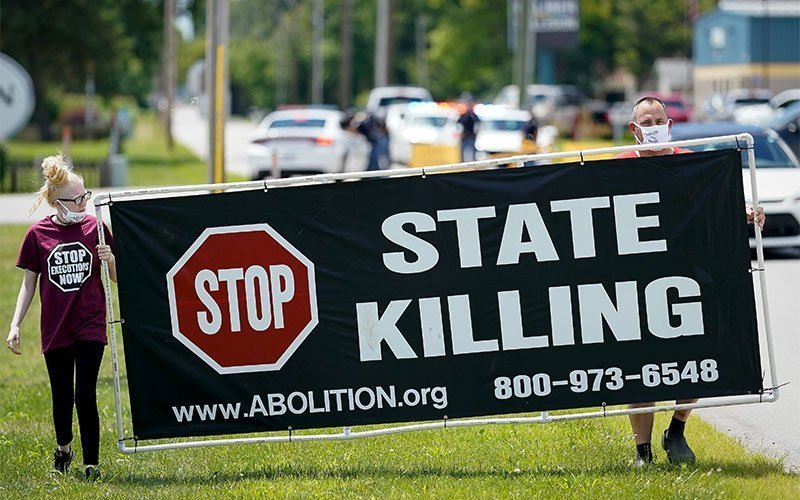 Demonstrators are seen near the Federal Correctional Complex in Terre Haute, Ind., showing their opposition to the death penalty July 13, 2020. (CNS photo by Bryan Woolston, Reuters)

WASHINGTON (CNS) — Pope Francis tackled several issues in his new encyclical, but the section devoted to ending capital punishment was particularly cheered by U.S. Catholics who oppose the death penalty.

The pope reiterated how St. John Paul II had described the death penalty as “inadequate from a moral standpoint and no longer necessary from that of penal justice,” but then went further by adding: “There can be no stepping back from this position.”

“Today we state clearly that ‘the death penalty is inadmissible,'” he wrote, quoting from the revised Catechism of the Catholic Church, and adding: “The church is firmly committed to calling for its abolition worldwide.”

Sister Helen Prejean, a Sister of St. Joseph of Medaille and longtime anti-death penalty activist, said in a tweet Oct. 4, the day the encyclical was issued at the Vatican, that she was pleased with the pope’s “ringing proclamation of the inviolable dignity of all human life, even the life of murderers.”

She also said she was “heartened by the church’s unequivocal opposition to governments’ use of the death penalty in all instances.”

Over the years, Sister Prejean met with St. John Paul II and Pope Francis urging them to establish the Catholic Church’s position as unequivocally opposed to capital punishment. In 2018, Pope Francis announced new language of the catechism that says the death penalty is inadmissible because it is an attack on the inviolability and dignity of the person, with no exceptions.

The activist tweeted Oct. 4 about her own experience ministering to those on death row, saying that she has “seen close-up the torture and suffering of human beings, rendered defenseless and killed by the state, their lives stripped of all dignity.”

In the seven paragraphs examining capital punishment in the encyclical, “Fratelli Tutti, on Fraternity and Social Friendship,” the pope examined this form of punishment through the lens of human dignity and said: “The firm rejection of the death penalty shows to what extent it is possible to recognize the inalienable dignity of every human being and to accept that he or she has a place in this universe.”

The encyclical’s section on the death penalty is placed between the injustice of war and the need for dialogue between members of different religions.

Sister Prejean said the pope’s words will “help end this unspeakable suffering and spark the Gospel of Jesus to be lived in its fullness: restoration of human life, not humiliation, torture and execution.”

She tweeted Oct. 5 that the pope’s encyclical says the death penalty is a “false answer” that does not resolve the problems it meant to solve and instead introduces “new elements of destruction in the fabric of national and global society.”

Krisanne Vaillancourt Murphy, executive director of the Catholic Mobilizing Network, which works to end use of the death penalty and promotes criminal justice reform and restorative justice, said in an Oct. 5 statement that by dedicating a section of his document to ending the death penalty, “Pope Francis has leveraged the full weight of the church’s teaching behind its opposition to capital punishment.”

She pointed out some of the pontiff’s words she said have particular significance during the church’s Respect Life Month and ahead of the annual commemoration of World Day Against the Death Penalty Oct. 10: “It is impossible to imagine that states today have no other means than capital punishment to protect the lives of other people from the unjust aggressor.”

Vaillancourt Murphy also said the pope’s “acknowledgment of modern society’s capacity to avoid recourse to the death penalty strikes a blatant contrast to the U.S. federal government’s recent resumption of executions after a 17-year hiatus.” This summer, seven men on the federal death row were executed and an eighth execution is scheduled for Nov. 19.

She also noted that Pope Francis not only addressed “the proclivity toward vengeance that fuels the practice of capital punishment,” but he warned against becoming “obsessed with taking revenge and destroying the other” and reminded the document’s readers that “nothing is gained this way and, in the end, everything is lost.”

Vaillancourt Murphy said the encyclical highlights a number of social concerns and the need to build a culture of encounter, which she said points to “a more restorative way of understanding harm and violence.”

This approach, she added, centers on the people and relationships that were violated and seeks “justice that values human dignity, healing, accountability and the hope of redemption for all involved.”