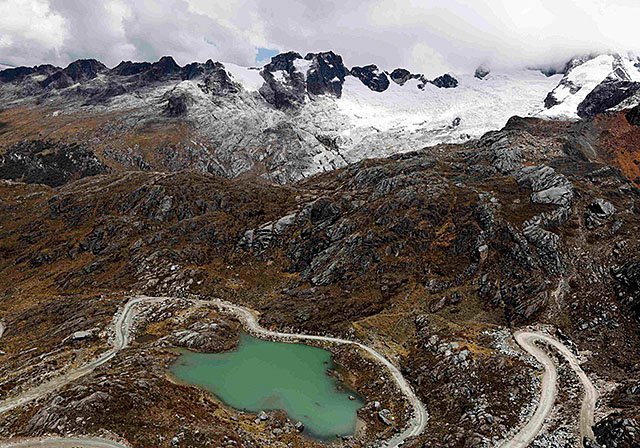 A view of a glacial lake is seen in Huascaran National Park in Peru in late September. Catholic organizations are counting on "mobilizing church communities" and "raising worldwide awareness" at the 2013 U.N. Climate Change Conference to be held Nov. 11-22 in Warsaw, Poland.

The Conference of the Parties, running until Nov. 22, will review progress since the 1997 Kyoto Protocol, which committed industrialized countries to reduce greenhouse gas emissions.

Catholic organizations will be present in the Polish capital too, lobbying for action through parallel discussions.

"Delegates in Warsaw should remember their decisions will affect the lives and interests of billions of people. These are issues of justice which should matter to everyone," she said.

The Warsaw U.N. climate talks will be the 19th to review the Kyoto accords, which were extended last December at Doha, Qatar, with a new commitment by 2020 to cut carbon dioxide emissions by at least 18 percent below 1990 levels.

It follows the Fifth Assessment Report in September by the Intergovernmental Panel on Climate Change, which provided more evidence that human activity was the "dominant cause" of global warming.

If global temperatures rose beyond an international agreed threshold of 2 percent by the end of the century, the Catholic agencies warned, climate change could soon "spiral out of control."

The same message was presented at an Oct. 21 Brussels "dialogue seminar," organized by the Commission of the Bishops’ Conferences of the European Community and the Conference of European Churches and attended by expert negotiators from the European Union’s Bureau of European Policy Advisers.

A statement at the end of the seminar said man-made climate change was now "indisputable," adding that the EU had a "moral responsibility to act," as the second-largest emitter of carbon dioxide, after the United States.

"It is the poor who suffer because of climate change and climate injustice. We must take away from that suffering, rather than add to it, by making use of worldwide solutions," he said.

Although Catholic organizations will be in Warsaw conference as observers only, Markus Drake, communications officer for CIDSE, a network of Catholic development agencies in Europe and North America, said he hopes for a strong church platform.

The "strategic aim," he said, would be to lay the groundwork for a new deal on global emissions in 2015, while also pressing developed countries to deliver on the $100 billion already pledged annually for climate financing by 2020.

But he said he hopes governments will provide resources not just for long-term carbon dioxide reduction, but also to tackle damage already caused by climate change.

"A lot of the money promised by Western governments simply hasn’t materialized," said Drake. "We’re hoping to get the message across that these are concerns which should unite and mobilize Catholics worldwide."

But church organizations point to other concerns as well.

Heat waves across Europe have increased deaths among older and poorer citizens, while flash floods in Africa have been four times worse than in any previous decade.

While climate-related food shortages have fuelled conflict in areas like South Sudan, half of all international disasters are currently connected with climate change.

The Brussels seminar statement said church representatives were ready to make a "substantial contribution" by helping change lifestyles and consumption patterns and by promoting "examples of best practice" within the church.

Drake said he thinks the Catholic Church is well placed globally to raise awareness and mobilize a broad-based audience.

In Asia, Africa and Latin America, Catholic leaders are having an impact on the climate change debate, particularly when their own parishes are affected by refugee displacement and agricultural dislocation.

But even where Catholics are only a small minority, such as in India and Bangladesh, the church’s charities and associations are also exerting a strong influence.

"Communities under threat are often centered around local churches, who can create sustainable solutions and protect livelihoods," Drake told Catholic News Service interview Nov. 8. "The science on climate change is now clearly established, so we must ensure faith-based concerns are given a serious hearing."

The Warsaw Conference of the Parties will include a symposium at Warsaw’s Cardinal Stefan Wyszynski University, attended by church representatives from Nigeria to Indonesia, as well as an ecumenical service at the city’s Catholic cathedral and a side event with the Geneva-based World Council of Churches.

Opromolla said Catholic groups will be counting on a new climate change deal to be "fair and just" and ambitious enough to "safeguard dignity and rights for the most vulnerable."

"We know countries represented here have conflicting and sometimes opposing interests. What matters is that the solutions arrived at won’t impose unnecessary burdens on those who’ve contributed least to climate change and have fewest means to counter it," she told CNS Nov. 8.

"Although we don’t have the same status and decision-making powers as government representatives, we’re confident we’ll be heard if our message is strong, united and consistent," she said.