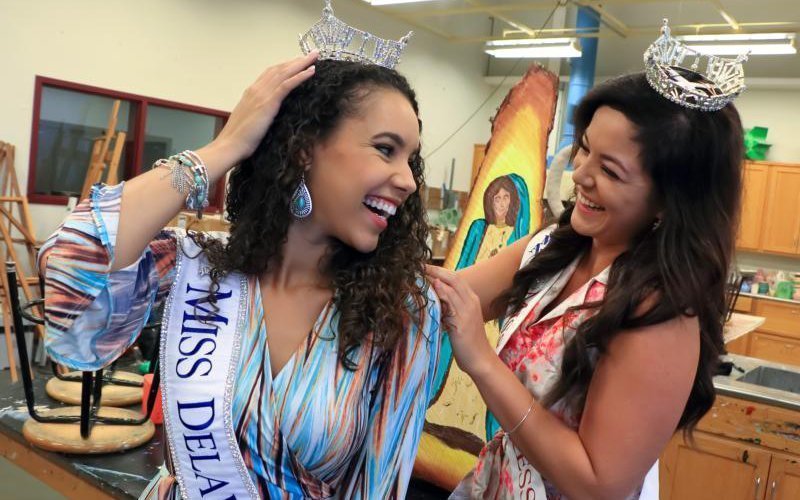 Miss Delaware Joanna Wicks and runner up Rebecca Gasperetti smile Aug. 9 in the art room at St. Thomas More Academy in Magnolia, Del. Wicks said she will rely on God and the words of St. John's Gospel to help her stay calm during the competition, which concludes Sept. 9. (CNS photo by Don Blake)

MAGNOLIA, Del. (CNS) — Wonder Woman may have helped Joanna Wicks advance to the Miss America pageant, but the reigning Miss Delaware will rely on a higher power to help her stay calm during the competition.

Wicks, 24, speed-painted Wonder Woman as her talent when she won the Miss Delaware title in June. She planned to paint the fictional superhero during her 90-second talent act in Atlantic City, New Jersey.

Drawing Wonder Woman seemed a perfect fit not only for Wicks, who teaches art at St. Thomas More Academy in Magnolia, but for the competition as well.

But Wonder Woman won’t help Wicks beyond the talent segment during 12 days of appearances, rehearsals and competition, which was to end Sept. 9. Instead, Wicks will turn to God and her faith to “help calm me down (when) it gets really hectic.”

Wicks’ favorite scriptural passage, John 1:5, has helped her stay on task during the last year as she juggled her schedule to keep up with everything. That passage goes, “The light shines in the darkness, and the darkness will not overcome it.”

“Last school year was my first year at St. Thomas More and I was doing the Miss Wilmington and Miss Delaware (competitions), and I was in my last year of study for teacher certification,” Wicks said.

She became good friends with fellow St. Thomas More teacher Rebecca Gasperetti, who was first runner-up to Wicks in the Miss Delaware pageant. The two helped one another prepare for the contest. They also worked together on St. Thomas More’s spring production, “High School Musical,” with Gasperetti as director and Wicks as set designer.

The hectic pace continued in August as Wicks made appearances as Miss Delaware and practiced most of each day for the Miss America pageant, “whether it was mock interviews or practicing my talent.” She also packed for her trip, tended to her rescue dog, a shepherd mix named Chief, and prepared for the start of classes at the academy Sept. 4.

She will miss at least the first week of classes because of the competition — and two additional weeks should she be crowned Miss America — so she needed to have everything ready for substitute teachers during that period.

Wicks could easily have been overwhelmed by those different pressures but relied on St. John’s Gospel passage. “No matter what you are going through, nothing should dim your light,” she said.

Her students have a stake in Wicks’ success, though she thinks some of them did not see her as potential Miss America material when she announced she was seeking to become Miss Wilmington. “I dress differently for work — I get messy every day (teaching art) — than I do for the Miss Delaware side of things. (That’s) all glamorous and evening gowns and such.”

The students sometimes helped her practice, even during class. “They would be drawing, and they’d raise their hand and say, ‘So, Miss Wicks, how do you plan to end global warming?’ They would give me interview questions all the time.”

Wicks never imagined herself as a possible Miss America while growing up in Baltimore County, Maryland, one of two children of Andrew and Jodi Wicks. But she knew she wanted to teach. “I’m from a family of teachers,” she said, noting that her mother teaches high school English and a grandmother teaches middle school math.

Her first taste of pageant life came as a high school senior, when she entered he Miss Maryland Teen USA competition. She also participated in the Miss Delaware USA pageant in 2014 before joining the Miss America program. The Atlantic City competition marks her fifth pageant.

She will use her status as Miss Delaware to promote awareness and prevention of domestic violence after learning of its widespread impact while minoring in women’s studies at the University of Delaware.

A common thread through Wicks’ art, teaching, pageant life and work against domestic violence is her Catholicism. Take domestic violence, where she said her work “is all about love and acceptance and respecting other people. Those are core values that you find in Catholicism and Christianity.”

While some may wonder what contests like the Miss America program have to do with faith, Wicks has met many fellow contestants willing to share their faith. Backstage at the Miss Delaware competition, she said, “a bunch of us were holding hands and praying together, praying that everyone did well.”

Her faith provided an attitude that saw her through the Miss Delaware competition, which she will use in Atlantic City.

“Throughout the whole process I was like, ‘OK, if I’m meant to be Miss Delaware, great, but if not, I know that there is something else I’m supposed to be doing,'” Wicks said. “So, I just went out there and tried to do my best and left the rest up to God.”

Morton writes for The Dialog, newspaper of the Diocese of Wilmington, Delaware.