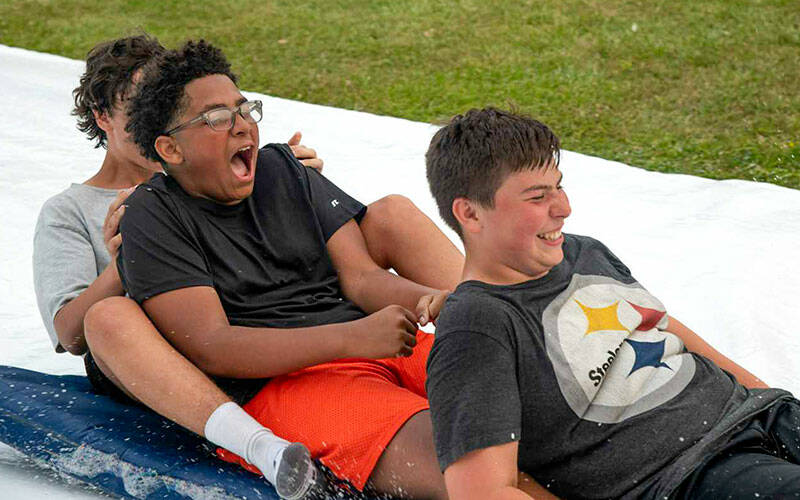 The months leading up to the summer of 2021 were filled with uncertainty and questions for the coordinators of two local Catholic camps.

Would families feel comfortable sending their children to camp — or attending camp themselves — during a global pandemic? Would camp organizers be able to develop and implement the plans necessary to safeguard the health of campers and staff alike? And would they be able to deliver the kind of experiences generations of families have come to expect from them?

The answer to all of those questions is a resounding yes, according to both John Quinlivan, executive director of Camp Stella Maris, and Kerri Nowak, president of Camp Koinonia Inc. The camps have been serving Catholic children and families for generations, albeit in different ways. Camp Stella Maris, which is located on the shores of Conesus Lake in Livonia, offers a traditional sleep-away camp program for children between the ages of 7 and 15, and a day-camp program for children between the ages of 5 and 12. Camp Koinonia, located in Italy Valley near Naples, offers a series of weeklong programs for Catholic families.

The arrival of COVID-19 in the region in March 2020 threw a monkey wrench into both camps’ summer 2020 offerings. Camp Stella Maris was forced to cancel its summer programming but was able to recoup some of its losses by renting cabins out to individual families, who were able to use the camp’s outdoor equipment as well. Camp Koinonia offered a heavily modified version of its Family Camp programming for two weeks instead of four.

The summer of 2021 marked a return to more traditional programming for both Camp Stella Maris and Camp Koinonia, although there were several key differences between this year’s offerings and those of pre-pandemic years. One of the steps taken at Camp Koinonia, for example, was to ask all campers to either have been vaccinated against COVID-19 or be tested for the virus before coming to camp, Nowak said. Campers complied without complaining, she added.

“We’re very fortunate in that our families, no matter where they stand on COVID and the vaccine and everything, put others first,” Nowak said, noting that the camp took several other precautions as well. “Unlike in years past, we did give each family their own cabin wherever we could, so that families wouldn’t have to worry about sharing air, even with a sliding partition between the rooms.”

Three of the four weeks of Family Camp were slightly less full than usual, but the program was still fairly well-attended, Nowak said. Camp Stella Maris also hosted fewer campers than usual, which was intentional, Quinlivan said, noting that both the overnight and day-camp programs operated at about 80 percent of their capacity.

“Typically, we have 16 kids in a cabin. This year, we limited it to 12 kids and put three cabins together for a cohort,” he said.

The cohorts stayed together each day, and separation was maintained between the cohorts at all times, so that if a positive case of COVID-19 was to pop up during camp, the number of campers exposed to the virus would be limited. When campers gathered for Mass outdoors, the members of each cohort stayed together within circles that had been painted on the grass, Quinlivan said. Cabin-mates stayed together for meals, and second seatings were added for both lunch and dinner to allow for more space between campers while they ate, he said.

The measures taken at Camp Stella Maris and Camp Koinonia appear to have been successful, as neither camp reported any cases of COVID-19, Quinlivan and Nowak said. What’s more, some of the changes implemented this year proved very popular among campers and staff alike and may become permanent, Quinlivan said.

“You were sort of forced into doing things, and some of them were better. … It’s kind of rare in a 95-year-old institution that you get an opportunity to try a bunch of new things. Things that make it better for the campers and the staff, we’ll keep,” he said.

Even the measures that were not quite so popular, such as indoor mask-wearing for unvaccinated individuals, were accepted without argument, Quinlivan said. Families were grateful to be able to send their children to camp, and the kids were happy to be there, he added.

“People were pretty excited to be coming out of the pandemic and be able to worship together and grow as families together,” Nowak agreed. “It just brings such joy and renewal to families.”