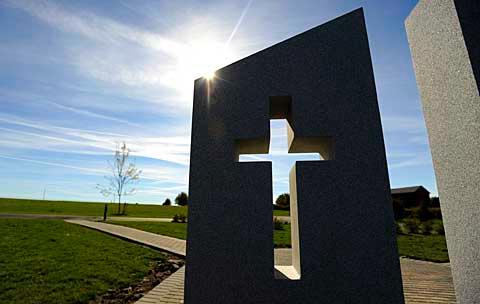 Sunlight shines on a monument to firefighters, law enforcement and emergency personnel at Ascension Garden, the new Holy Sepulchre Cemetery site in Henrietta.

Catholics in the Diocese of Rochester now have more options to choose from when it comes to Catholic burial.

Holy Sepulchre Cemetery in Rochester recently opened another cemetery, Ascension Garden, at 1900 Pinnacle Road in Henrietta. The new cemetery officially opened Aug. 18 and full-time staff members were on site by early October, according to James Weisbeck, Holy Sepulchre’s executive director. Already there have been three burials at Ascension Garden, Weisbeck added, and approximately a dozen burial rights have been purchased there.

"The feedback that we’re hearing is quite favorable," he said.

Weisbeck said the impetus for the new cemetery actually came around 2004, when Holy Sepulchre’s market research revealed that many people choose a cemetery based on its location and proximity to their community. Further research suggested the southeastern corner of Monroe County might be a prime location for a new Catholic cemetery.

"The southeast seems to be the spot least served by Catholic cemeteries, and also where the most growth is taking place. That’s why we felt we wanted to get out there," Weisbeck explained.

Holy Sepulchre purchased 109 acres of farmland and immediately began developing about 40 acres of that for the office, mausoleum and first burial sections. Much of the land was leased back to the former owner so he could continue farming it, Weisbeck said.

"We want him to do that because that keeps the land in very good shape. Of course we would develop it over time. There’s a lot of room for expansion," he said.

Ascension Garden eventually will be able to accommodate about 100,000 burials, Weisbeck added. It will be able to perform traditional in-ground burials as well as mausoleum burials and the burial of cremated remains, and will feature a special section in honor of military veterans. This section has a large, multisided monument that features representations of the various branches of the U.S. military.

Another special section at Ascension Garden will honor such emergency-services personnel as firefighters, paramedics and law-enforcement officers.

"It has a huge monument honoring the groups, and (emergency-services personnel) can buy in those sections for themselves and their spouses," Weisbeck said. "That’s something we think is a little bit unique. We’ll see how popular it is."

The cemetery will be able to accommodate a recent trend toward "green burial," which is interment in burial site that remains as natural as possible, Weisbeck added. Green burial can entail such choices as declining to use embalming chemicals, caskets or vaults. While this trend has been the subject of some hype in recent years, Weisbeck said he has seen very few people go through with it thus far.

Ascension Garden also will feature several columbaria, which are free-standing structures with niches to hold cremated remains. Columbaria have been popular at Holy Sepulchre, and the structures at Ascension Garden currently are under construction but should be completed by the end of November, Weisbeck said.

"(Columbaria are) something that there’s not a lot of in this area. We’re building these columbaria with very nice walkways," he added.

Cremation has become an increasingly popular trend in recent years, Weisbeck noted. In the three-month period of June, July and August, 32 percent of all the burials at Holy Sepulchre involved cremated remains. Such remains had previously accounted for just 20 percent to 25 percent of all burials, he said.

To accommodate that trend, the mausoleum at Ascension Garden also will include niches for cremated remains.

Weisbeck said the "heart and soul" of the cemetery will be the mausoleum’s chapel, which will be air conditioned and able to accommodate more than 150 people. The entire mausoleum will be heated. The mausoleum is expected to be completed in mid-December, and Bishop Matthew H. Clark is scheduled to bless Ascension Garden Cemetery in a 9 a.m. ceremony on June 22, 2011, Weisbeck said.

"It doesn’t mean that you have to be Catholic to be buried there. Any person who makes the purchase, certainly any of their loved ones can be buried at that location, because obviously we don’t break up families," he added.