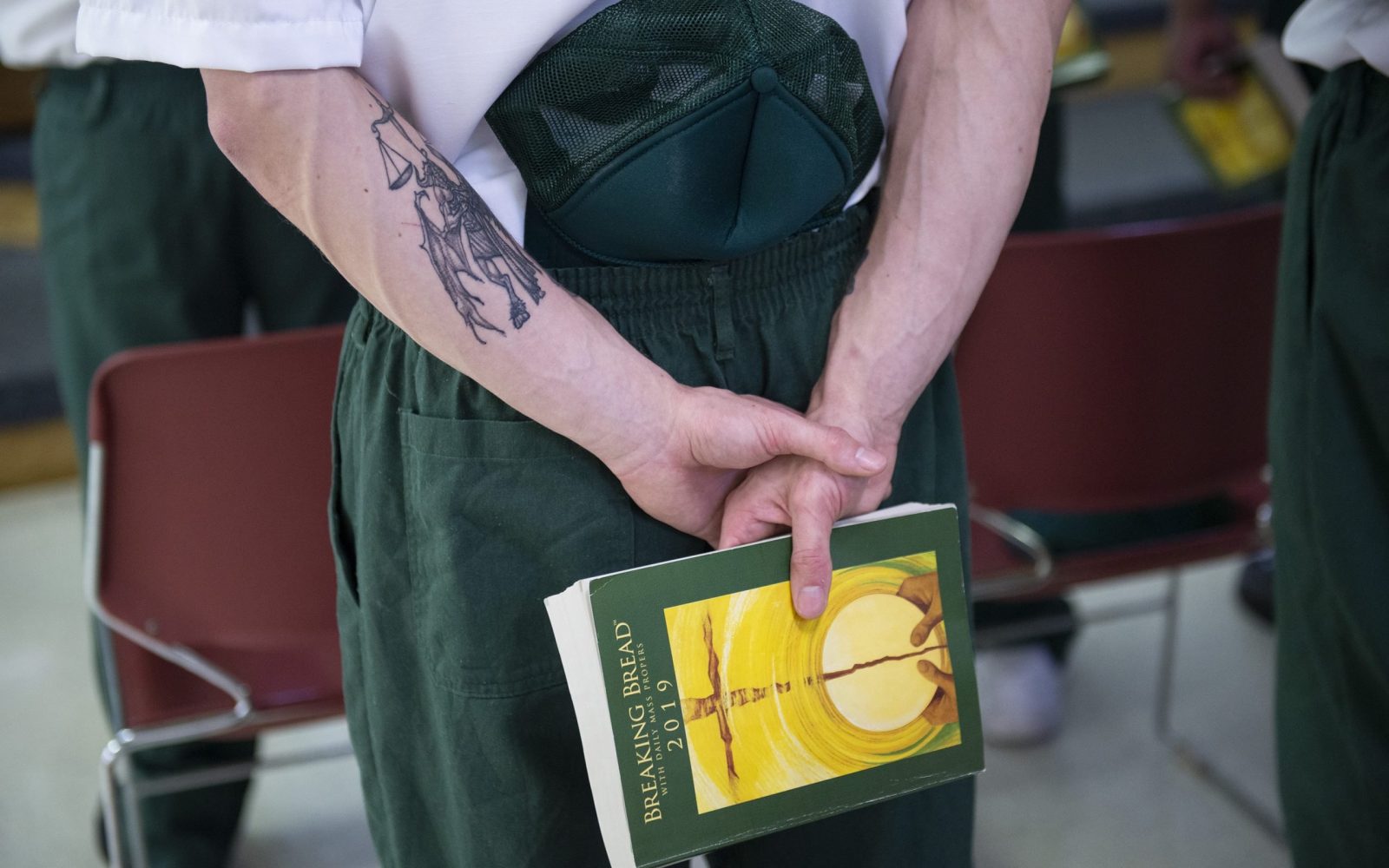 WILLARD — Describing actions that helped land him at Willard Drug Treatment Center, Angel recalled how addiction became a stronger guiding force in his life than his own moral code.

“I did uppers, cocaine, crack — anything to keep high,” Angel said, adding that he turned to stealing in order to purchase drugs even though, previously, “I never stole in my life.”

“You forget God, you forget your family,” Angel stated. “You cheat, lie and steal.”

He spoke on a late-June Saturday afternoon in the basement of the Willard campus’s maintenance building, where a weekly Communion service had just concluded in a makeshift chapel. The event was attended by Angel and 14 fellow inmates who sat in folding chairs, with two guards stationed near the doorway. Four verses of “Amazing Grace” began the 30-minute service; many in attendance knew the lyrics and sang along. Two men volunteered as lectors for that upcoming Sunday’s readings. During the prayers of the faithful, for which participants were invited to offer their own petitions, several men prayed for their families; one asked God “that the charges brought against me don’t lead to more imprisonment,” and another prayed to “stay clean and sober.”

Also during the service, worshipers listened intently to the homily of Deacon Thomas Ruda, who presided over the service, with Deacon John Brasley assisting. Deacon Ruda described drug addiction as a largely spiritual battle that can’t be won without God.

“You can’t have God in one hand and the drugs in the other. You have to let go of one or the other,” Deacon Ruda emphasized.

Shedding drug addiction is the brass ring for inmates who arrive at Willard, a specialized state facility in Romulus, Seneca County, near the eastern shore of Seneca Lake. Willard features a unique 97-day treatment program as a sentencing option — at a judge’s discretion — for individuals convicted of a drug offense as well as parole violators who otherwise would have been returned to state prison.

The facility has existed since 1995 on the campus of the former Willard Psychiatric State Hospital. It operates under the philosophy that treatment is more effective for drug offenders than punishment alone — a premise that Deacon Ruda strongly supports.

“Willard is a godsend,” said Deacon Ruda, who served as chaplain at Willard from November 2017 to April 2019 and remains active there as a mentor to Deacon Brasley, his full-time successor.

Willard features shock incarceration programming — a boot-camp environment typified by strict discipline and days largely filled with drills and labor. All who attended the Communion service had shaved heads, and each was clad in green dress slacks, a white shirt and a green tie; for more physical activities, they wore red jumpsuits. Each part of an inmate’s day is carefully structured; the Willard experience also includes substance-abuse treatment services as well as classroom education and vocational training in such areas as painting, flooring, building maintenance, horticulture and masonry.

According to Martin Titus, Willard’s deputy superintendent for program services, the drug-treatment center currently houses approximately 500 men and 100 women and is consistently at or near capacity. Titus added that Willard is the largest facility of its type in the state, operating at the security level of a medium-security prison. Inmates range in age from 18 into their 60s.

Assisting in Willard’s rehabilitation process are Deacons Ruda and Brasley, the only chaplains of any denomination there. They work with people of all faiths, holding regular Saturday services for both men and women and meeting with inmates individually upon request or on the advice of an official. In addition, the chaplains avail themselves to members of the Willard staff “who are often in a stressful environment,” Deacon Ruda said.

“We are here for everyone,” added Deacon Ruda, who is currently the full-time chaplain at Five Points Correctional Facility, also in Romulus. He additionally serves as a parish deacon in Schuyler Catholic Community.

Breaking down the walls

Along with the ministry of Deacons Ruda and Brasley, the Diocese of Rochester as a whole is putting a greater focus on drug addiction. In its recently announced agenda for 2019-20, the Diocesan Public Policy Committee is imploring parishes to raise awareness in this area while supporting folks in addiction recovery and their loved ones. The committee also has drawn attention to the growing opioid crisis during both 2017-18 and 2018-19.

Deacon Ruda observed that substance abuse is a daunting issue to tackle based on the immense power that drugs hold over one’s body, mind and spirit. Among the toughest parts of his ministry, he acknowledged, is learning of former Willard inmates who have relapsed and even died due to drugs after leaving there. He also voiced frustration over working with inmates who don’t wish to change.

Yet positive change becomes more possible, he said, when a chaplain can guide an inmate toward confronting deep personal issues that led that person to become embroiled in drugs.

“As chaplains, we need to see that door open and get in there,” Deacon Ruda said.

“I really enjoy moments like that,” Deacon Brasley added. “You get through, break through these walls and see who the real person is beneath that exterior. When I do get that breakthrough, I see it immediately. It gives me hope.” From there, Deacon Brasley said, he can explore with an inmate how that person’s life might change for the better once he or she is no longer incarcerated — although, Deacon Ruda asserted, it’s still up to the individual to embrace that better life.

“We’re not here to solve their problems, we’re here to walk with them. They have to decide to change their ways,” he said.

Inmates attending the Communion service in June voiced hope that they can change — permanently — going forward.

James, who has been addicted to a variety of drugs, said he prays frequently that “I’ll see the future of all my kids.”

Edward, who is in his late 50s and battling a cocaine addiction, also cited family as a motivation to kick drugs.

“This is the end of the line. I know I just can’t do this anymore. I have children and grandchildren,” he said.

Angel, meanwhile, said he’s been reading books about counseling and decided that “I want to go to college and become a counselor, to help people like me.”

James, Edward, and Angel all said that the Communion services and other support from Willard’s chaplains have helped increase their belief that these hoped-for changes can actually stick — and that’s music to Deacon Ruda’s ears.

“I love being a chaplain, encouraging them to see differently. We have an opportunity to soften their hearts,” he said.