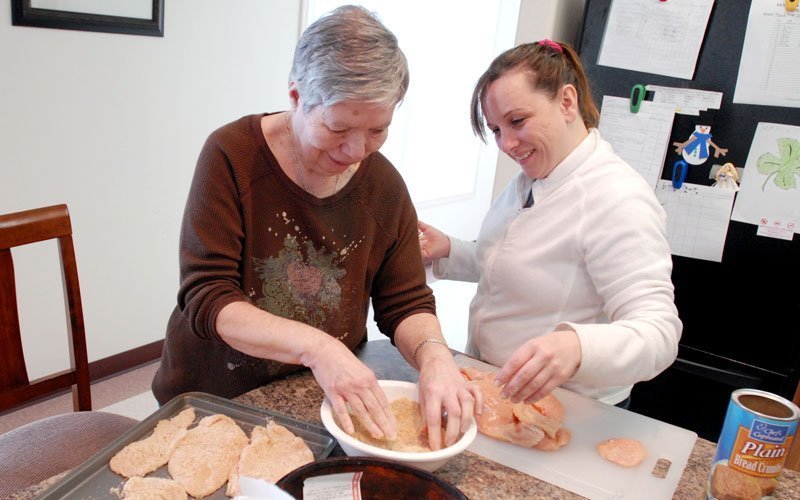 Crowley House was built in cooperation with Providence Housing Development Corp. — which developed the property — and with funding from the federal Department of Housing and Urban Development and the New York state Office of Mental Retardation and Developmental Disabilities, said Ann Sawyko, development director for Catholic Charities Community Services. Nicoletta Building Contractors and Development served as the general contractor, while Fraser-Willey did the architecture and engineering work, Sawyko said.

Twelve people had been living in Gavitt House, and most of these residents had been elderly, Sawyko said. Some of the residents had lived at the facility since 1980, had been residents of Newark Developmental Center and were part of the deinstitutionalization of people with disabilities, she added.

“That whole population is aging. The need to downsize the existing house became evident as the stairs in the two-story structure became a challenge to more and more residents. Those who are now located in Crowley House were becoming more and more frail because of age,” she said.

Crowley House’s residents, most of whom are in their mid-60s and 70s, are grateful they don’t have to negotiate stairs in their new home, said Karen Lauster, manager at Crowley House and former assistant manager at Gavitt House.

“It’s much easier for them to get around here. In fact, one of the girls mentioned the other day, ‘I’m so glad we don’t have to do stairs anymore,'” Lauster said.

Although most are elderly, the residents of Gavitt House belonged to several different generations, and the differences between these groups sometimes caused tension in the facility, Sawyko added.

“It wasn’t ever a problem, but you could see the frustration,” she said.

Gavitt House residents also lived two to a bedroom, and although this hadn’t posed much of a problem, Catholic Charities Community Services officials felt the residents would benefit from having their own rooms.

“There are benefits to privacy, even if it’s just time-outs for people. It gets pretty tense with six individuals and probably at a minimum two to three staff in a house,” Sawyko said.

Agency officials hoped the construction of a new facility would solve those problems. Six former Gavitt House residents moved into Crowley House Dec. 28, 2007, and celebrated the move with a New Year’s party, she said.

Some of the residents at first were nervous about having their own bedrooms, but once they got over their fears they soon realized how comfortable their private rooms were, Sawyko said.

“This is the first time most of them have had a bedroom of their own. They enjoy having their own rooms,” Lauster said.

Crowley House’s six inhabitants also are pleased with the general environment within the house and the facility’s layout, she said. They like to gather around an island in the kitchen and talk, and they can’t wait until spring ushers in the nice weather so they can go outside and use the patio at their new home.

“I think it will be nice once they can go out there and enjoy it,” Lauster said.

“All those other residents came to the opening voluntarily. These are their friends and they’re supporting them in their new home,” she said.

Crowley House residents are always excited to see their friends from Gavitt House, Lauster said, and are looking forward to inviting them to the new house again in the future.

“We’re planning on having a picnic this summer on the patio and having them over,” she said.