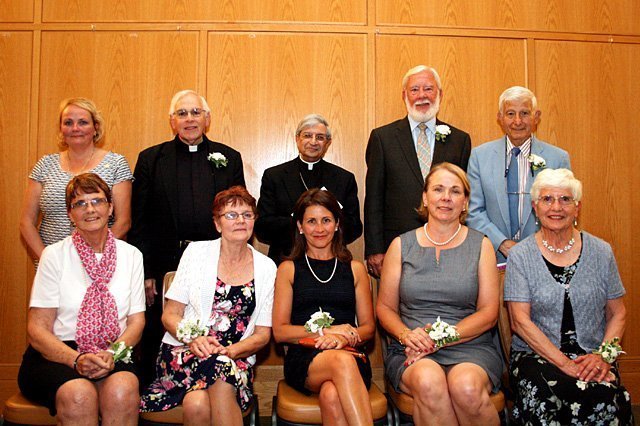 Catholic Charities of the Finger Lakes Executive Director Ellen Wayne and Bishop Salvatore R. Matano pose with winners of the Vita Award and Sharing the Light awards. In the back row are Wayne (from left), Father Thomas Mull, Bishop Matano, Peter Koch and Leonard DeFrancesco. In the front row are Linda Raide (from left), Debbie Cornall, Liz Gilges, Gretchen Koch and Shirley DeFrancesco.

Each of these individuals has made a conscious decision to make a difference in the lives of countless others, according to Ellen Wayne, executive director of Catholic Charities of the Finger Lakes.

A Waterloo native, Father Mull attended St. Mary School in Waterloo and DeSales High School as well as St. John Fisher College and St. Bernard’s Seminary. He was ordained March 19, 1976, by Bishop Joseph L. Hogan. He served as director of the Diocese of Rochester’s Office of Liturgy from 1982-94 and served at Rochester’s St. Andrew, St. Ambrose and Sacred Heart Cathedral parishes.

He was pastor at St. Mary Parish in Canandaigua from 2000-12, when St. Mary merged with St. Bridget/St. Joseph in East Bloomfield to form St. Benedict Parish. He served as pastor of St. Benedict from 2012-13, when he was assigned to Our Lady of Peace Parish in Geneva, where he currently is pastor. He has served on Thompson Health’s board of trustees and the board of directors of St. Francis Housing Development Corp., which was working to transform the former St. Francis School building in Geneva into housing for senior citizens. He currently is the diocesan liaison for the Nocturnal Adoration Society and chaplain for School of the Holy Childhood and also presides over a weekly "Mass for Shut-Ins," which is televised on WHEC-TV 10.

Debbie Cornall attended Sacred Heart School and Our Lady of Mount Carmel High School, both in Auburn, before going on to Cayuga Community College and the Cayuga-Onondaga School of Nursing. She has worked for Auburn Memorial Hospital and for an Auburn internist.

Cornall is a faith-formation teacher at Sacred Heart Parish and also teaches English as a second language to Haitian workers in a migrant camp in King Ferry. She also has been an advocate for victims of sexual assault and has worked with Chapel House homeless shelter in Auburn. When her son, Joseph, was serving in Iraq with the New York National Guard in 2005 she developed the Child to Child program, though which Auburn residents donated clothes, school supplies, diapers, shoes and food to children and families in Iraq. She plans to soon work with the Veterans Administration to offer respite care for homebound veterans and their families.

Leonard and Shirley DeFrancesco have been married 59 years. Leonard served in the U.S. Army for two years and also has been a history teacher and guidance counselor for the Phelps Central School District. He also taught fellow educators as a part-time instructor for BOCES. Shirley served as an administrative assistant at Hobart and William Smith Colleges in Geneva for 24 years.

The couple volunteers at Catholic Charities of the Finger Lakes’ Geneva Community Lunch Program and has been active in the Hildreth Hill Neighborhood Association, also in Geneva. Leonard has served as a Little League and basketball coach, faith-formation teacher at St. Stephen Parish in Geneva and a member of DeSales High School’s board of education. He currently is a member of the Ontario County Watch Task Force and works with the Ontario County Youth (Peer) Court. Shirley was involved with St. Stephen School and currently bakes for Our Lady of Peace’s Martha Ministry, volunteers at Geneva’s Center of Concern and is a member of the Sweet Adeline’s International Seneca Soundwaves Chorus.

Peter and Gretchen Koch have been active in both the Seneca Falls community and the automotive industry for a number of years. Peter served in the U.S. Army for three year before working for Ford Motor Co. He and Gretchen owned several car dealerships between 1980 and 2012 and have consistently tithed, making contributions to a retreat center in Mexico, Habitat House in Seneca County, the Nicaragua Project of St. Francis and St. Clare Parish and a number of other causes.

Linda Raide attended Worcester Central School in central New York before earning a bachelor’s degree from SUNY Oneonta, a master’s degree from Nazareth College in Pittsford and an advanced degree in educational administration from SUNY Brockport. She has been a home economics teacher in Central Square and Penn Yan, principal of Penn Yan Middle School and manager of radio station WOZO in Penn Yan.

Raide has been involved with Cub Scouts and the Junior Football Cheerleaders as well as a number of community organizations, including the Yates County Cancer Society, the Community Poverty Initiative, Milly’s Pantry, the Yates Christmas Program, the Yates County Board of Elections and the Center for Dispute Mediation. She belongs to St. Mark’s Episcopal Church and is on the board of directors for the Keuka Comfort Care Home.