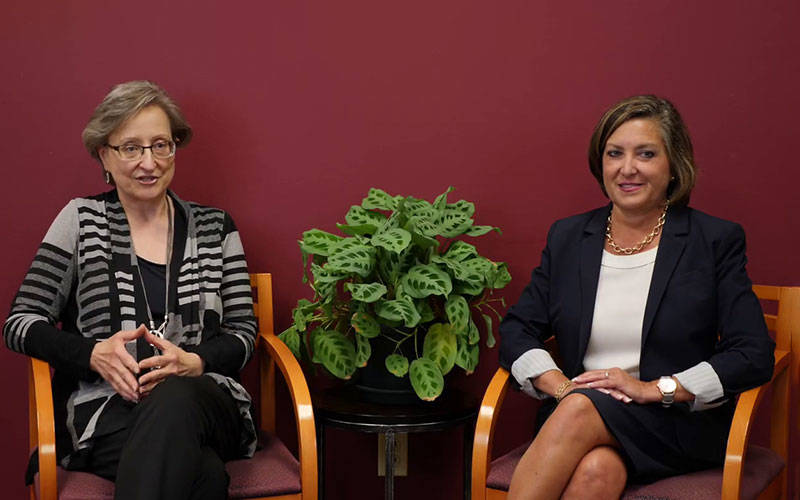 As a result of that dinner meeting — and months of study and work — Bessette and VanAuken now are preparing to merge their agencies. Bessette will retire at the end of 2021, and VanAuken will become president and CEO of the newly formed Catholic Charities Family and Community Services Jan. 1, 2022. The board of directors of Catholic Charities of the Diocese of Rochester voted June 29 to approve the merger.

VanAuken said she was not entirely surprised last summer when Bessette asked her what she thought about the idea of merging their agencies. Over the years, the two executives had occasionally remarked on the complementary nature of their respective agencies’ work and the potential they saw for collaboration. By the summer of 2020, Bessette, who came to Catholic Family Center in 2012 after a 28-year career at Xerox Corp., was considering retiring from her post.

“I was called to come here and to work for Catholic Family Center for the last 10 years. I also feel I am (now) called to continue to serve the community in a different way,” Bessette said of her upcoming retirement. “I looked at my retirement and said, ‘What a perfect opportunity to be a catalyst.’”

“It really made sense,” VanAuken remarked, noting that her agency’s strategic plan already had prioritized looking for ways to work more closely with its sister Catholic Charities agencies.

Catholic Charities Community Services’ board of directors also supported the idea, so the two agencies began a period of study and “due diligence” around the idea of a merger. A Synergy Grant from the United Way of Greater Rochester assisted them in this process, as it allowed them to work with a consultant who was able to to help them through the steps required in such an endeavor.

“We would not have had the bandwidth to do all of the due diligence without a consultant,” especially while trying to deliver services to clients during an unprecedented global pandemic, Bessette said. The grant also will fund some of the implementation costs as the merger moves forward, she noted.

Costs are not the motivation for this merger, however, so there are no planned cost reductions or staff layoffs, both executives noted. In the future, as employees — particularly those involved with the new agency’s administrative functions — retire or leave, positions may be adjusted as needed to ensure funds are used as efficiently as possible, VanAuken said. There really is no duplication when it comes to the two existing agencies’ front-line workers, as the two currently serve different populations, Bessette added.

Since 1980, Catholic Charities Community Services has served people with developmental disabilities and those living with such significant health challenges as traumatic brain injury, HIV/AIDS and chronic illnesses. Meanwhile, since 1917, Catholic Family Center has offered programs to help such vulnerable populations as refugees and immigrants, families facing poverty and individuals battling substance-abuse issues. Catholic Charities Community Services’ coverage area extends through all 12 counties of the Diocese of Rochester, while Catholic Family Center’s services have primarily been focused in the Greater Rochester area.

“The services both organizations provide are similar in nature but they reach different populations of people,” VanAuken said, noting that she hopes the merger will help the clients of one existing agency access services offered by the other.

Catholic Charities Community Services has expertise in working with the intellectually and developmentally disabled community, and members of this community frequently deal with behavioral health issues as well, VanAuken said. Catholic Family Center is known for the behavioral-health and mental-health services it offers, she added. Bringing the two agencies together may streamline the process of obtaining services for clients who qualify for them, she said.

“What a better experience it would be for the client who would be receiving service,” she said, noting that the merger should not be disruptive for existing clients. “They’re going to be working with the same people they work with on the staff. They’re going to be going to the same locations. They’ll just have more available to them.”