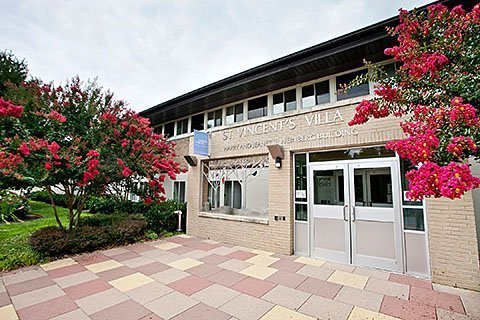 Catholic Charities of Baltimore is proposing to house up to 50 unaccompanied immigrant children and youths at St. Vincent's Villa in Timonium, Md., a residential treatment center for children who have experienced abuse, trauma or neglect. The agency's decision has been met with mixed responses.

BALTIMORE (CNS) — After news broke July 17 that Catholic Charities of Baltimore planned to house unaccompanied immigrant children at a Baltimore-area facility, executive director William J. McCarthy said the first response he received was positive: an email praising the agency’s decision with a pledge of $200 in support.

Others like it have poured in to the agency, Maryland’s largest social service provider.

As for the detractors?

"Most of the responses I’ve received are from supporters," he told The Catholic Review, newspaper of the Baltimore Archdiocese. "What I’m really encouraged by is the number of affirming, supportive and thoughtful people who recognize this for the humanitarian crisis that it is — that we are focused on caring for children in need — and have the ability to separate the humanitarian needs for children from the politics and policies surrounding immigration and immigration reform."

McCarthy was among Maryland religious leaders Gov. Martin J. O’Malley called to Annapolis July 21 to discuss the state’s response to the masses of Central American children and youths who have crossed the U.S.-Mexico border illegally without parents or guardians.

"What the governor recognizes is that this crisis is about the inherent dignity and worth of every person," McCarthy said. "Who better to speak and give voice to the needs of children than our religious leaders?"

National Catholic leaders have called for a compassionate response to the youths who have crossed the border, many of whom are fleeing drug-related violence.

The Pew Research Center estimates that more than 57,500 unaccompanied children and youths crossed the border illegally in the nine months between Oct. 1, 2013, and June 30, 2014, an increase from 38,700 youths in fiscal year 2013. Its July 22 report shows that children 12 and older are the fastest growing group of unaccompanied minors crossing the border.

Catholic Charities announced in a July 16 memo to staff members that it was preparing a federal proposal to house up to 50 immigrant children and youths, drawing on the expertise of St. Vincent’s Villa Residential Treatment Center in Timonium, the Esperanza Center in Fells Point and its other programs.

The agency is proposing to house the minors at St. Vincent’s Villa, a residential treatment center for children who have experienced abuse, trauma or neglect.

The facility differs from other Maryland sites the federal government has proposed to house the minors because, McCarthy said, St. Vincent’s Villa has always housed children and would need few modifications to be ready for new residents.

McCarthy expects Catholic Charities to begin making necessary changes to the facility before the grant is awarded, so that it is prepared to accept minors as soon as possible.

Grant applications to house the minors are due Aug. 5 to the Department of Health and Human Services’ Office of Refugee Resettlement. McCarthy said up to 60 grants are expected to be awarded nationally and would take effect Oct. 1. He does not know when Catholic Charities will be notified if its proposal has been accepted.

Catholic Charities’ announcement came less than a week after anti-immigrant graffiti was found on a former armory in Westminster under consideration by federal officials as a site to house the minors. O’Malley, who has been working with the White House to house the unaccompanied minors in Maryland, reportedly asked the officials not to consider Carroll County because of anticipated negative community reaction.

McCarthy acknowledged St. Vincent’s Villa could be the victim of a similar crime, but he thinks it’s unlikely, given the facility’s history of caring for children and its location in Baltimore County.

Many of the children in those early orphanages’ care were those whose parents died as they emigrated from Europe to the U.S., McCarthy noted.

The Esperanza Center began as a center for Cuban refugees, McCarthy said. The 50-year-old center, now offers a variety of resources for recent immigrants, many of whom are from Central and South America. Most of the unaccompanied minors are from Guatemala, Honduras, El Salvador and Mexico.

"We’re doing the right thing," McCarthy said. "We’re just continuing what we’ve always done, so how could people object to that?"

Wiering is a staff writer at The Catholic Review, newspaper of the Baltimore Archdiocese.